HomeLatest NewsHe managed to share his fortune and left the collection 2023: the...
Latest News

He managed to share his fortune and left the collection 2023: the rebellious fashion designer Vivienne Westwood, even after death, declares 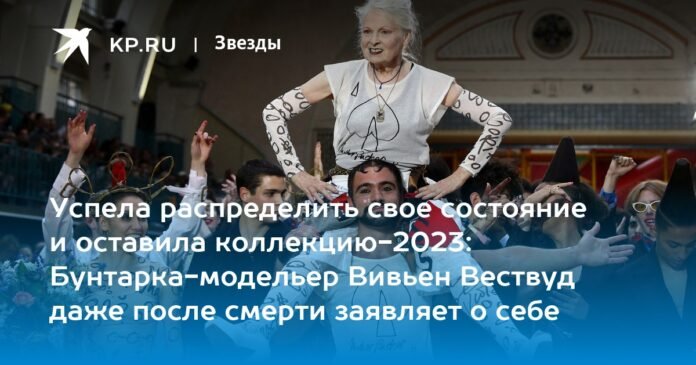 British fashion designer Vivienne Westwood has died at the age of 82 in her London mansion surrounded by her family. The Westwood family will continue their fashion business. The fashion designer was in charge of bequeathing her fortune in excess of 50 million dollars in advance, she divided all of her between her husband and her children. This designer’s career developed outside the box and began with the creation of a punk style in haute couture. Vivienne Westwood managed to leave a new clothing collection for 2023.

OUR STARS ABOUT VIVIENNE WESTWOOD

Silk dress brand Vivienne Westwood can be bought for 60-80 thousand rubles. Haute couture evening gowns cost four to five times as much. In the dresses of the Vivienne Westwood brand, the western stars walked the red carpet and got married. Our celebrities also have outfits from their brand in their closets.

Top stylist Anvar Ochilov in a conversation with KP.RU described the things that this designer created: “Vivienne Westwood created creative things from the very beginning of her career to her mature years. With age, she has not stopped setting trends among young people. Her talent and her desire to do something of her own, unusual, has not disappeared over the years. She was also distinguished by the fact that she knew how to feel colors, she was not afraid to play with bright color palettes. Her 2023 collection of hers is luxurious outfits that will remain relevant for a long time. The lyrics are unforgettable. She had delicate taste. Modern designers don’t know how to be so unique and subtly sensitive to the era. Vivienne Westwood will remain unique among the great fashion designers Yves Saint Laurent, Gianni Versace, Karl Lagerfeld. She said: “It’s better to dress secondhand than the mass market, where all things are the same.” Vivienne Westwood created original things: both vintage and modern, all unique.

Ksenia Sobchak has Vivienne Westwood outfits in her wardrobe: “We urgently need to find her vintage dress, in which I interviewed Jack Nicholson at MIFF. There were always few outfits of hers in my wardrobe, but they were all the other way around. Vivienne Westwood was great, they don’t make them like that anymore. The irrepressible energy and the desire to do what she likes, and not what the sellers demanded, did not leave her until the end of her life. Perhaps this was the secret to her success. Rebellion and the desire to create despite everything. She was not accepted, but she founded her own style and firmly secured her place in fashion. She starred in “Tatler” in the image of Margaret Thatcher, came to the presentation of the order to the queen without underwear, and hers her son Joseph from her founded “Agent Provocateur”. The scale of her personality was so large that she went beyond the podium: she made political statements and advocated for eco-activism. She once said: “I’m not very interested in beauty. It moves me more when a person understands himself. She understood herself 100 percent.

People’s Artist Nikolai Tsiskaridze congratulated Vivien on her 80th birthday last year. Tsiskaridze met Westwood in 1998, when the artist was 25 years old: “I remember this meeting, like now! And I suffer along with the entire creative world!” Nikolai Tsiskaridze told his telegram channel about working with a fashion designer: “There was a moment in my life when I took part in her show. It was in London. After the test, Vivien said: “You look so good! Why do you need ballet? You have to be a model.” She was surprised at how hard I make a living, when I was able to build a fast and successful career in the modeling field. I was 25 years old and I joked that I was too old, to which Vivien demurred: ” You can still do it!”

Nikolai Tsiskaridze walked the runway at the Vivienne Westwood show at the age of 25. Photos – social networks,

Nikolai Tsiskaridze is familiar with Vivien’s collections and characterizes them this way: “The secret of happiness, style and beauty that she revealed to us, her viewers and fans is very simple, as the creator herself formulated: “The secret is in self-sufficiency. In the ability to be a person, in the ability to be happy with yourself. It’s hard. But everything else life will give you as a gift. She definitely was always honest with herself, original and free, she gave the world a bold new style that still inspires modern fashion designers. Vivienne presented her first clothing collection to the world when she was already over forty. Westwood called it “The Pirates.” When creating it, she was inspired by the romanticism of the Victorian era. Models strutted down the runway in pirate hats, long buckled boots and baggy pants with a nautical print.”

In her youth, Vivienne Westwood worked as a primary school teacher, and in her spare time she made jewelry that she sold through a small stall. Already then she sewed clothes, for her and her friends. She left teaching and took over the main business of her Vivienne’s life after 30 years, when she began living with her second husband (in civil law), fashion designer and underground musician Malcolm McLaren. Together they devised the “punk look”, a style of clothing for the punk movement. In 1971 they opened a clothing store for bikers and punks. In 1976, McLaren became the manager of the punk band the Sex Pistols and, with Vivien, he designed the style of clothing for the band’s musicians. Her shop later became known as “Seditionaries” (“Everything for Rebels”). Westwood and McLaren came up with their own version of kilts (custom kilts), strappy shirts and PVC clothing. Westwood became popular after the launch of her famous T-shirt: she features a portrait of Elizabeth II with a safety pin in her lip. The shirt was designed in ’77 for the Sex Pistols, who released the single “God save the Queen” to commemorate the 25th anniversary of the Queen’s reign. Bold creativity did not prevent Vivienne from receiving the Order of the British Empire from the Queen herself 15 years later.

Vivienne Westwood was an environmental activist.

The designer created her clothing label Vivienne Westwood in 1981. In her early collections, Vivien devised a “pirate fashion” look: puffy shirts and tasseled cummerbunds. In the 1980s, she introduced the layered vest, shirt, dress and legging combination that became a wardrobe staple for a decade. At the age of 50, Vivien married her former student, the 27-year-old Austrian designer Andreas Kronthaler. After this event, her clothes become more elegant, but she is still just as creative. Vivienne Westwood influenced fashion throughout the years: she was the first to use rubber in clothing, sew with the seams turned out, tuck the head into the armhole, put underwear over the dress… Vivienne devised the pencil skirt (“tube” skirts). long before they were sold, and her mini crini anticipated puffball mushrooms. Westwood was not offended: “All my ideas are reproduced by other fashion designers in a softened form. They say my clothes are too extravagant, not to be worn. But no one can say that what I do is bad.

Actress Sarah Jessica Parker insisted that in the series “Sex and the City” her character marry in a Vivienne Westwood dress. box series

In fall 2022, the Vivienne Westwood Spring Summer 2023 collection was shown as part of Paris Fashion Week. The show was opened by Irina Shayk, a supermodel who walked the runway in a black latex strapless dress and boots white high tops with rhinestones. Another Shake image is black latex with white silk and giant beads. Bella Hadid showed off a voluminous white jacket, a pleated miniskirt and stiletto heels. We will wait for the echoes of images in other collections. The business of the Vivienne Westwood fashion house will continue with her family: husband Andreas Kronthaler, two sons (from the first two husbands) and a granddaughter.