HomeLatest NewsHe prattled on the support of the nationalists: a party in Dubai...
Latest News

He prattled on the support of the nationalists: a party in Dubai turned into a disaster for Valery Meladze 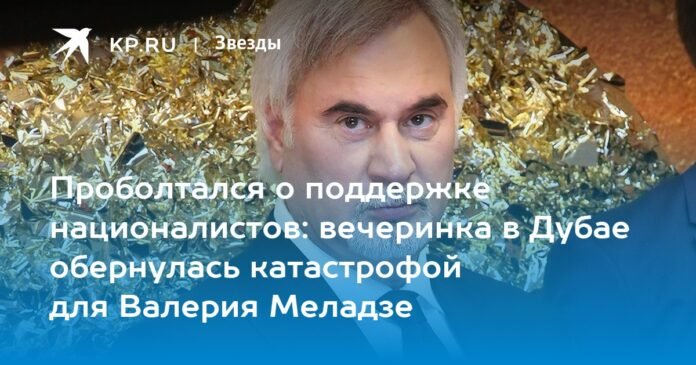 Meladze tried to justify himself by muttering the phrase that he was “out of politics.”

It seems that from the heat of the Arabian sun and easy money for corporate parties with the rich, our stars finally relaxed. And in vain. So, the New Year’s party in Dubai turned into several grandiose scandals at once: Oleg Gazmanov is now hated for refusing to support the special operation, and married Alexander Revva for dirty dancing with a millennial millionaire.

But all this is flowers in comparison with the catastrophe that Valery Meladze prepared for himself. Then, between songs, one of the spectators, apparently from Nezalezhnaya, asked the artist to send greetings to his wife on camera, and then shouted a nationalist slogan. And then Meladze, clinking a plastic glass with a fan, answered him. At this time, the artist prudently took the microphone to the side, but, judging by the enthusiastic cries of the fan “Oh! Gorgeous! I love you!”, the crowd around him clearly heard everything. However, Meladze then tried to justify himself, muttering the catchphrase that he was “out of politics.” But no one was interested in that…

The scandalous video ran through social networks in a matter of minutes, and the reaction was immediate. In the comments, not only yesterday’s fans of Russia, but also politicians of the highest level demand that the singer be punished with all rigor. For example, to deprive him of the title of Honored Artist of Russia, which he received in 2006.

And Senator Elena Afanasyeva even demands to take away the Russian passport from the disgraced singer.

“For this, Meladze should not be deprived of titles, but of the citizenship of the Russian Federation,” wrote a member of the Federation Council on his Telegram channel.

However, the penalties for an artist can be very diverse. So, some public figures are calling for Meladze’s entry to Russia to be banned, others – to remove her songs from all television and radio broadcasts. And the National Fund for the Protection of Historical Heritage is already preparing an appeal to the Ministry of Culture and the Ministry of Justice of the Russian Federation to demand that Valery Meladze be recognized as a foreign agent.

Share
Facebook
Twitter
Pinterest
WhatsApp
Previous article
During the holidays, an ambulance in Rostov was called 1100 times KXan 36 Daily News
Next article
UFC showed the official poster of the tournament, which will host the fight between Makhachev and Volkanovski (photo)