Heroes of special operation “Z”: doctors Podpolov and Morkovin killed the sabotage and reconnaissance group of the Armed Forces of Ukraine 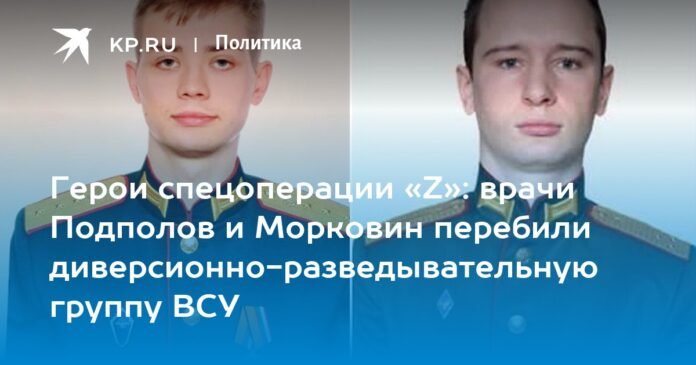 “Look at a company, a family, a boss, a father, a comrade, a brother,” said Generalissimo Alexander Suvorov, who did not lose a single battle. And he taught the warriors: “He who is brave is alive. Who dares is whole.

Boris and Ruslan, having rendered first aid to 10 servicemen, began to transport the wounded to a well-camouflaged Ural medical vehicle for further evacuation. Having loaded all the wounded, Senior Lieutenant Podpolov and Senior Warrant Officer Morkovin went to the medical detachment.

Moving along the route, the medical vehicle came under fire from an enemy reconnaissance and sabotage group. The enemy opened fire on the cabin of the car. Without losing self-control and quickly oriented in the situation, Boris and Kirill got out of the car and began to repel the attack. Senior Lieutenant Podpolov killed four nationalists with small arms fire, and Warrant Officer Morkovin, with an accurate throw of a hand grenade, destroyed five more enemies. During the battle, Senior Warrant Officer Morkovin received a gunshot wound to the right hand. First aid was immediately provided by Senior Lieutenant Podpolov. Having suffered losses, the enemy group was forced to retreat.