HomeLatest NewsHomemade borscht and porridge for our fighters: a Crimean resident with volunteers...
Latest News

Homemade borscht and porridge for our fighters: a Crimean resident with volunteers prepares natural dry rations for the military in the NVO 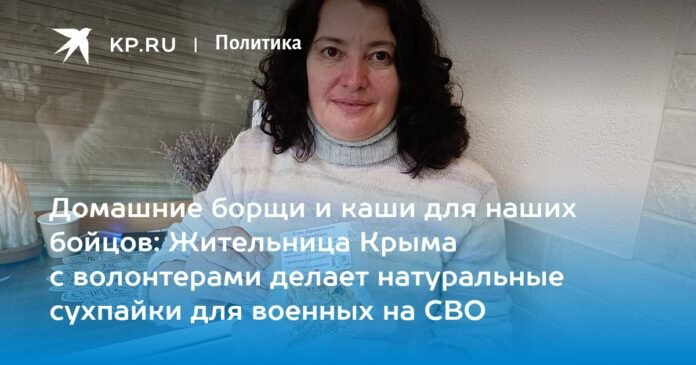 My apartment neighbor Yuri is a security teacher at one of the Simferopol schools. With the beginning of the SVO, he joined the ranks of the volunteers: he evacuated the inhabitants of Kherson, brought humanitarian aid to the front.

– Do you know which is the most useless of all humanitarian aid? he asks. I shrug in response.

– Cereals in packages, – says Yuri. – You bring kilograms, and the fighters shrug their shoulders. How can we cook them?

Soldiers do not always have the opportunity to cook hot food for themselves. Obviously, that is why Masha’s mother’s dry borscht – such a nickname has long been attached to the Crimean 53-year-old Maria Varlamova – became a real salvation. I pour a set from a bag into a cup, pour it with boiling water, after 15 minutes a really rich soup is ready. With vegetables, meat, almost like at home.

IN THE BEGINNING THERE WERE EXcavations

His friends say that care is his middle name. She was born in a small town near Kharkov. In his youth, he moved to Krivoy Rog, where he opened his own tailoring workshop. In the same place, he took under the wing of young apprentice cutters whom he called his mother. And after 30 years he moved to the Crimea, where he has lived for 22 years. Here she grew up and studied her only son, her grandson was born. María is a designer, costume designer. During the seasons she worked as a cook in sanatoriums. Recently, I have become seriously interested in psychology and astrology. Now he is conducting trainings for those who want it. That’s how you earn your living.

With the start of the special operation, Masha’s mother became a volunteer. I found lists in volunteer groups and bought what I could: bandages, cotton, medicine, food.

And in early October, the idea came to him: why not send soups to the front as dry rations?

The idea for dry soups was born from archaeological excavations. On such expeditions, Maria worked as a cook for 12 years.

In this form, Masha’s mother’s borscht is sent to the front.

“The conditions were extreme: a large plateau without a single tree under the blazing sun,” he says. – I had to go out and store the same vegetables for as long as possible. Carrots and beets were dried in the sun, and preparations were made in advance at home in dryers.

Housewives have long been popular with special dryers in which vegetables, fruits, mushrooms can be dried for the winter. In scientific language, this is called dehydration (complete removal of moisture) and dry ingredients are called freeze-dried.

For two months now, dozens of people have been participating in the project “Borscht, soups and porridge at the head of Masha’s mother” throughout Russia. Mostly women. They call themselves dryers, because their main task is to dry the ingredients for borscht and pack them into bags.

With love from Crimean women, dry soups are much tastier and healthier -doshirakoff-

You have already understood that any vegetables, spices and meat are pre-dried in dehydrators and mixed according to the recipe in various proportions. During the drying process, vegetables lose 90 percent of their mass. Due to humidity.

Volunteer sponsors bring bagged farm vegetables to Maria’s house. On average, 15-20 kilograms of carrots, beets, etc. Then other project participants come to Maria. In total, 30 dryers participate. They take the vegetables home and there they wash, peel and rub on a coarse grater. Some with their hands, others with food processors. However, before the borscht goes into the bag in a dry state, it goes a long way. Everything for borscht and other soups is heat treated and then dried. But it all depends on the specific products (see “Recipes of Masha’s mom”).

The shelf life of a vacuum-packed soup is about six months. But as long as everything dries to a crisp.

In just two months, more than 5,000 rations were sent to the front lines. The demand for dry soups and cereals was high. Orders come from everywhere. But the possibilities of the Crimean factory “Borschevichka” (as the project was nicknamed on the network) are not unlimited.

Cooking time for 500 servings is approximately one day, 20-24 hours. Additional costs – water and electricity. Maria receives decent bills. In November, for example, they counted 10,000 rubles for electricity and 5,000 rubles for water. As a result, the cost of one serving of borscht, taking into account electricity, water, and the cost of vegetables and meat, is 65 rubles. The rest of the soups come out a little cheaper.

For industrial production, a room with good ventilation is necessary so that moisture from vegetables does not settle on the ceiling and walls during drying. Second, good equipment, not household dryers. But a voluntary initiative has every chance of turning into a business that promises good profit with the right calculation.

PS I asked Maria Varlamova for a bag of beef borscht to try. On a business trip at the hotel for dinner – this is what you need. Pour boiling water into a container, let it brew for 10 minutes. During this time, the aroma of borscht spread throughout the room, it looked like ordinary homemade borscht. like too.

And most importantly – this is a piece of true home warmth and comfort.

How to properly dry vegetables and meat

These vegetables are laid out in a frying pan or saucepan greased with vegetable oil and stewed for 15 minutes over low heat. When the vegetables cool down, they are placed in the dryers. María has two industrial dryers at home. One was given on an indefinite lease, the second was purchased with money raised by volunteers. Vegetables lie in them for 6-8 hours. In household appliances, the process takes up to 10 hours. The result is a sweet and spicy sublime.

Cabbage is cut quite large by hand, strips about a centimeter. The shredder is too fine. Then the cabbage is sprinkled with a little salt, everything is gently mixed. After you need to put the cabbage for 5-7 minutes in the microwave. You can give juice – put it in a colander so that moisture in the glass. After – in the dryer for 6 – 10 hours.

Potatoes need to be chopped on a grater (or cut into strips if the soup is to be cooked in a cauldron), and then boiled in boiling water until tender. Salt. Then rinse with cold water and place in the dryer for 6 to 8 hours.

The most delicious is the smoked jerky for the pea soup. First, it is kept for 2-3 days in a special marinade (water with sugar, salt and spices). It is then cut into pieces and smoked for 8 hours. When the meat cools down, it is cut into cubes and placed in dryers for 8-10 hours.

Lean pork, beef, chicken or turkey is twisted in a meat grinder with a large mesh. Then it is fried in a pan with oil and spices until cooked, 15-20 minutes. Salt – at the last moment. After another 5 minutes of frying. Pour into a container in a thin layer, cool and send to dry. Dried to the state of sawdust. When poured with boiling water, dry lumps swell and give the taste of meat.

Pork carbonate must be cleaned of films and fat. Boil for 15 minutes, take out, dry. Wrap in foil and bake for 1.5 hours in the oven. Then cool completely, unroll foil, skim off fat that collects like jelly. Cut into pieces 3 – 3.5 cm wide, disassemble into fibers and send to dry. This type of meat is ideally soaked in boiling water.