HomeLatest NewsHow and when the special operation in Ukraine will end: military commander...
Latest News

How and when the special operation in Ukraine will end: military commander Steshin gave an honest answer 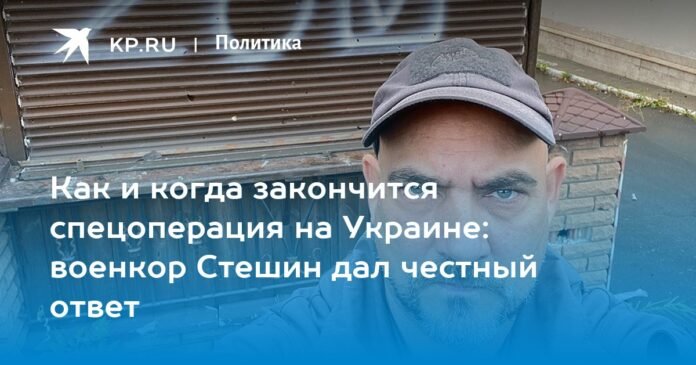 Dmitry Steshin spoke about the main

Let’s find a starting point. At what point did you realize that a military special operation was inevitable?

– Something sank in me when the incessant exercises of our troops in the border area began. The night of the start of the SVO my boss called me at 5 in the morning and said: “Are you sleeping? It began”. And I was already sleeping at the disposal of our battalion on two-story plank beds. It became clear that now we will move somewhere. Everything was ready, the columns were formed, I got a number for my car, and we are leaving.

– At what point did you realize that unpleasant times await us?

– All this time I was in Mariupol, where we won, we took thousands of prisoners. Why should we in this local sector of the front think that everything went wrong somehow? A man at war has a bit of tunnel vision, he only sees what’s in front of him. And then everything stalled. But one detail caught my attention. I went to the helicopter pilots in Valuiki, Belgorod region. He flew with them to attack the fortifications near the town of Prishib. And I was surprised how empty the roads are in the Kharkiv region. There was no usual movement of military equipment, troops. operational vacuum. We were too few for the new format of the special operation.

– What’s wrong with the format?

– We carried out a quick police operation against a country that was waging a merciless war against us.

Thousands of prisoners were made in Mariupol

“Wake up in Shafts”

– Did you assume NATO would get involved?

– Yes. Ukraine are porcelain hares on which the West trains to fight Russia. And how we appear in this special operation, how we end it, will depend on whether there will be a second series. There are analogies in history: the Finnish war.

– Tell me, do you have a specific answer to the question, why the West is really so taken advantage of for Ukraine?

– Because the West realized that an alternative center of power was beginning to take shape in the world. And in terms of the population in this center of power, the volume of industry, the West somehow loses a little, and the consequences can be unpredictable. Russia did not hide the fact that she was one of the initiators of the creation of a bipolar world, a kind of alliances of large states, alternative to the West.

Also, we are hated just for who we are. Too big and independent.

The West flooded Ukraine with weapons

– You have drawn parallels with the Great Patriotic War many times. Can you compare?

– I began to compare it since 2014, lying in Slovyansk in a hotel called “Ukraine”, in a house made of bulletproof vests. It’s just that my grandmother liberated these places, and then I thought: it’s good that she didn’t live to see this. Against us are the same flags and symbols, the same ideology, the strange superiority of one nation over another.

– What kind of nation is this?

– They are called “political Ukrainians.” They may not know the language, they have completely Russian surnames, but they are ready to shed their own blood for Ukrainian and as much as someone else’s – infantile, feminine. The other day one of the developers of the game STALKER, named Yezhov, died. A good “Ukrainian” surname. I met him in 2006 in the Chernobyl zone, then we talked sincerely. They wrote to me that already in 2014 he called to “kill Rusnya” and volunteered. I think now he would kill me without thinking.

Don’t give up the language.

– A natural question arises: how long, in your opinion, will all this drag on and how do you see the end?

– I will assume that it will end in the fall of next year and the end of the NWO will be military-political. There is no purely military solution, and there is no purely political solution either.

– Will we drive Khreshchatyk in tanks?

– Least. All Russian-speaking areas inhabited by Russian-speaking people must become Russian-liberated territories. In other regions, I would not be at all surprised if Ivano-Frankivsk suddenly votes in a referendum to join the Russian Federation. They are very practical people: Ukrainians.

– Wait, this is the western part of Ukraine!

– Yes, but I would not be surprised if they want to be pardoned and be with the Russian Federation. And you know what gives me hope? In 2013, when the Maidan began to relax, a survey was conducted. The questionnaires were all in two copies: in Move and in Russian. So, even in the most desperately western regions, people answered questionnaires in Russian. 80 – 90 percent. 83% in the Ivano-Frankivsk region. Of course, the situation has changed, but Russian culture, the Russian language cannot be shaken in a few years and cannot be abandoned.

Share
Facebook
Twitter
Pinterest
WhatsApp
Previous article
Look at your stomach: An unexpected harbinger of cancer has been named KXan 36 Daily News
Next article
The submission of requests for RTVE opinions opens in January