How Pelé got to Russia KXan 36 Daily News 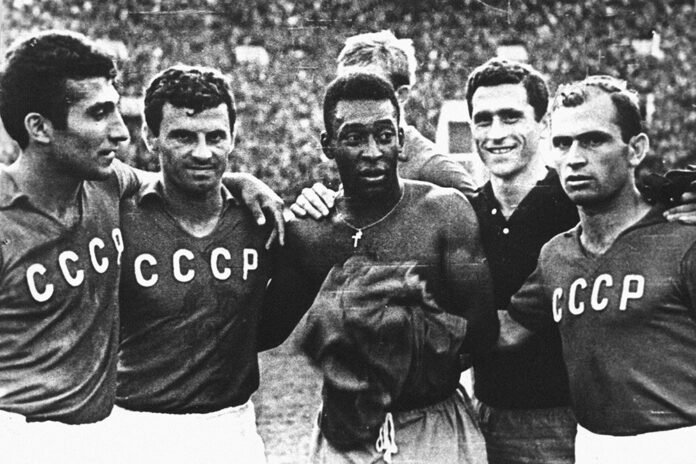 For the first time, Pelé came to the USSR in 1965 as part of the Brazilian national team. In “Luzhniki” eminent guests easily dealt with our national team – 3:0, and Pele scored a goal.

“All the 22 people who were in the training camp with the team dreamed of playing against Pelé. Me included,” recalls a participant in that meeting, former USSR goalkeeper Anzor Kavazashvili. “But in the first half I stayed on the bench. I could do with the Brazilians, because they did wonders and scored two goals for us. During the break, our head coach Nikolai Petrovich Morozov told me: ‘Anzor, go up to the goal.’ inspired field. There was confidence that neither Pelé nor other Brazilians would mark me. I had a great year in 1964 and 1965 also started well. And so I followed Pelé’s actions on the field. No one could keep him: neither Zhora Sichinava, nor Valery Voronin, nor central defender Zhora Ryabov. I remember how he scored on me. He takes the ball in midfield and begins to go around our players one by one. He approaches our penalty area. The last hit: Ryabov – in one direction, Pele – in the other and it goes one on one. I feel like now he’ll take one more step, he’ll drop the ball for a second, and I can. He lets go of me, I go flying – and my initial speed was very high – and in a jump over him. And Pelé removed his leg, put the other in and threw the ball over my head. head. The fact that they scored a goal for me, I understood from the noise of the stands. Soviet fans fell in love with Pelé so much that they welcomed his goal. I am often asked about the most memorable moment of my career. So, this is when Pelé scored a goal for me.”

Friendly football match between the national teams of the USSR and Brazil at the Central Stadium. VI Lenin in Moscow. Photo: RIA Novosti

Anzor Amberkovich was lucky enough to speak with Pelé in 2003, but already outside the soccer field. “It was the anniversary of the death of Lev Yashin, whom Pelé respected very much. We brought together veterans, 15 people, bronze medalists, world champions in 1966. Among us were European champions and Olympic champions. And yet we were all getting closer to him as a deity to greet him, embrace him”.

Before that, Pele visited our country two more times. In 1988, the Brazilian opened the Moscow Golf Club and in 1997 he participated in a publicity tour to promote the Brazilian coffee with his name on the label.

The 2003 visit was also remembered separately by former Russian national team striker Dmitry Bulykin. Pelé drove to the old Dynamo stadium, where Bulykin presented the Brazilian with a Dynamo jersey with the tenth number and last name.

“This meeting made a great impression on me,” recalls Dmitry. “The king of football in Moscow. After all, when you take pictures with him, and then he talks about you on Channel One, this gives a powerful impetus for development. We talked to him for only about five minutes. But it was clear that the man is very kind. So everyone tried to ask him something, tell him something. He praised me for three goals with the national team. He continues, he says, in the same. spirit, go to your dream And these words, to some extent, influenced my future career.

The next time Pele came to Russia in 2014. In Krasnodar, he launched the “Play like Pele” campaign, and also visited the academy of the Krasnodar football club. It was then that the famous Russian journalist Igor Rabiner was lucky enough to conduct an exclusive interview with Pelé.

“It happened that I had to talk to Pele together with two journalists already directly at the academy. But the first colleague was given a separate interview, and the third journalist was late at the appointed time. And I got a 12-minute exclusive.” ., although Pelé spoke calmly, relaxed, smiling and ready to continue communicating. Feelings: absolute positivity, very friendly attitude with the interlocutor. No bragging, no arrogance, to which someone, and he had every right. Kind-hearted person. Much was said about his relationship with Yashin, I remembered that it was Lev Ivanovich who first predicted that Pelé would become the best player in the world. Of course, he wanted to talk more, but the happiness was endless anyway.

Finally, the last time the King of Soccer visited our country was in December 2017, when he was invited to the World Cup draw. Pelé was accompanied by a whole retinue of football stars, among whom was our Alexander Borodyuk, a former footballer and coach.

“Yes, we talked,” says Alexander Genrikhovich. “But what I remember were the words of Maradona, who then hugged Pelé and said: ‘The only person who can be called the king of football is Pelé.’ he wanted to talk, he was met with warmth and kindness. Separately, I note modesty from him. I remember that I came up with Viktor Vasilievich Losev, asking to be photographed together. Him, no problem. He hugged us. It seems to me that such people are very often. modest. Modesty emphasizes greatness. At the same time, his class was visible on the football field: dribbling, speed, hitting with both feet, the ability to play for the team – he possessed all this at the highest level. I believe that if a person is great, then great in everything. Both in human and in sports. On the latter: no footballer has yet managed to be a three-time world champion. Now many compare Pelé with Maradona, Messi and others. But, it seems to me, Pele’s three world titles speak for themselves. Light Putting the memory of him as a footballer and as a person “.

Share
Facebook
Twitter
Pinterest
WhatsApp
Previous article
Bvlgari launches a Christmas campaign for the Chinese New Year
Next article
Buzova and Batrutdinov are together again: the secular premiere of the comedy “Self-Irony of Fate” took place in the capital