How social networks affect children’s brains: a function on the web completely changes a child’s behavior 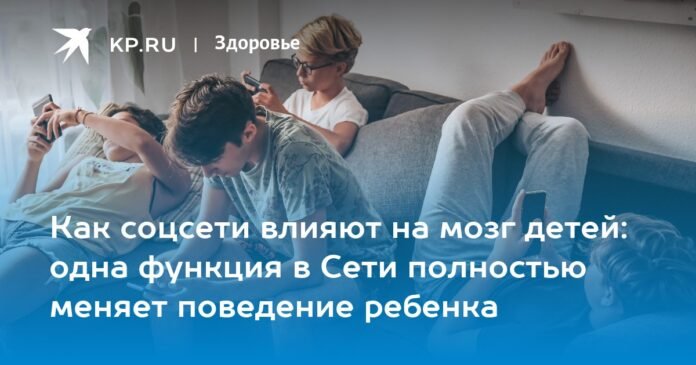 Scientists note that teens who are always checking their social networks become hypersensitive to comments from their peers.

Scientists at the University of North Carolina studied the brains of 169 adolescents from different adolescent schools (with an average age of 12 years) using MRI for three years. They wanted to understand whether frequent viewing of social networking sites is associated with changes in functional brain development in adolescents. In a nutshell, what happens in the brain when kids expect likes under their posts. And the other day, the study was published in the medical journal JAMA Pediatrics.

Social media platforms provide adolescents with unprecedented opportunities for social interaction during a critical period of development when the brain is especially sensitive to social feedback, say the scientists: one of the study’s authors is associate professor in the Department of Psychology and Neurology Eva Teltser. “Particularly sensitive areas of the brain are those that respond to social rewards.”

The researchers studied the change in the brain and behavior of adolescents who tried three social media platforms (Facebook*, Instagram* and Snapchat). Some did it no more than once a day and others more than 20 times a day. The adolescents underwent functional magnetic resonance imaging (fMRI) of the brain. During the scan, they saw a signal about what kind of likes they would receive: encouraging, neutral, or negative. The scientists took pictures of the children’s brains and, over time, saw clear changes in certain parts of the brain of those children who reacted sharply to the number of likes.

Scientists note that teens who are always checking their social networks become hypersensitive to comments from their peers. “Over the years, your brain becomes more receptive to expected feedback,” the scientists note. In fact, a complete dependence on “likes” is being formed.

But how this will affect future behavior scientists cannot yet predict. This is likely to affect adult life as well. Or maybe the teenager will outgrow this addiction.

But the scientists say more research is clearly needed to explore the long-term links between social media use, adolescent neurodevelopment, and psychological adjustment to understand the impact of social media on adolescent development of today.

* Belong to Meta, an organization recognized as extremist and banned in Russia.