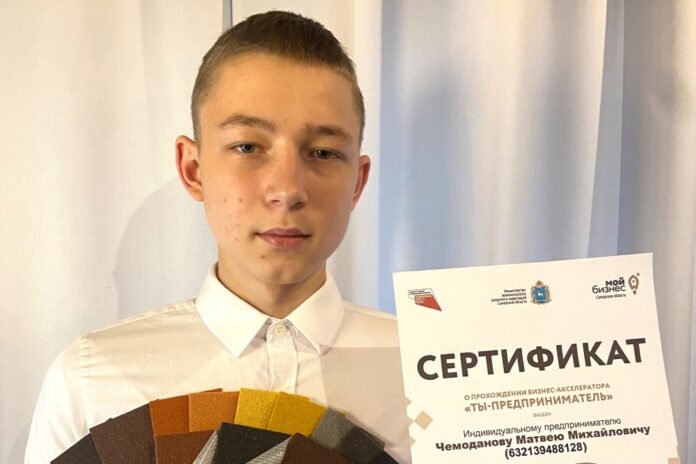 Matthew is 14 years old. He is a student and businessman. His unusual project is recognized as promising. Matvey produces flexible bricks, thermal panels and decorations. Photo: Mikhail Chemodanov

The boy’s parents are in business. Father – the production of chemicals. Mom works for a big company. The house where the family lives is made of modern materials. As Mikhail Chemodanov said, together with his son they discussed which outer decorative layer to choose. We decided on flexible bricks and thermal panels. They bought franchises and began to refine. This is a fairly new technology. Such a house looks like a brick house, you can choose any color, and it is cheaper than plastering. Matvey became interested in technology and how a business can be built on it.

Within the framework of the national project “Small and Medium Entrepreneurship”, young entrepreneurs between the ages of 14 and 25 can receive a grant to create or develop their own business. Before winning the right to financial support during the competition, the youngsters receive training. Matvey gained new knowledge and met other young entrepreneurs in the Togliatti center “My Business”, he managed to create a business development project. I was very worried during the defense, but I was able to answer all the questions about the new technology and win a grant.

The funds were used to purchase two machines and accessories for them. The first will allow you to automatically make flexible bricks. The second is suitable for cutting polystyrene, which opens the possibility of manufacturing thermal panels and decorative details. The plans are to expand the order book and bring production volumes up to five thousand square meters per month.

Matthew is 14 years old. He now he is decided with the choice of profession. He loves exact sciences, physical education, he is interested in programming, modern technologies, even in the construction industry.

– The scholarship program opens the door to entrepreneurship for those who have more difficulties starting their own business, including young people. More than 2,500 scholarships worth about a billion rubles have already been issued this year, of which more than a thousand scholarships are awarded to young people under 25 years of age.