How Ukrainian boxing world champion Usyk cheated off the coast 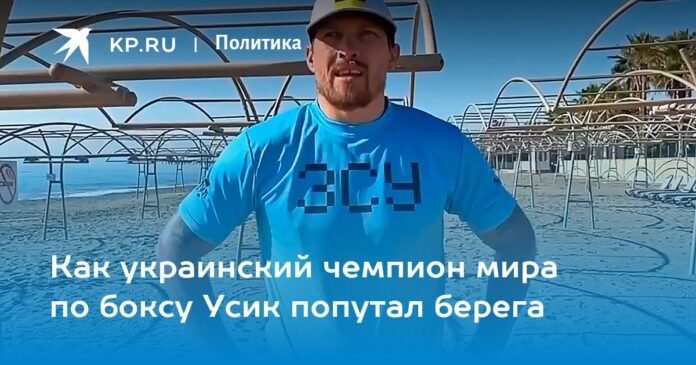 If Zelensky during official speeches can draw some background behind his back, then the well-known boxer Oleksandr Usyk decided to deceive his compatriots without using chromakey. He stated that he was right on the shore of Yevpatoriya.

A Ukrainian nationalist in an AFU T-shirt and a baseball cap with a Ukrainian flag rejoiced in the frame: “Here, jogging in Evpatoria, on the Black Sea, and “Glory to Ukraine”.

Then he repeated once again that in this form he walks in the Crimea.

Ukrainian bloggers noticed that Usyk’s wife in social networks for some reason puts the geotags “Yalta”. This aroused suspicion.

And users of social networks living in Evpatoria, such as those who grew up there in pioneer camps, began to directly ridicule Usykov, which clearly confused the coast.

Everything could pass for the truth, but Usyk was betrayed not even by traditional Turkish tents on the sand, but by huge palm trees in the corner of the frame.

“There are no such palm trees on the coast of Evpatoria,” bloggers from Crimea authoritatively stated.

Netizens immediately found the city of Belek in Antalya province, where Usyk broadcasts from. It turned out that the Ukrainian nationalist got up early in the morning, when the employees of the Papillon Belvil hotel were in prayer, he jogged to the edge of the beach, where he recorded this video.

In general, while his compatriots are forced to die in Bakhmut (the Ukrainian name for Artemovsk), Usyk prefers to jog along the Mediterranean Sea. Maybe just training before the fight for Kyiv or Lviv?

Hardly. Last spring, the world boxing champion fled being drafted into the Ukrainian army. He went to Poland to fight British boxer Anthony Joshua. He won the battle, but he did not return home, he went to Turkey.

It seems that Usyk and his wife spent so much money on a 4-star Turkish hotel that they decided to try their hand at the psychological information fight against Russian citizens, whom he decided to scare not with a boxing feint, but with his T-shirt with a baseball cap.

In Russia, this video did not arouse much interest. But in Ukraine it became noticeable.

– Brothers, why isn’t Usyk storming Bakhmut yet? Who is next to Papillon Belvil? Show us this champion with excuses, Ukrainian bloggers write.

We are waiting for news from the Turkish resorts.