Hundreds of Canadians celebrated Christmas in supermarket due to snow storm 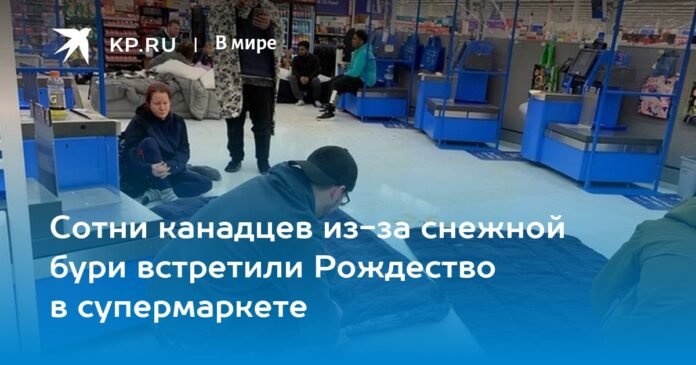 Caught in an unusual trap, shoppers met Christmas in the same supermarket: mattresses were inflated and the table was laid.

The snowstorm that hit the north of the American continent left many Americans and Canadians without Christmas. Thousands of houses were left without electricity, entire cities were covered in snow, so the work to clear roads and access roads continues.

On the eve of the major winter holiday for many New World residents, hundreds of Canadians living in southern Ontario headed to the nearest hypermarket for pre-holiday shopping.

But the bad weather broke out in such a way that they could not leave the premises of the mall, and had to celebrate Christmas directly in the store, writes CBC. Vendors and cashiers were also unable to return home due to snow on the roads.

It was decided that everyone who found themselves in an unusual trap would celebrate Christmas right in the supermarket: the mattresses were inflated, the table was laid, the decorated Christmas tree was moved from the front door to the center of the trading floor. Children were looked after separately – they were allowed to take any toys from the counters and shelves as a gift. And at midnight, the store employees put on an impromptu performance.

Later it turned out that more than 100 people met Christmas in this way, and many of them live almost within walking distance of the hypermarket. But the blizzard brought large snowdrifts so quickly that none of them could return home either by car or on foot.

The next day, the store’s management issued a statement thanking the “prisoners.”

– Our customers are amazing: they sang Christmas songs to keep themselves in a good mood! -she says.