HomeLatest News"I celebrated in such a way that I don't remember anything": Sergey...
Latest News

“I celebrated in such a way that I don’t remember anything”: Sergey Zhukov told how he celebrated the New Year as a student 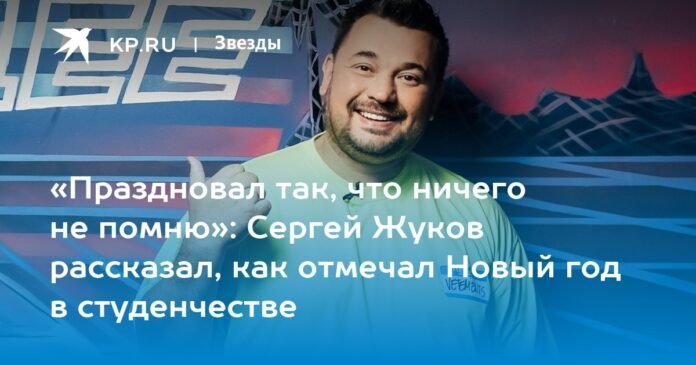 Sergei Zhukov spoke about the New Year’s celebration. Photo: from the artist’s archive

The second season of the author’s series by Sergei Zhukov “Evgenich” on the TV channel “Friday!” collected the most unexpected combinations of stars of the Russian show business. According to the plot of the series, a ’90s producer, played by the lead singer of Hands Up!, disappears from sight after a scandal, and 30 years later decides to come back and write undercover hits for Russian pop stars. In the new season these are Nikolai Baskov, Stas Kostyushkin, Basta, Shura, as well as young bloggers.

Before the release of the New Year’s episode of the second season, Sergei Zhukov told the most interesting behind-the-scenes cases, for which he appreciates Nikolai Baskov, how he celebrated the New Year as a student and why Shura helped him make repairs in the new karaoke bar.

Sergei Zhukov and Nikolai Baskov on the set of the TV series Evgenich. Photo: from the artist’s archive

COLLECTED ALL THE STARS OF THE SHOW

– Sergei, in the series “Eugenich” you have collected a whole parade of stars. How did you choose who to invite?

– Assembling such a composition at the right time in the right place on the set is perhaps the most difficult part of the filming process. This year we broke our record. 48 stars starred in the second season of Evgenych. The main criterion is that they are all wonderful people who know how to joke, laugh, have a sense of irony and are good friends with Evgenich.

– Tell us about filming with Nikolai Baskov. What is your relationship with him in life?

– Kolya has a great sense of humor, knows how to laugh at himself. The very fact that Kolya is filming with us in the image of Yevgenych, in Yevgenych’s wig, and in Yevgenych’s sweater, which is three sizes larger than him, speaks of his healthy irony. We had a great atmosphere during the shooting days. We all joked, laughed and with the same emotions we went to shoot. Therefore, the audience should definitely feel our vibe and be charged with it. And what a song I wrote for him! Have you heard “I am the king of sales”?

What shooting day do you remember the most?

– For example, with the hockey player Sasha Ovechkin, who lives in another country and rarely visits Russia. Sasha performed the song right in my trailer, in which a mini-studio was set up. Despite the conditions of the hike, it turned out great and successful!

Or, for example, on the first day of shooting we were shooting a fishing scene with Shura. She was trying so hard to remember her text that from stress and responsibility she constantly mixed up some words, and we shot take after take. At the end of filming, the fish we hooked up and pretended to pull out of the reservoir was completely unpresentable. At the same time, the entire film crew laughed at the amount of humor and jokes Shura made.

– What awaits the audience in the New Year’s series?

– It will include both superstars: Basta and Igor Sukachev, the champion of KVN Dmitry Kolchin, and young and talented stars and stars that are relevant today: Vanya Dmitrienko, Katya Iowa, Mary Goo. With them we will perform authentic hits that everyone loves and listens to at every festivity. And there will be an accident with Evgenich, which will return it to 1992. In general, look, it will be a lot of fun, musical, driving!

Sergei Zhukov: “We were classic students: hungry, cheerful and open to adventure.” Photo: from the artist’s archive

A PLACE TO SMART SMOOTHING

– Sergey, let’s talk now about the New Year. How do you usually celebrate?

– I always celebrate the New Year with my family. On the night of 1/31, like my colleagues, I have work to do, but at the sound of the bells I am always with my loved ones. I have not changed this rule for many years. A huge table where my relatives gather, New Year’s sweets, a Christmas tree, fireworks – what could be better. And then we give each other gifts. I celebrate the New Year at home and then I will go to the performance. Maybe it will go through one of my “Hands up! Bars”, of which there are already so many in Moscow and throughout the country. Well, for the New Year holidays, we will already be going on a trip with our family to warmer climates.

– And how is your New Year as a student? Were there parties in the companies?

I’m ashamed to admit it, but I don’t remember. I remember it was fun and loud. We were classic students: hungry, fun and adventurous. Most often, of course, we work on the New Year – we started DJing almost from the first course. And DJs are always expected to be able to make any audience stand up, as you know. And in discos, and at house parties, and in hostels. It was poor in the dorms, but everyone brought what they could, and this turned out to be a shared vacation. This year, on my birthday, I tried to recreate that atmosphere in our “Hands Up! Bar” on Taganka. For one day, it turned into a communal apartment of the 90s! It was very funny and sincere. All the guests appreciated.

Sergey Zhukov with his wife Regina and their children Nika, Angel and Miron. Photo: from the artist’s archive

– Approximately how much money do you need to comfortably celebrate the New Year and make gifts for the whole family?

– You know, the only opportunity to be close to your family, close and loving people is priceless. It doesn’t even make sense to evaluate it financially. We often make plans for the future, we work to get to something in many years. Sometimes you just need to stop, pause, and spend time with your family and loved ones. Of course, I did not forget about the gifts and prepared them for my family a long time ago. I think I guessed with everyone’s wishes.

– All wishes are made in different ways, but how are you? And what do you want for yourself in 2023?

– I’m definitely going to make a wish. The main thing is that all relatives and friends are alive and well. And some more wishes for me next year. Last year, I filmed the second season of the Evgenych series for the Friday! TV channel. In it I acted as a producer, scriptwriter and actor, and I want to continue developing in this business. We have a few more series and even feature films in the works. I wish to gather a full house in Luzhniki again in July 2023. On the old New Year, a new single from my son Angel will be released. I wish you a successful start and be heard by your audience. And on January 20, 2023, we open the doors of our new bar project “Evgenich” – this is the first karaoke glass in the country and named after our series. We have not seen such establishments yet, and I wish and believe that it will definitely become a favorite place for the Moscow public, where you can spend a delicious evening and swell smartly, as the slogan of our bar says.

On New Year’s Eve, Sergei Zhukov fulfills the wishes of his subscribers. Photo: from the artist’s archive

Do you know how it all started? We saw a classroom: in the center of Moscow, on the Old Arbat, I called the stars there, my friends from the Evgenich series: Shura, Volodya Sychev, Rita Abroskina, Lena Starostina and Igor Pidzhakov, handed them tools. to whom a drill, to whom a trowel, to whom a mallet and together we began to make repairs there!

– What gift will always cheer you up and what gift can disappoint you?

– I am always happy with gifts that are given from the heart. But most of all I love giving myself and getting great pleasure from it, seeing the joy in the eyes of my relatives and friends. Every December, I have an annual Santa Zhukov campaign on my social networks, when I fulfill wishes sent from all over the country by my subscribers, and they don’t know how happy the messages people send me after receiving gifts from Santa Zhukov make me. happy. For the sake of this, there is no money is a pity!

“Shooting is a complete force majeure” – Klava Koka and Niletto played Sergey Zhukov in the series. The director of the project, Kirill Papakul, told how the stars coped with their roles and shared exclusive videos from the filming (more)