“I give my entire pension for animal feed!”: Yuri Antonov came out for the first time after a serious operation 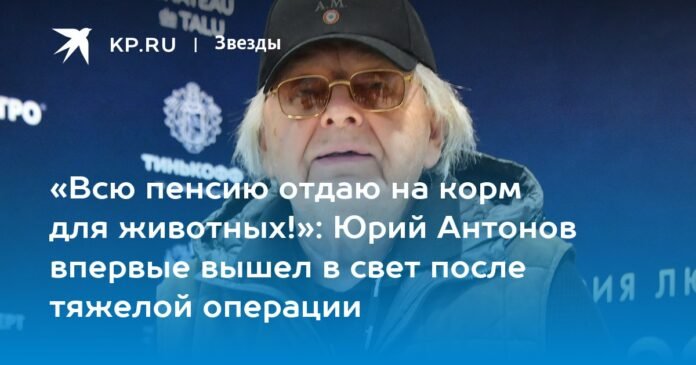 At the premiere of the program appeared 77-year-old Yuri Antonov. This is the first appearance of the famous master after a difficult operation.

On the New Year holidays, Tatiana Navka will show her new New Year’s ice performance “The Love Story of Scheherazade” at the Megasport Sports Palace. At the premiere of the program appeared 77-year-old Yuri Antonov. This is the first appearance of the famous master after a difficult operation.

– Antonov spent two and a half months in Austria for treatment. He has serious hip and knee problems-said to kp.ru Evgeny Morozov, head of the Ru-concert company-Maybe more operations are coming. The hip joint is serious business.

Yura had a 10-hour operation. But she bravely endured it.

Yuri Mikhailovich, in an interview with KP.RU, admitted that he feels much better.

– Yes, my leg still hurts, but in general everything is fine. I recently flew to Dubai for a consultation with a famous Chinese healer. He advised me some special herbal compresses, but he didn’t have these potions with him, I need to meet him again. Regarding the pain in the leg, the healer explained to me that these were the consequences of the operation, after rehabilitation it would be easier for me. Today I came to the Tatyana Navka show. Of course, she is the ice queen, a true Olympic champion, a beauty. She leaves on the ice and outshines all the artists.

According to Yuri Antonov, he will spend the New Year holidays visiting friends.

– I rarely cook myself, I have domestic helpers for this. But I can bake a duck, – the teacher shared. – New Year’s meeting with friends, far away. My relatives and children live abroad, they don’t visit me often, but I found my happiness in my animals. I have a lot of them. Coming soon another dog. The old man died, I found a similar mongrel on the Internet, so I’ll go after her. And I’m thinking of buying a deer. It is cheap – thirty thousand rubles. I’ll be fine with him, we’ll feed him. There is a beautiful forest around my house, and I will keep it there.

Yura had a 10-hour operation. But she bravely endured it.

As Antonov says, over the years of his career he has earned a good fortune, so he does not spend his pension (50 thousand rubles) on his own needs, he helps homeless animals.

I don’t help anyone with money. I spend my entire pension on food for homeless animals, the teacher told kp.ru.

In the new year, the artist will play music again. Yuri Mikhailovich was inspired by the success of last year’s duet with Grigory Leps “Beloved”.

– A new album is now ready to be released. People often ask me why there are so few new songs. Everything is very simple: over the years of my career I have recorded so many hits, such a huge repertoire that many artists have not had and will never have. Paul McCartney also does not indulge in new successes. Well, I recorded old hits when I was young, now the state is different. But I’m not afraid to grow old, I enjoy life, – shared the village artist.

“There are no changes for the better”: a serious illness turned Yuri Antonov into a recluse