HomeLatest News"I have only seen this in the films before about Stalingrad": the...
Latest News

“I have only seen this in the films before about Stalingrad”: the traveler volunteered for a special operation and honestly told what he experienced in the first battle 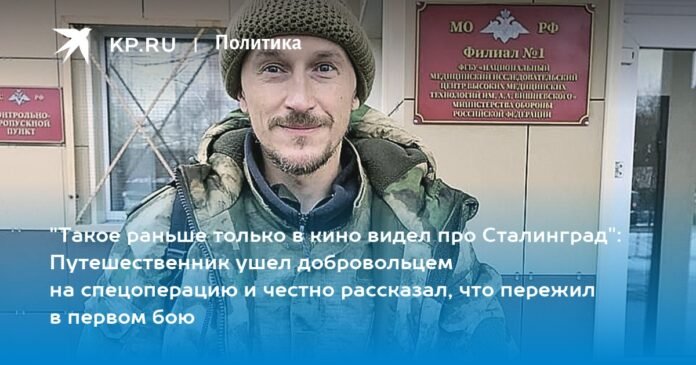 Gregory after being released from the hospital. Photo: personal archive

The fact that a frequent guest of the joint program of Radio KP and the Russian Geographical Society “Club of Famous Travelers” Grigory Kubatyan went to the NVO zone, we learned from the telegram channel of his fellow writer Zakhar Prilepin:

“At the beginning of autumn, Grigory Kubatyan, an excellent journalist, writer, military commissar, who also covered the events in Syria, a traveler who, it seems, explored the whole world, a real adventurer (we laugh that Grisha is the hero incarnated as Jack London), he left as a volunteer for Donbass,” Zakhar said. “We all found out yesterday, when Grigory, after being injured, finally found time to write about it…”

And he added in another post, listing all the adventures of the Russian traveler (see screenshot): “Hey, directors? Well, put aside for a minute your next “Leviathan” about the Russian drunk. Here is the finished story for you. Do Hollywood what you’re worth.”

The directors have not yet responded. But Radio KP answered, where Grigory went as soon as he was discharged from the hospital.

STAY AT HOME? SHE IS NOT BEAUTIFUL…

– Grigory, it turns out that you have returned from the most extreme trip of your life…

“I didn’t see it as a trip or an adventure. I had to work in the Donbass as a military correspondent. And then I realized that I had to take a closer part in these events, to protect our people, to protect my country, to fight Nazism.

The desire was strengthened when the partial mobilization began. Especially against the background of the fact that many healthy young people began to vote and go abroad …

– Has he been mobilized at all?

– No. I didn’t serve in the army for health reasons. Restrictions and over 45 years… But staying at home would be wrong and ugly of me. I’m a man with some survival experience…

– But why did you recapture the Donbass through Chechnya?

– So the volunteers were not so actively recruited. I started looking for options and it turned out that I have friends in Akhmat’s battalion. My former classmate, the platoon commander, suggested: “Come to us, we already have a well-coordinated combat group. In any case, we will help you, we will tell you. And so it happened.

– How did you meet in Grozny?

– Well received. In general, Akhmat himself is only one third purely Chechen, another third are men from other regions of the Caucasus, another third are Russians from other parts of Russia. There you can meet people from Karelia, from Chukotka, from the Crimea. Mostly from small towns or villages. When I said that I was from St. Petersburg, everyone was surprised: what are you doing here? Let’s say that in St. Petersburg it was possible to sit down and not go.

THE ROAD TO “AKHMAT”

– What motivated your fellow volunteers?

– Different reasons. Some, like me, go for patriotic reasons. The other part is practical.

– Are you talking about money?

– When I came to Akhmat, there was still no certainty about money. There were many guys who fell under partial mobilization, but they did not know which unit they would be sent to, under what conditions. And Akhmat is, as it were, a brand. There are no problems with the team, and you are, as it were, under the direct supervision of the Chechen leadership.

Age is also different. Mostly men over 40 years of age. But you can meet 60+. Such strong, bearded, serious, respectable Caucasian grandfathers who have already fought in all wars, starting with the Afghan one. But there were, of course, “first timers”, like me, without any experience…

THE BIRTH OF A BROTHERHOOD

– In general, a cross section of such a society …

– Exactly. You meet many different people for different reasons. But in general, in the army, all this is leveling out. Everyone acquires the same goals and objectives. And in general, they become, pathetic as it may seem, brothers. This appeal is purely military: “brother, little brother” – it is quite natural. You share everything equally. And share hardships, and food. And you help each other. And drag each other if necessary. If suddenly someone was injured, it is necessary to withdraw from the battlefield. Even at the risk of my own life…

I felt comfortable psychologically. Although at first I expected to find myself in an aggressive and strange environment. He was afraid to face half-hazing in relation to those who were useless… However, the attitude turned out to be the most kind, understanding. Everyone helped everyone, did the best they could.

Do you remember your first combat mission?

– Of course. We had a rotation, one week you’re at the unit’s location, one week, you’re on a combat mission. And in a month I had two battles. The second hurt me.

The first way out – we sit in ambush. They were simply in position in case of a possible advance of the enemy in order to hit him in the flank. The fights were close. There were mostly artillery and mortar duels. Drones flew, a very vile thing – it sees you day and night and can throw a grenade …

– And the second fight?

– It was a breakthrough, and a real fight. I’ve only seen this before in the movies about Stalingrad: everything explodes, and you drive somewhere randomly, running back and forth… And the snipers are working on you…

So somehow everyone came together, came to their senses, understood what to do …

The enemy tank caused a lot of trouble – it hit until dark. We receive the task – to destroy the tank in the morning, as soon as it becomes a nightmare for us again.

At night, we were apparently discovered by a drone with a thermal imager. At approximately 4:00 in the morning the shelling began. They hit very accurately. Shrapnel hit six; fortunately, no one died. And we had to get out of there.

I was hit in the thigh by shrapnel from one side to the other. At first, he walked quite fast, leaning on his machine gun as if it were a crutch. But the blood came out, it cannot be removed with a tourniquet, because the wound was very high. And now the blood is leaving, and with it the strength… Thank God, there was a guy with me with the call sign “Alex” – also with a wound in the leg, in the arm, in the lower part of the the back. He helped me. If it weren’t for “Alex”, everything would have ended very sadly, because I was moving slower and slower. And we must be on time before dawn; otherwise we will be in the field at a glance and we will be finished. And now “Alex” almost dragged me to the evacuation point…

Well, then several months of hospitals began. As a result, they put me on my feet, only I am no longer a fighter …

– That is, you will not return to the front line?

– I hope to return. At least as a war correspondent.

– And on the road of the traveler?

– Necessarily. When it’s all over Our victory.

– Did your rich expeditionary experience help you in any way?

– The hardships of the first line were not something shocking to me. Sleeping in a tent somewhere in the mountains in the cold, you can freeze to the bottom, you also sleep in a trench. You already know what you need to wear thermal underwear, how to dry, what to take with you. In that sense, the expeditionary experience did help.

WITH MY OWN EYES

During treatment in the hospital, Grigory Kubatyan began to write the stories of the guys who had been at the front and their impressions. Now you can read them on the reporter_shturmovik telegram channel.

Here is one of the excerpts:

There are so many happy and unlucky coincidences here that you start to believe in fate.

A grenade flew into the trench for a soldier. It didn’t explode, but it did hit the toes. He then walked around with a bandaged swollen thumb and cursed that it was hard to put on berets now.

A guy in our platoon bought himself a helmet and armor. And I doubt it, it is very difficult to walk in them. But he put him on a combat mission. One fragment flew into the hull, the other into the armor. He says it’s the best investment of his life.

A bullet shattered the butt of a soldier’s machine gun. He glued everything together, wrapped it with electrical tape. And in the next battle, the bullet flew there, and again the butt on the wood chips.