HomeLatest News"I want my father and brother back": Prince Harry complains that the...
Latest News

“I want my father and brother back”: Prince Harry complains that the family does not accept him after marrying Meghan Markle 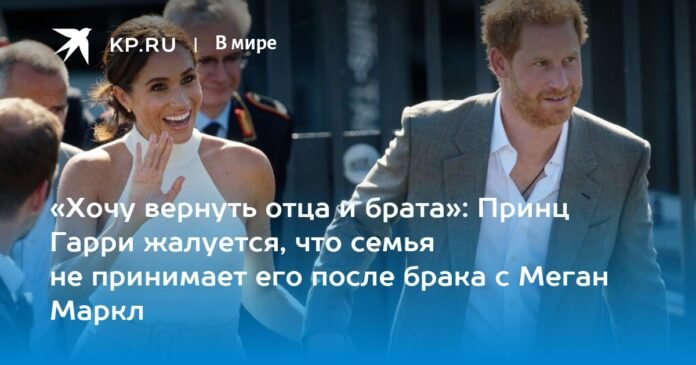 The gap in the Windsor royal family grows even wider. The resignation of Prince Harry and his wife Meghan Markle (as well as the flight to the United States) at Buckingham Palace was not perceived as a manifestation of love of freedom or banal infantilism, but as a betrayal. Especially against the background of the fact that the red-haired defector willingly distributes paid interviews from left to right. However, apparently, members of the royal dynasty are not averse to helping the British media drown Harry.

At least that’s what the prince said in an interview with the BBC.

“The family motto is: ‘Never complain and don’t explain anything’, but this is just a motto,” the Duke of Sussex emphasized. -They will talk to the correspondent, they will literally spoon him information, he will write a story and at the end he will say that he turned to Buckingham Palace for comment. But the whole story is the Buckingham Palace commentary.

In an interview with ITV, Harry admitted that relations with his father King Charles III and brother Prince William cannot yet improve. Which he sincerely regrets.

“I want to have a family, not an institution,” he admitted. “I want my father and my brother back.

The further, the more difficult it is to understand, is it really so or is Harry finally saying goodbye to his family trying to integrate into American society, causing a feeling of pity and empathy for himself? Does he really have the opportunity to speak openly and honestly with his family, or has he been written off the notebook? Is there any chance of getting to Buckingham Palace and not doing laundry in public? Or everything is well planned to extract commercial profit from the collapsed “family” project, and Harry gives up portions of suffering to last longer.

One way or another, an hour-long interview with the prince, the first for the United States in the 60-minute format, will launch the night of January 8 on CBS. In it, he also promises to shed light on the personal experiences and problems of the royal family in a conversation with local Andrei Malakhov – Anderson Cooper, a TV presenter and openly gay who deals with resonant topics.

It seems that the American press continues to settle the conflict between Harry and his relatives over the bones, making the most of the notorious competition of ambitions. The audience, eating popcorn and cola, sees it as a stage production at the Globe Theatre. And the bonds that Buckingham Palace so carefully and long built are cracking and crumbling under the yoke of hypocrisy, rancor and revenge of this oldest English family.

A couple of days after the hour-long CBS interview, Harry’s memoir will also be released, where there will be even more “real truths.” His name speaks for itself: “Spare” (“Replacement”).

Share
Facebook
Twitter
Pinterest
WhatsApp
Previous article
Ukraine’s military intelligence chief Budanov said that in the spring, Kyiv will launch an offensive KXan 36 Daily News
Next article
The worker will no longer have the obligation to deliver his medical leave to the company