“I want to work in Russia”: Panin, impoverished in Europe, asked again 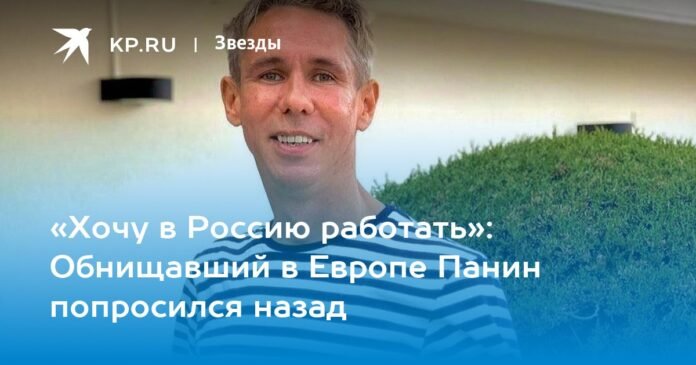 Alexey Panin moved from Russia to Spain in 2020. The actor bought an apartment in the tourist town of Torrevieja, near Alicante, for 70,000 euros (4,200,000 rubles). The artist took his daughter Anna abroad. Before the start of the special operation in Ukraine, Zvezda Zhmurok lived quite comfortably. During the pandemic, the actor spent his savings and then began traveling to Russia for work. Panin acted in films and took part in television projects. This was enough to live without elegance, but with everything you need.

Now the situation has changed. Due to harsh statements about Russia, Panin’s way home is now reserved. The actor lost filming and contracts in Russia and was left without income. A career in Spain does not shine for him either: for this you need to know Spanish well. Therefore, the artist began to think more and more about what he would live on. On the YouTube show “And Graham Came Out” Alexey admitted that he wants to continue to live in Europe, but at the same time earn money in Russia.

“I would like to go to Russia: in winter – to the bathhouse, in summer – to the village, in autumn – for mushrooms. I want to go to my mother’s grave, I want to come to the field to work, but I don’t want to live there! I prefer the sea, Europe. I also like Russia, but not for permanent housing. Therefore, I stay here,” Panin said.

According to the artist, in Europe he is attracted to warm weather and comfort.

“I don’t want to live on earth. In Torrevieja, for example, it also gets dirty, bulls are thrown on the ground, but here they clean, but not in Russia. But with everything, I want to get there calmly, ”emphasized the actor.

Now Alexey is trying to earn a living by teaching. He teaches master classes in theatrical art. The 45-year-old artist does not hide the fact that he earns much less abroad than in Russia. To help his father, his 15-year-old daughter Anna even got a job as a waitress. The girl dreams of becoming an actress, like Panin. But to go to study in Valencia she needs money that the family does not have.

Alexei had another plan: he wanted to try his hand at Hollywood. To do this, he made a tourist visa and went to the United States. Panin tried to find work in the United States, he admitted that he was ready to play “bad Russians” and bandits. But nothing came of this idea either.

In Moscow, Alexei has an apartment that he got after his mother’s death. To improve his financial situation, Panin a few months ago put up a kopeck piece for sale in the Konkovo ​​metropolitan area. But the artist’s apartment is not in demand, he cannot find buyers for it.

“I plan to sell a flat in Moscow and buy a flat for my daughter in Valencia. But it still doesn’t work,” the actor sighs.