HomeLatest News"I wanted to save everything": Natasha Koroleva admitted that she was ready...
Latest News

“I wanted to save everything”: Natasha Koroleva admitted that she was ready to forgive Igor Nikolaev for the betrayal and stay with him 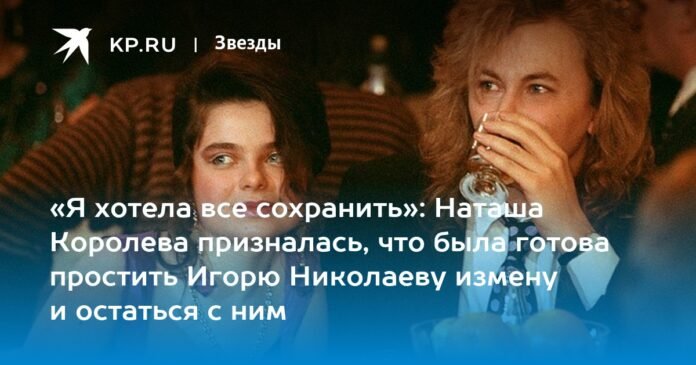 Natasha Koroleva married Igor Nikolaev at the age of 18.

Natasha Koroleva and Igor Nikolaev were one of the most beautiful couples in the Russian show business. Fans adored Delfín and Sirena, so the news of their divorce came as a real shock to everyone. Natalya hid the reason for the break for a long time, but then let it slip – Nikolaev deceived her. More than twenty years have passed since then, but the Queen still remembers that time with pain. The singer admitted that she was willing to forgive her first husband for her mistake, but she was dissuaded from it.

On the “Tonight” program, Natalya said that later, in 2001, she turned to an astrologer in complete despair. And it was he who told her that she and her husband had no future together. So the Queen decided to leave.

“When my first marriage was collapsing, a friend advised me to turn to an astrologer; this was my first experiment. I wanted to keep everything, but they made me a prediction that nothing was possible anymore. And a lot of what they told me happened in the future. When I came out, there were emotions inside me, I didn’t want to believe it, but then life itself clearly showed that everything can be, ”said the hit singer of Yellow Tulips.

Earlier, Natalya mentioned that Igor Nikolaev had an extra affair, and she was very worried about his betrayal. However, she tried to resolve the conflict and gave her husband time to sort out her feelings.

“The betrayal had already occurred, but he made the decision. He was tricked by a difficult one. It was the most difficult year of my life, very difficult, but I am grateful for this year. He made me stronger and took off my rose colored glasses. It would be time to take them off at 27 years old,” the artist said before.

After the divorce, the couple maintained a good relationship.

The marriage of the Queen and Nikolaev lasted almost ten years. During this time, there were many quarrels and grievances between them, but Natalya still considers the years that she spent with Nikolaev to be the most fruitful in terms of creativity, because he wrote her main hits for her.

– He is a wonderful musician and a great friend, but it is very difficult to live with him. Apparently, that’s why our tandem broke up, she admits.

After divorcing Nikolaev, Natalya married a stripper, Sergei Glushko. The couple have been happily married for 19 years, with her son Arkhip turning 20 this year. Ironically, the singer also had to endure betrayal in her marriage to Tarzan. Two years ago, Glushko’s affair with a fan who opened up on a talk show came to light. The queen then preferred to pretend that there was no betrayal and that she was above gossip. Natalya forgave her prodigal husband of hers and gave her a second chance.

Igor Nikolaev has been living with his third wife, Yulia Proskuryakova, for many years. The composer’s chosen one met him at the age of 24. Nikolaev courted Proskuryakova for a long time before they decided to take a serious step and began to live together. True, at first not everything in his family life turned out the way Yulia wanted. The real disappointment for the young master’s wife was that she could not get pregnant for a long time. They did not manage to have a child for ten whole years. But when it happened, Nikolaev’s joy knew no bounds. They are now raising his seven-year-old daughter Veronica.