“I was invited to marry”: Happy Polina Gagarina received a marriage proposal on New Year’s Eve 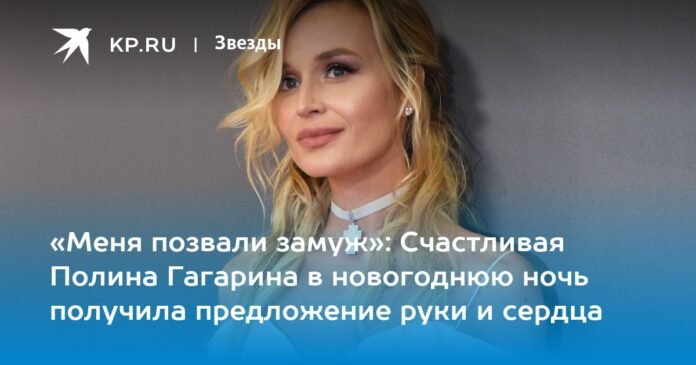 Polina Gagarina divorced her husband, photographer Dmitry Iskhakov, three years ago. Since then, fans have never tired of wondering who the 35-year-old beauty gave her heart to. The singer herself prefers not to advertise her personal life: it seems that the status of an enviable girlfriend suits her quite well. So much so that the artist rejected the marriage proposal she received on New Year’s Eve.

On December 31, Polina, like many of her fellow artists, spent at work. The singer herself gave a festive concert on the stage of the Turandot palace-restaurant, during which one of the spectators proposed to her. In the middle of the performance, an unknown young man came up to the stage and gave the ring to his beloved singer. The boy asked: “Will you marry me?” The artist was completely confused, but he did not take the ring. Polina waved her hand in the hall and replied: “You see, I already have a man, this is my son!”

As it turned out, the potential fiancé of the star turned out to be very young – he was only 16 years old. By the way, Polina’s son Andrey will also be 16 this year. On social networks, the artist admitted that the ring that the young man wanted to give her was very beautiful. But she doesn’t want to get married yet.

“Father Frost and the Snow Maiden, Elsa and Olof came to us. Then came the first concert, finally 2023 came. Then the young man offered me his hand and his heart. I rejected. First, I don’t want to get married. Second, we have an age difference. Although the ring was very beautiful, ”Polina shared on her social media page.

It is possible that one day the singer will really say “yes” to her chosen one. Gagarina meets 50-year-old sound producer Vladimir Chinyaev. Their relationship, which was initially working, gradually turned into a romantic relationship. Chinyaev and Gagarina worked together on Polina’s songs and eventually fell in love with each other. The couple does not publicize their relationship and rarely appears together in public.

According to rumors, it was Chinyaev who made the star divorce Dmitry Iskhakov. The artist has been married to a photographer for six years, from 2014 to 2020. Gagarina has two children: Mia, 6, from Dmitry Iskhakov, and Andrei, 15, from her first marriage to actor Peter Kislov.

Sound producer Vladimir Chinyaev works under the pseudonym ChinKong. In addition to Gagarina, Chinyaev collaborated with many other artists: the Disco Crash group, Emin, Philip Kirkorov, Anzhelika Varum and Leonid Agutin. It is known that before meeting with Gagarina, Vladimir was married, he and his ex-wife are raising two children.