“I will be fat, I don’t care anymore”: Lera Kudryavtseva, who spoke about the divorce, waved her hand at her appearance 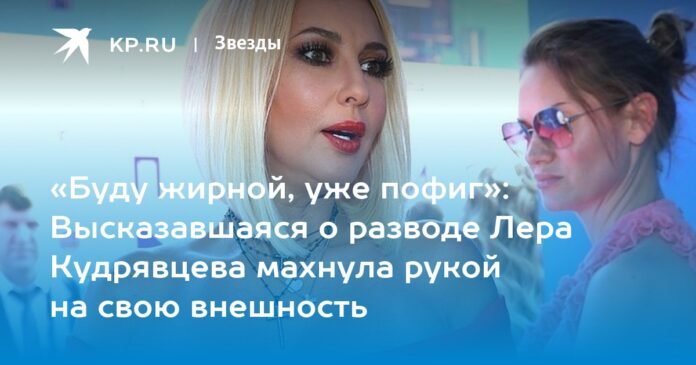 Lera Kudryavtseva celebrates the New Year with her family. On social networks, the television presenter assured that she does the most and does not deny herself anything. Lera herself eats what she wants, not limiting herself to fatty, salty or sweet foods. After the holidays, the whole house of the TV star is replete with delicious food, and she from time to time eats salads from the New Year’s table.

The TV presenter is aware that everything she eats can affect her figure. But he believes that once in a lifetime you can treat yourself.

“Now I ate a herring under a fur coat, Olivier and a Napoleon cake. Burn the shack, burn the barn. At home, two refrigerators are packed with salads and all sorts of things left over from the New Year. You pass, you open, you close, you get scared, you eat. I’ll be fat, right? I don’t care,” Kudryavtseva, 51, wrote on social media.

However, before being well fed, Lera is still a long way off. With a height of 167 centimeters, her weight has been around 50 kilograms for many years. Lera assures that she does not sit on strict diets, she is just very lucky with her metabolism. The secret of your slimness lies in a fast metabolism and an active daily routine. At the same time, Kudryavtseva still tries to avoid harmful products. She doesn’t eat fast food, convenience foods, canned foods, snacks, and doesn’t drink soda.

Kudryavtseva gained excess weight only once in her life – during pregnancy. After giving birth, she quickly shed 18 kilograms. For this, she Lera ate fresh fruits, lean food and tried to walk more.

“I don’t eat anything at work. In fact, as terrible. Although I’m trying. I passed the “genetics”, it was written in black and white that I can’t gluten. And I can’t do without it. I love bread, sweets, pasta so much, ”he said.

Lera has been married to Igor Makarov for almost 10 years. Photo: social networks.

Lera does not like to play sports, although she is married to an athlete. Hockey player Igor Makarov is 16 years younger than the TV personality. On New Year’s Eve, in an interview, Kudryavtseva spoke about her divorce and marriage to a young man. The TV star admitted that in ten years of her family life she had heard a lot of rumors about her. Often, as Kudryavtseva admits, she is criticized by her young spouse.

“I don’t even know how to relate to such statements! Women, you want to live with fat old men, for God’s sake! And I want a young and beautiful! – said the TV presenter.

Lera shared her point of view why men leave the family.

“We are fine. If a man loves his family, his wife, he will never go anywhere. And if love has passed, then no one will keep it. A man is not a dog! Lera pointed.