HomeLatest News"I work on vacation!": Stas Piekha - about the results of the...
Latest News

“I work on vacation!”: Stas Piekha – about the results of the year, the health of the grandmother and the studies of the son 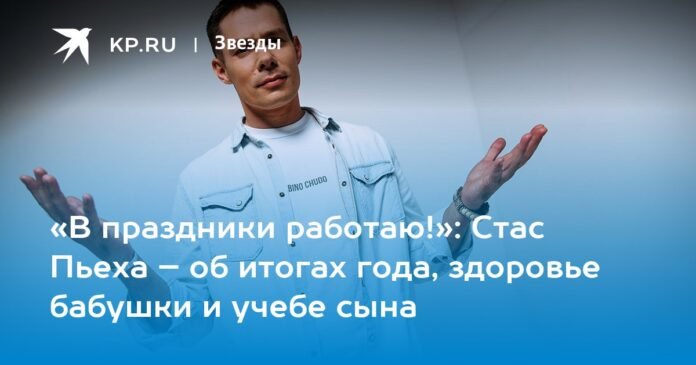 Stas Piekha is not only a musician, but also the owner of a drug treatment clinic, he is also engaged in the prevention of drug addiction. Photo: Alexander Zayats

Stas Piekha traditionally works on New Year’s Eve. And viewers will see the artist in the “Blue New Year’s Light” on the channel “Russia”. At the beginning of January, Stas Piekha has no holidays, but concerts. The day before we spoke with the artist about the results of the year and her family.

– A difficult year is over. What did you manage to do from the plan, what are you carrying over to next year?

– I did not think about anything this year, because the weather is such that it is useless to think. I just lived by the principle of “do the action and do not wait for the result.” Meanwhile, there are breakthrough results: both in the musical field and in the field of narcology (the artist has a drug treatment clinic, he also works in the prevention of drug addiction-ed.). Surprisingly, he accomplished more than he had planned. And what I don’t have, I still can.

– This December you received the “Golden Gramophone” for the song “Sin Ti” after several years of hiatus. Does this mean that business is no longer in the first place, musical life is moving on?

“Music has always come first. It so happened that this song was liked by the audience of “Russian Radio” and we received a statuette “Gramophone”. But this does not mean that something is changing in my life. He just says maybe we can get another gramophone. That is all.

Stas with his mother, grandmother and sister Erika.

– You released a patriotic song in a duet with Nikolai Noskov “Do not kneel.” What do you mean with this song?

– Not a duet, but a quartet – with Nikolai Noskov, with IVAN and Igor Romanov. This song is about universal concepts, about principles (masculine and feminine), about some right things. Rather, such songs are called social. In general, I think that any good song in Russian evokes love for one’s country, for the Russian language, and that our song is also partly patriotic.

– But the song “White Snow” is romantic and melodic, for those who are waiting for their loved ones at home. Is it important to you to have someone waiting for you at home?

– I am pleased that they are waiting for me at home, but this is not necessary… It would probably be more pleasant for me to go somewhere together.

Stas Piekha with his son Petya. The boy is doing well at school, he loves to draw.

– What gifts will your son Petya ask Santa Claus for the holiday, and which of these wishes will dad fulfill?

– I don’t know what Petya asks Santa Claus, because dad is not Santa Claus, I don’t have a beard. I think that her mother Natasha will give me all the wishes for the New Year and I will try to fulfill them.

– How is Petya – new hobbies, circles?

– Kruzhkov, thank God, none were found on the body (Laughs). And Petya is constantly busy: she goes to school and to circles, she manages to do everything. At school they say that Petya is one of the best in academic performance, that she does everything faster than others. Capital new has not yet appeared, we’ll see.

Stas Piekha in the first minutes of 2023, in the New Year’s Blue Light. Photo: channel “Russia”

– Artists usually work for the new year. How and when will you be able to celebrate the New Year with your family? There were a lot of rumors last year about Edita Stanislavovna: how is she? Will you arrive in St. Petersburg in January?

– Yes, we haven’t been able to celebrate the New Year together for many years, usually we all got together on Edita’s birthday (July 31 – editor’s note). This year I will spend the holidays with my family and loved ones, and at work. It’s very traditional for me to work on New Year’s Eve. I do not understand why it is necessary to celebrate the New Year, if you do not particularly feel the holiday. I will work well. And Edita, of course, I want to see. She now feels better and happier: she was committed to health. I would like to support her, prepare her for the positive.

The duel happened in the family of Stas Piekha.

What was Stas Piekha silent after beating his son?