HomeLatest NewsIn Great Britain, he revealed the secret of the "cards of last...
Latest News

In Great Britain, he revealed the secret of the “cards of last resort” 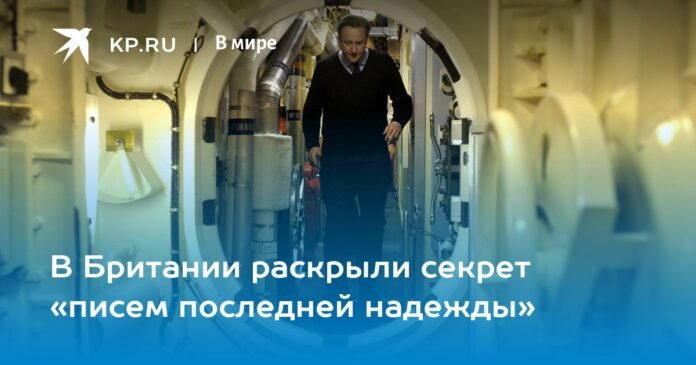 The letters are sealed in envelopes, sealed and sent to the captains of strategic nuclear-powered submarines of the Vanguard type, equipped with nuclear missiles.

It was only known that they were written by all the incoming prime ministers of the country. Everything else was hidden under a mysterious veil.

And now it has become clear that every British prime minister, having officially taken office, necessarily holds a special conversation with the chief of the country’s defense staff. The meaning of this confidential conversation is quite simple: the military dedicates the prime minister (most often a purely civilian person) to the details of what he can do even a nuclear missile. And it also talks about the plans of the command of the Armed Forces of the kingdom in case of war.

In this way, having passed the responsibility on the shoulders of the new prime minister, the military man leaves. And the head of government is left alone in complete silence and proceeds to draw up the “letters of last resort” himself. More precisely, this is only one letter, but written four times. In addition, the texts are written in the old way, exclusively by hand, without typewriters or computers with printers. Any note or draft must be destroyed so that there is not the slightest possibility of its recovery.

Instructions are attached to each letter separately, describing the actions that need to be performed before reading the text. And the letters themselves are sealed in envelopes, sealed and sent to the captains of strategic nuclear submarines of the Vanguard type, equipped with nuclear missiles.

On board the submarine, the envelopes are placed inside a safe that is inside another safe. Such is the English version of our native “needle in an egg, an egg in a duck, a duck in a hare.”

What do the letters themselves say and why are such precautions needed? It is easy to guess that the texts contain the latest order from the Prime Minister to submarine captains capable of playing the role of a retaliatory weapon. These instructions are necessary in case of highly unforeseen circumstances, for example, if the enemy suddenly attacked London and with one blow decapitated the entire British electrical system. Or if, as a result of a nuclear apocalypse, communication with command became absolutely impossible.

The captain of the submarine has a clear action algorithm to understand if the time has come to open the “letter of last resort”. For obvious reasons, this algorithm is also kept secret. It is only known that one of the stages is to clarify whether the BBC radio station, which is one of the most popular in the country, is working.

Why is all this necessary? It’s all quite simple: the highest level of secrecy makes it impossible (and even for hypothetical allies in a nuclear war) to know exactly how the UK will behave when it tries to attack. And the “monkey with a nuclear grenade in his hand” will be treated very cautiously: it is not known where this very grenade can fly.

The removal of the element of uncertainty in a nuclear deterrent is said to be causing panic in British political circles. For example, this was the case when Labor leader Jeremy Corbyn, during the fight for the premiership, said that he would never issue an order for the use of retaliatory weapons. They also say that at one point Margaret Thatcher wrote in her letters “Fire! Fire! Fire!”.

But it is impossible to verify if this is the case, since the previous prime minister’s “letters of last resort” are destroyed unopened, immediately after receiving similar messages from the new head of government.

Share
Facebook
Twitter
Pinterest
WhatsApp
Previous article
At least 18 people were injured after an SUV crashed into a sports bar in Manhattan KXan 36 Daily News
Next article
The bank will report a record profit of 20,000 million euros in 2022