HomeLatest NewsIn Los Angeles they sacrificed the most famous predator in Hollywood, who...
Latest News

In Los Angeles they sacrificed the most famous predator in Hollywood, who was called the “Brad Pitt among lions.” 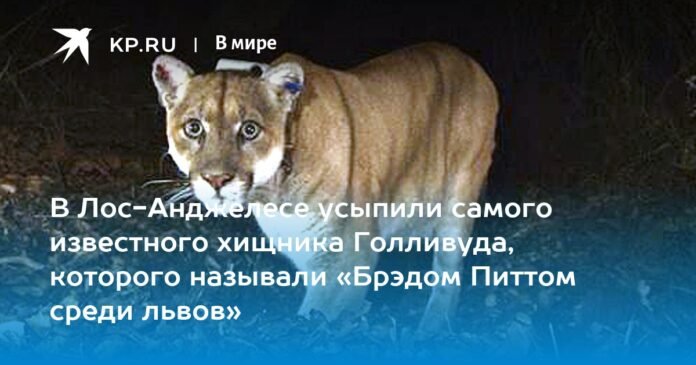 Sunny Los Angeles, where vacations and eternal summer always reign, plunged into mourning. The city is mourning a cougar named P-22 who has lived in the Hollywood Hills for more than a decade and has become the face of an international campaign to save endangered cougars in Southern California, he writes. Los Angeles Times.

In mid-December, experts from the National Park Service and the State Department of Wildlife trapped and drugged a P-22 with tranquilizers and sleeping pills in the backyard of a private home for a medical examination. This was triggered by the atypical behavior of a wild cat. Instead of hunting deer and coyotes, the puma began to attack small dogs: he killed a Chihuahua and mutilated two more dogs, and this is only in a month. And he also organized a manhunt for a local resident who was walking his dog. True, there were no victims.

The verdict of the doctors was disappointing. The animal had a lot of chronic senile diseases. He lost a quarter of his weight, saving only 40 kg. But most of all, the cougar was in pain from injuries sustained as a result of a recent collision with a car. Veterinarians found the animal had a fractured skull, an injury to its right eye, a ruptured diaphragm and internal organ damage.

According to what local authorities said at a press conference, shortly before the special operation to catch the P-22 by scientists, an anonymous call was received. The caller said an unknown driver had struck a cougar on the highway not far from its habitat: Griffith Park. The location was confirmed by a radio collar mounted on the animal.

Upon completion of the examination, the scientists agreed that the P-22 was not healthy enough to be released into the wild. Although there were those who considered it correct to return the puma to the park. As a result, wildlife officials decided to euthanize the animal so it wouldn’t suffer.

– It was a difficult but correct decision. This animal did not deserve to suffer, – said the executive director of the National Wildlife Federation in California, Beth Pratt.

The world first learned about the P-22 in 2012, when a motion-sensor camera captured its tenderloin and curved tail in Griffith Park. Scientists were surprised that a cougar born in Santa Monica managed to overcome a serious and dangerous path through the Hollywood Hills and the busy highways 405 and 101. Soon National Geographic photographer Steve Winter went looking for him. After many hours of waiting, he managed to capture a crouched P-22 in front of the famous Hollywood sign.

The wild cat quickly gained fame. For his thoroughbred appearance, he was compared to Brad Pitt, and the paparazzi were after him no less than venerable movie stars. And Los Angeles residents, instead of demanding to be protected from the predator, unexpectedly stood up for him. Puma was allowed to live in the most famous film city. P-22 became an urban legend: socks and car stickers were issued with his image, tattoos were made, and by order of the city council a holiday was established in his honor.

Experts believed that the cougar would stay in Los Angeles for a while and go further afield in search of a mate. However, P-22 chose Hollywood and the single life, hunted deer and raccoons in Griffith Park, sometimes behaved outrageously: in 2015 he went to the local zoo and harassed a koala. When he wanted to attract attention, he at night flashed on the CCTV cameras of local residents. But over the years, the P-22 began to visit and stop more and more in the suburbs of Los Angeles.

The life of the P-22 in the big city made experts reflect on the fate of the pumas in California. The main obstacle to the restoration of their population has become circumferential routes, it is they who separate the animals that were born in the Santa Monica Mountains from most of their relatives living in the north. This issue has drawn the attention of many international experts and charitable foundations, including the Leonardo DiCaprio Foundation. This year, the state decided to start building “wild bridges” that would allow predators to safely cross busy highways.