In Paris, eco-activists poured paint over the doors of the French prime minister’s residence. 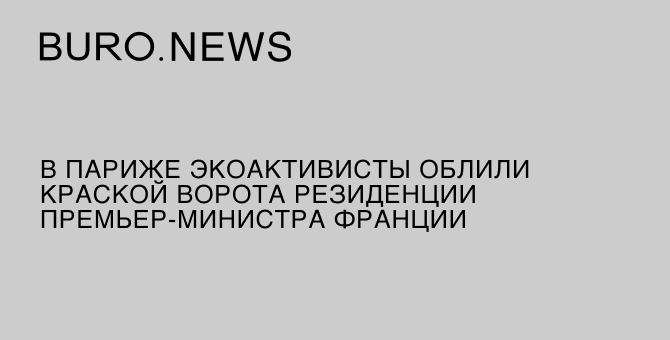 In Paris, eco-activists from the Last Renewal movement poured orange paint over the doors of the French Prime Minister’s residence. They wanted to draw attention to the government’s inaction on climate issues.

Environmental activists sprayed paint with fire extinguishers. Two people, a 22-year-old man and a 20-year-old girl, were immediately detained by the police. They were arrested and are accused of damaging property intended for public needs and disrespecting the authorities.

“As long as the government continues its criminal inaction, we will continue to use all non-violent means at our disposal to ensure the cries of the uprising are heard,” the environmental activists said in a statement.

They chose the residence of the French prime minister to point to the “culprit” of the climate crisis.

Previously, activists from the Stop Fossil Fuel Subsidies movement joined protests at famous museums around the world. They went to the National Gallery of Australia in central Canberra and stuck to Andy Warhol’s famous “Campbell’s Soup Cans”.

Share
Facebook
Twitter
Pinterest
WhatsApp
Previous article
The CNMC requests more help for the transport of goods by train for the works
Next article
What language do the priests of the Russian Orthodox Church serve in Uganda?