HomeLatest NewsIn Paris, Kurds, outraged by the murder of three of their activists,...
Latest News

In Paris, Kurds, outraged by the murder of three of their activists, staged a battle with police KXan 36 Daily News 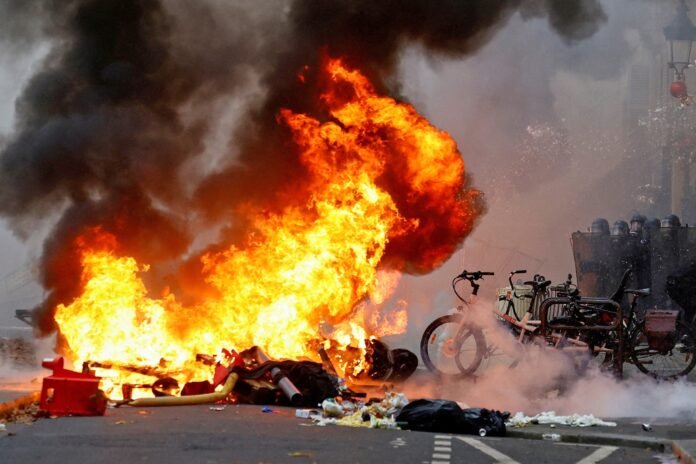 It was there that the Democratic Council of the Kurds of France (DSKF) decided to hold a demonstration in memory of its three representatives, assassinated the day before in eastern Paris. The action, conceived as a peaceful protest against arbitrariness, and in which several thousand people participated, quickly turned into clashes with the police. The trigger for this was the incident with the car, which was trying to make its way through the crowd of protesters.

According to one of the FSKF leaders, a Turkish flag was unfurled from the car window, which the already outraged participants in the action considered a deliberate provocation, given the more than complicated relations between the Kurds and Ankara. In fact, later, presumably, the investigation will clarify what happened, but the fact remains: the Republic Square and its surroundings have turned into a real battlefield.

Protesters began overturning cars and setting some on fire. They also began to break shop windows, bus stops, and other street furniture. As usual, the trash cans were turned on. Enraged people began tearing up the cobblestones from the pavement and throwing them at the law enforcement officers. Bottles, firecrackers, bits of asphalt and other objects that came to hand flew in his direction. Police responded with tear gas and stun grenades.

The battle lasted for about an hour until the organizers of the action decided to stop it. As a result, the military suffered the most: 31 law enforcement officers with injuries of varying severity were sent to the hospital, but only one of the protesters was injured. It is true that eleven Kurds were arrested. Only on the night of Christmas Eve was the order put into action. Meanwhile, details of the attack on the Ahmet-Kaya Kurdish center, which is located on Engen street in the X district of the capital, are becoming known.

The name of the perpetrator has been established. It turned out to be William Male, 69. French by birth, he worked all his life until his retirement as a train driver at the National Railway Company (SNCF). The massacre, which killed the leader of the Kurdish Women’s Movement in France, Emin Kara, two activists and also injured three other people, was planned by the attacker in advance and, he later admitted, for “racist reasons”. He would shoot people with an American Colt .45 caliber pistol, which, according to him, “was taken by an acquaintance”. It turns out that the attacker was in a shooting club and had a collection of weapons, which seems more than strange. The fact is that Monsieur Malet has already been convicted twice and has gone to prison. In particular, for attacking a migrant camp on the outskirts of Paris with a saber in 2021. That is why the police knew of his hatred for “coming in large numbers” and his addiction to lethal weapons, which, according to the laws premises, is not compatible with its possession or with belonging to a shooting club.

The offender shot people with a 45-caliber American Colt pistol, which “a friend got”

However, the assailant, who had served a year behind bars, was released on December 12, awaiting trial in one of the proceedings against him, which he took advantage of armed with a Colt. Here it is believed that the criminal acted alone and had no contact with the ultra-radicals. He also did not pass the lists of the Ministry of the Interior, where socially dangerous people are registered. For now, the racist attacker, slightly injured during his arrest by the police, has been transferred to the psychiatric medical unit of the Paris prefecture, where he will undergo the corresponding examination.