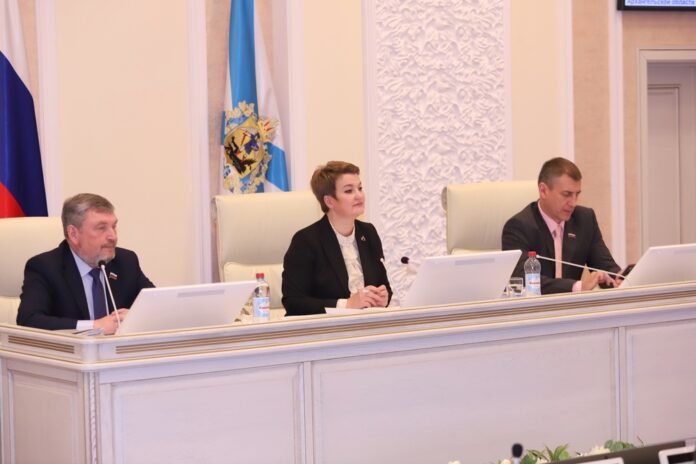 – Given the serious work with the government of the Russian Federation, due to the fact that almost a third of our budget is federal subsidies, we were able to receive additional funds for the implementation of the most important programs: construction of roads, relocation of emergency housing, modernization of the health system, major repairs of schools and cultural institutions, – comments on the decision of the session, the president of the regional Assembly of deputies Ekaterina Prokopyeva. – When forming the new budget, we kept the priorities: funds are provided for the fulfillment of all social obligations, the indexation of social support measures and an increase in the salaries of public sector employees.

This time, while working on the budget bill, 32 amendments were received for the second reading: they redistribute spending for certain items, and also introduce co-financing of additional spending obligations from the regional treasury. Thus, the Arkhangelsk hinterland will receive a significant part of the funds next year – funding for the program for the integrated development of rural areas will increase by 280 million rubles. The list includes the reconstruction of sewage treatment facilities in the village of Ilyinsko-Podomskoye, Vilegodsky district, the repair of the House of Culture and the construction of sewage infrastructure in the village of Talagi, Primorsky district, and the construction of a sports complex in Nyandoma.

The health sector is also a priority: financing of health care from federal funds will be increased by 111.5 million rubles in 2023. 60 million will be allocated for the design and construction of two feldsher obstetric stations, one of one of which is located in the village of Pezhma, Velsky district, and the second in the village of Nenoksa near Severodvinsk. Overall, investments in the health sector have nearly halved next year. It is planned to allocate 1.1 billion rubles for the primary care modernization program in 2023, including 667 million rubles for the construction of facilities, almost 485 million rubles for repairs and equipment of medical institutions. The necessary co-financing is also provided from the regional budget.

A significant part of the additional funds – about 100 million rubles – will go to providing housing for orphans: this money will shorten the queue for providing apartments to the most vulnerable category of youth in the region. In addition, an additional 56.2 million will be allocated to the education sector to continue with the reform of schools.

30 million rubles were allocated for the construction of the long-awaited cultural and entertainment center in Pinega, which should harmoniously fit into the historic Volodinsky quarter of the village. In addition, additional funds from the federal and regional budgets will be invested in the modernization of theaters, repairs of cultural centers in the Arkhangelsk hinterland, equipment of art schools and cultural institutions with musical instruments and equipment.

Meanwhile, the budget will allocate an additional 448 million rubles for the removal of five unauthorized landfills formed on the islands of the city of Arkhangelsk and in the Nyandoma Territory. In addition, another 520 million, which will go to the creation of three complexes for the processing, disposal and disposal of MSW in the Kholmogory, Nyandoma and Kotlas districts.

According to Sergey Moiseev, Chairman of the Committee on Budgetary, Financial and Tax Policy of the Regional Assembly, next year’s budget turned out to be quite solid and, according to its main characteristics, socially oriented.

– An amendment of a group of deputies redistributed 135 million rubles. Including 55 million rubles were allocated for the purchase of transport for creative teams, which is especially important for rural institutions. Ten million rubles are provided to ensure that residents of remote areas can organize trips to receive quality medical care, as well as trips of “narrow” specialists to remote areas.

A report on the execution of the regional budget for the nine months of 2022 was also announced at the session. The figures are encouraging: the regional treasury received 101 billion rubles in three quarters, ten percent more than planned. If we compare these revenues with the same period in 2021, the profit increased by 20.381 billion rubles, that is, by 25 percent.

The region’s own revenues (tax and non-tax payments) amounted to 61 percent, and the Arkhangelsk region met the plan from January to September by 114 percent. Eight thousand 74 million rubles were added to the budget above the established indicators, mainly due to corporate income tax and personal income tax. The region received such an effect due to the activity of businesses, including individual entrepreneurs.

The same optimism extends to the 2023 budget. Today, business activity in the region does not slow down, – says the deputy chairman of the regional Assembly committee on budgetary, financial and fiscal policy, Nadezhda Vinogradova. – The exception is the timber industry, but there are objective reasons in it – external conditions, on which sales markets depend. Today, we are building new supply chains, and we are very hopeful that with the support of regional and federal authorities, in 2023 and 2024, budget revenues will begin to grow due to the growth of the timber industry.

Meanwhile, 38.567 million rubles were free income to the regional budget. Most of them are federal money, as well as funds from the Housing and Utilities Fund, which were allocated to the Arkhangelsk Region for the resettlement of northerners from emergency housing.

The expenses of the regional treasury for the nine months of 2022 amounted to 95 thousand 557 million rubles. In addition, the main part of the “general budget cake” was received by the social sphere: education, culture, health, physical culture and sports.

The deputies insisted on the allocation of 20 million rubles for the repair of monuments to the heroes of the Great Patriotic War and participants in local conflicts. In addition, the parliamentarians supported popular projects for budget initiatives and territorial public self-governments in the region:

– A total of 72 million rubles will be allocated for initiative budget projects. That is, municipalities have great opportunities to allocate funds for the most important projects that they will choose together with residents, – said Ekaterina Prokopyeva.

In 2022, 264 million rubles were allocated to support small and medium-sized businesses in Pomorie. Next year, expenses will grow 1.7 times – up to 460 million. Financing of support activities for export-oriented SMEs will increase and amount to almost 29 million rubles. Viktor Ikonnikov, Minister of Economic Development, Industry and Science of the Arkhangelsk Region, spoke about this within the government hour.

After the introduction of anti-Russian sanctions in the region, additional measures were taken to support business: the Pomorye authorities reduced the amount of rent under lease agreements for real estate owned by the region, established benefits for tenants of agricultural cooperatives and committed tenants. in socially significant activities. In addition, minimum rates were introduced under the simplified tax system for 21 industries.

“Despite the current difficulties, a significant increase in funds is planned for many items in the 2023 budget,” Alexander Frolov, head of the parliamentary committee on economy, entrepreneurship and investment activities, said after the government hour. – But you should not relax, the year will be difficult, so you need to take advantage of all the opportunities so that the economy and business can maintain and improve their positions.

To the museum – free

This right was granted to all preschool children in Pomorie.

Children under the age of seven will now be able to visit the Pomorie State Museums for free (previously only children under the age of five had this right). Amendments to the regional law “On Museums and Museum Affairs in the Arkhangelsk Region” were approved on first reading at a session of the Pomorye Parliament. “By making changes, we are expanding support for families with children,” said Olga Vitkova, head of AOSD’s Committee for Cultural Policy, Education and Science.

Photo: Press Service of the Arkhangelsk Regional Assembly of Deputies