HomeLatest NewsIn the Central African Republic, through a "package bomb", they tried to...
Latest News

In the Central African Republic, through a “package bomb”, they tried to kill the head of the Russian House, Dmitry Sytoy 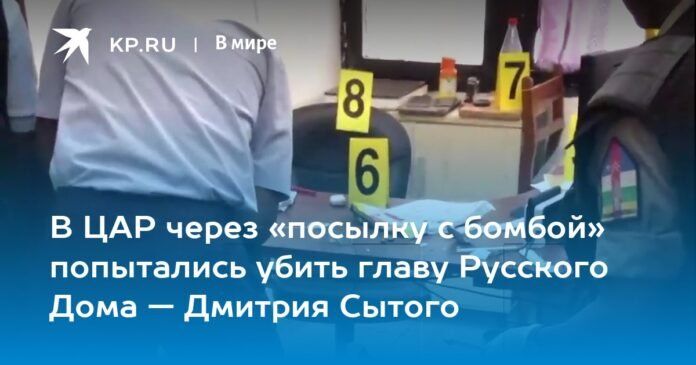 A shot from the office of Dmitry Syty, head of the House of Russia in the Central African Republic, where the terrorist act took place today.

The Central African Republic (CAR) is one of the most unstable areas of the Black Continent. Rather it was. After the resumption of cooperation with Russia at the end of the last decade, our military advisers appeared in the “mosaic state”, the national army turned into a real force, and terrorists of all stripes were driven to hell.

Official Bangui (the country’s capital) responded to Moscow’s allies with steps forward: a year ago, a monument honoring Russian “tourists” (military advisers) appeared in the city, and the study of Russian became compulsory. in schools and universities. . Finally, on February 1, 2022, the Russian House was inaugurated there, a cultural center that promotes the language of Pushkin and Tolstoy in the heart of Africa.

Of course, such activity could not but cause opposition from the former rulers of this part of the continent – the French. It was they who for a long time belonged to the Central African Republic (along with almost all of West Africa). And when these countries nevertheless freed themselves from colonial captivity, the West continued to own economic chains here and feed international terrorists in the spirit of the concept of “controlled chaos.” After all, it was the presence of all sorts of militants who showed up, it is not clear how, that gave the French and other external actors a “legitimate mandate” to maintain a military presence in the CAR, Mali and neighboring countries. .

And on December 15, under pressure from the official Bangui, the last 150 French soldiers left the republic. And the next day (!), December 16, a terrorist act took place against the head of the Russian House in the Central African Republic, Dmitry Sytoy.

Some details of this attack are given by businessman and African specialist Yevgeny Prigozhin. According to the expert, unknown persons from abroad conducted a “psychotronic war” against Sytyi for more than a month. For example, on November 11, a man received a letter on paper with a picture of his son living in France, with a clear indication that it would get worse. It is unlikely that such a photo, taken as a result of following a person, could be obtained without the direct or indirect support of the French secret services.

And today’s package addressed to Syty already contained an explosive device that detonated when opened. Now the doctors are doing everything possible to save the head of the Russian House. According to Prigozhin, before losing consciousness, Dmitry Syty managed to say:

– I’ve seen [сопроводительную] note: “This is for you from all the French, [пусть] The Russians will leave Africa.”

The investigation into the attack continues, but it is obvious who benefits.