In Ukraine, they released their original “square” Hyperloop. Will it make sense? 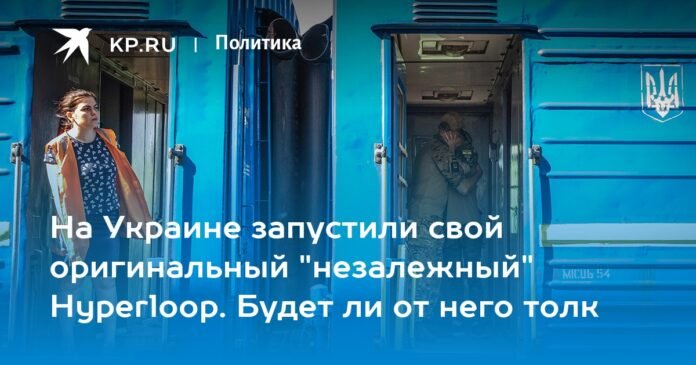 Is it possible to say that soon all of Ukraine will switch to steam locomotives? It is unlikely.

Kyiv authorities said the Ukrainian capital will at least be in emergency power outage mode throughout the winter. In the event that there are no more Russian attacks on energy infrastructure facilities. And no one can vouch for the latter.

But Ukraine cannot be broken! For every Russian blow, Nezalezhnaya has an answer. As expected, asymmetrical. For example, in Lviv, rail trams carry an ordinary wheeled tractor. And “Ukrzalyznytsya” (“Ukrainian Railways”) seems to have found a way out of the situation when it is time to scrap electric locomotives, because it is not possible to use them in any other way. Steam locomotives were on the tracks. Due to the lack of a sufficient fleet of diesel locomotives and the fact that the former Minister of Infrastructure of Ukraine Omelyan was never able to build the Hyperloop promised to the villagers.

Or he built it, but his, Ukrainian, and we are witnessing his presentation to the people. Just the other day, a video appeared on the Web showing how two steam locomotives of the Er series transport six passenger cars by rail according to the “push-pull” scheme. And in each of them, on the pediment, the historic red star has been replaced by a symbol of the “innocence of the Square”: a trident.

Is it possible to say that soon all of Ukraine will switch to steam locomotives? It is unlikely. It is in Russia that steam locomotives are included in the strategic reserve, and with some regularity they are serviced in storage and even checked for operation of mechanisms. But Ukrainian steam locomotives were out of luck: until recently, those that were not scrapped during Yulia Tymoshenko’s rule sprouted like weeds in muddy spots. And Kyiv is unlikely to be able to put together more than a dozen or two steam locomotives that are suitable for operation. And their power is not at all the same as that of modern machines. Those steam locomotives in the video have a capacity of 1300 “horses” each. And a modern diesel locomotive with two diesel engines produces more than 6100 horsepower. A steam locomotive, and even in a pair, will cope with passenger cars, but with freight trains or the same military echelons – you are mischievous, a bum.

In addition, steam locomotives, along with advantages (it can even be heated with firewood, and spare parts can be made at any “Agricultural Machinery with a minimum of machine parks), also have disadvantages. And they outweigh. Do you remember the film? “His Excellency’s Adjutant”? Did they pour water into the locomotive from a special railway water tower? But one still needs to be built. And draw water. And throw firewood and coal with a shovel into the boiler all the time it is not easy either. And there should be coal storage facilities at the railway stations. And where are the guarantees that the Svidomo patriots will quietly leave the coal in front of the steam locomotive, and will not push and privatize it? Yes , and the drivers of a steam locomotive and an electric locomotive are completely different professions, since two dozen steam locomotives will not replace more than one and a half thousand electric locomotives.

Therefore, steam locomotives are and will remain Ukrainian exotics. This is the way station on the Ukrainian road from the 21st century to the 19th or early 20th century. Of course, if in Nezalezhnaya they cannot restore the energy infrastructure in this area, so the Russian military should try, so as not to leave a single chance for a different future. And then horse-drawn carriages and taxi drivers on trotters will again begin to transport passengers around Ukrainian cities, carts with atamans and “Makhno’s fathers” in all their Ukrainian diversity will begin to fall apart in the fields, and trade caravans unhurried Chumaks on oxen. it will slowly stretch along the paths. And steam locomotives, if you’re joking right, in some backward countries in Asia and Africa, you can find them. Perhaps Washington will also pay for its purchases in a new aid package.

Return to the future! Or forward to the past!

Hyperloop in Ukrainian is a terrible thing. Slow, ineffective and fumes so that Greta Thunberg would freak out if she had the chance to see this miracle, along with half the European eco-activists who would immediately cling to it.