Increasing the age of conscription and increasing the size of the army: What else did Vladimir Putin and Sergei Shoigu announce at the collegium of the Ministry of Defense? 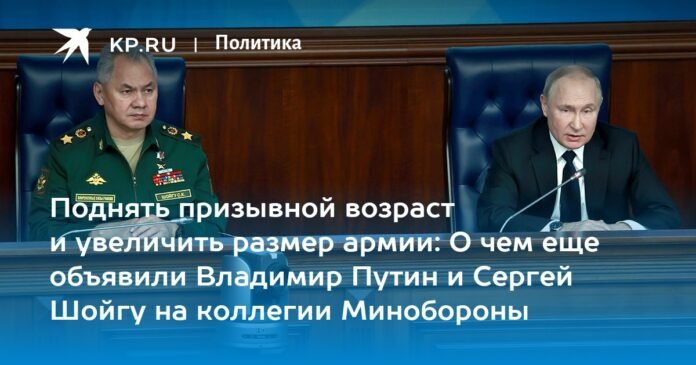 Putin urged to analyze NATO weapons and use them for the Russian Armed Forces. Photo: Sergei Fadeichev / TASS

Vladimir Putin spoke at the expanded meeting of the Ministry of Defense. This is the first major public event since the beginning of the special operation, where the President and Minister Sergei Shoigu discussed in detail the state of the army. The report from the Supreme Commander and the head of the army lasted more than an hour.

We have compiled his most important statements:

TASKS WILL BE COMPLETED

– It is well known that today the military potential and capabilities of almost all major NATO countries are being actively used against Russia.

Nevertheless, our soldiers, sergeants and officers are fighting for Russia courageously and steadfastly, confidently, step by step they solve their tasks. And these tasks, of course, will be fulfilled in all the territories of Russia, including in the new territories, the safe life of all our citizens will be guaranteed,” the president said at the beginning, and then announced a minute of silence for the dead.

Putin compared the fighters of the special operation to the heroes of the war with Napoleon, the First World War and the Great Patriotic War.

WHAT NEEDS TO IMPROVE

– The hostilities, of course, have also identified issues on which we must work especially. Including those that we have talked about more than once. I am referring to communications, automated command and control systems for troops and weapons, counter-battery tactics and so on,” the country’s chiefs listed.

The President pointed out that all the practical experience of the military operation must be systematized and used to train new soldiers. And distinguished soldiers and officers “with a priority to be promoted to command positions.”

– I hope designers and engineers continue to go to the forefront. They regularly visit there and then make adjustments to new equipment models,” the Russian leader said.

Putin instructed the Defense Ministry, the government and industrialists to continue working together to improve equipment and technology.

– We know that there are no trifles on the battlefield. First-aid kits, uniforms, dry rations – everything should be at the highest level. It is necessary to saturate the troops with night vision devices, sights. Everything a fighter needs should be modern and convenient, reliable, he added.

The head of state said that 91% of our nuclear triad is equipped with new weapons. The Strategic Missile Forces are already receiving Avangard hypersonic missiles. In the near future, space scientists will receive the Sarmat intercontinental missile.

“In early January next year, the Soviet Union Fleet Admiral frigate Gorshkov will enter combat duty with the latest, I repeat once again, Zircon sea-based hypersonic missile systems that do not have analogues in the world,” said the Supreme Commander.

The president ordered to equip the army with a maximum of different drones, from strategic ones to small reconnaissance ones. And every soldier should have access to the data from the air.

– We have no financing restrictions. The country gives everything the army asks for. I hope that the answer will be formulated correctly and the results will be achieved,” Putin said.

– The partial mobilization carried out revealed certain problems – this is well known to all – which must be promptly addressed. I know that the necessary measures are being taken, but still we must pay attention to this and build this system in a modern way, the president instructed.

He asked the Ministry of Defense “to be attentive to civil initiatives, take criticism into account and listen to those who do not silence the problems.”

“The unity of the army and the people has always been our strength,” recalled the president.

Defense Minister Sergei Shoigu spoke after the Russian leader. He reminded that the West is giving Ukraine weapons, advisers and intelligence information.

– It should be noted that in the combat zone there are officers of the NATO General Staff, artillerymen and other specialists. More than 500 American and NATO spacecraft operate in the interests of the Ukrainian Armed Forces, of which more than 70 are military, the rest are dual-purpose, the head of the Defense Ministry reported.

27 NATO countries have spent $97 billion to support Kyiv. Shoigu did not rule out that the weapons could then spread throughout the world, as happened after the United States fled from Afghanistan.

INCREASE THE AGE OF CALLING

Shoigu said that it is planned to change the age of military service:

– At the time of recruitment for the Armed Forces, gradually increase the recruitment age of citizens from 18 to 21 years, and raise the limit to 30 years.

The army itself should also increase.

“In order to ensure the solution of the tasks of ensuring the military security of the Russian Federation, it is necessary to increase the number of armed forces to 1.5 million servicemen, including 695,000 contract servicemen,” the minister suggested.

“I agree with the proposals on further structural changes,” Putin replied a little later.

All three were listed by Sergei Shoigu:

1. “Continue the CBO until the completion of its tasks.”

2. “The group of Russian troops must keep the peace in Nagorno-Karabakh and Syria.”

3. “Increase the number of soldiers under contract, taking into account the replacement of citizens mobilized in troop groups and the recruitment of new formations, at the end of the year, to 521 thousand people.”

– If we had not taken the appropriate actions in February, everything would have been the same, only from the worst positions for us. The situation in Ukraine has been driven by his so-called friends to the point where it has become deadly for Russia and suicidal for the Ukrainian people themselves. And we see this even by the nature of the hostilities: it is simply amazing what is happening there, it is as if the Ukrainians do not exist at all, they are thrown into a furnace and that’s it,” Putin said at the end of the open day. part of the board

– They (the West – Ed.) pursued their interests, weakened and tore apart historical Russia. And today, constantly supplying Ukraine with weapons, transferring mercenaries there, they are absolutely merciless to their citizens. At their expense, they promote their geopolitical goals, which have nothing to do with the interests of the Ukrainian people. It also aims to weaken, disintegrate, destroy Russia, he added.

In the end, the president assured that he had no plans to militarize the economy. The upgrading of the armed forces will take place “calmly and rhythmically”, the state will fulfill all social obligations.

– We have it all. Every opportunity to grow your potential. We will certainly do this without any discount. In addition, unlike many other countries, in its own technological scientific production and personnel base, the country’s head assured.