HomeLatest NewsInflation in Russia suddenly slowed down: which products have risen and fallen...
Latest News

Inflation in Russia suddenly slowed down: which products have risen and fallen the most in price in a week 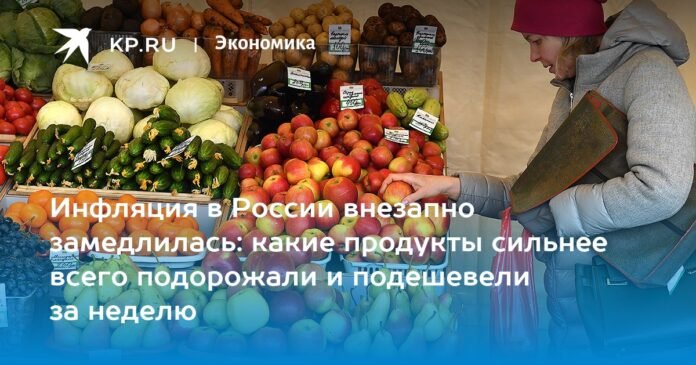 On New Year’s Eve, Rosstat surprised with something positive: according to the latest data, annual inflation in Russia is only 12.35%. Where is the positive here, you ask? And this is where: the fact is that a week ago, annual inflation was 12.65%. It turns out that price growth in Russia has begun to slow down, and this is a very unusual phenomenon for winter.

And for the week, according to the latest Rosstat report, overall prices were up just 0.02%. For this we say thanks to the vegetables and tubers. Rather, a wonderful harvest this year. There is no shortage of domestic vegetables, there is still no need to import many imported foods, and therefore the gifts of nature are very slowly becoming more expensive. According to Rosstat, prices for fruits and vegetables increased by 1.5% during the week (this is really not enough for winter). Cucumbers, carrots and onions were the biggest gainers among fruits and vegetables (for more details, see “Just Numbers”). And cabbage is generally our favorite vegetable this year. Despite the fact that it has risen in price by 1.5% during the week, but since the beginning of the year it has already fallen in price more than twice. And potatoes and beets have dropped in price by a third since the beginning of the year.

But not just potatoes. According to Rosstat, many non-food items have dropped in price over the last week, such as vacuum cleaners, toothpaste, soap, and smartphones. True, not much, on average by a percentage or less.

What to expect next? And here in this question, unfortunately, the positive ends. In just a couple of weeks, the ruble exchange rate fell by almost 20%. This means that prices will rise soon. And this applies not only to smartphones with vacuum cleaners, but also to vegetables. Towards the middle (and even more so towards the end) of winter, stocks of Russian carrots and potatoes will run out and we will be shipping imported goods at a new, higher dollar rate.

What went up the most in a week…

According to Rosstat as of December 21.