Informal in Russian: Vladimir Putin Gathered CIS Leaders in a Museum and Treated to Potato Pancakes with Crab 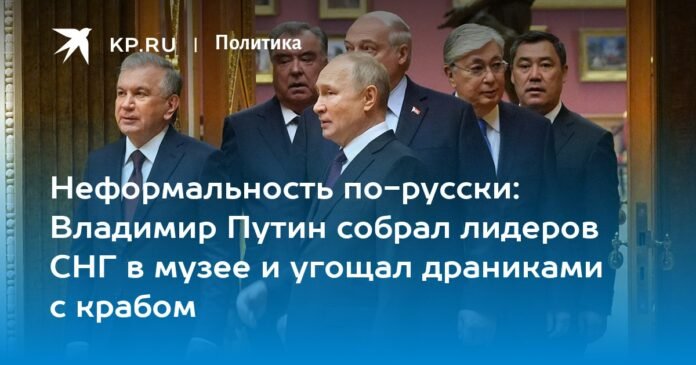 At the end of the year, Vladimir Putin gathered the leaders of the CIS countries in Saint Petersburg for an informal summit. On Monday, December 26, the politicians withdrew to the Yeltsin Presidential Library. On the second day, the heads of state were invited to the Russian Museum. Presidents communicated against the backdrop of portraits of kings and even Christ.

“We agreed that we will celebrate 2023 as the Year of the Russian Language, so it seems to me that meeting today for a working breakfast at the Russian Museum would be very welcome,” Vladimir Vladimirovich said at a morning breakfast with Lukashenka.

The President recognized that “every day life provides a reason to discuss” all the new issues that must be addressed.

A sketch of the painting “The Appearance of Christ to the People” hung over the politicians.

– Thank you for Moscow, and for the cosmonauts, for the center, – I visited there, looked, a very decent time, – and for St. Petersburg, we looked at something, – answered the Belarusian leader.

Literally a few days before the start of the summit, he visited the Cosmonaut Training Center.

– If someone thinks that we only drank tea, then I must say that yesterday, not only at this tea party, but also late at night, returning home, we discussed many issues. Sometimes it takes years for some states: we dot many i’s at night, Lukashenka added.

The Belarusian leader praised the public services of Saint Petersburg.

– I felt sorry for the cleanup – I will go to Minsk, I will make sure that we catch up. You don’t even feel that it’s winter here: the city has been so clean, torn, remembered, ”Batka praised.

Vladimir Putin and Alexander Lukashenko during a meeting at the Russian Museum. Photo: Alexey Danichev/POOL/TASS

Such praise from Lukashenka is worth a lot. The president of the Union Republic is known for his fashion on cleanliness in public places. And the janitors literally lick Minsk – they are punished for litter.

Then the director of the Russian Museum, Vladimir Gusev, gave the politicians a tour. True, Aliyev and Berdimuhamedov missed it.

– A wonderful exhibition of Aivazovsky was in Yerevan from our museum, – he commented when Putin and Pashinyan approached.

Then Vladimir Vladimirovich himself led the guests.

The Russian leader still has ahead of him bilateral meetings with invited politicians. Breakfast with Lukashenka was only the beginning of the program.

It was known what the presidents had for breakfast at the summit:

* Cottage cheese with berries – to heat.

* Three types of porridge to choose from: five cereals, rice porridge with raisins and buckwheat porridge.

* Dranik with crab and poached egg.

* For a drink: mulled wine sorbet with dried cherries.