HomeLatest NewsInstead of going to football with friends, Alexander Lazarev gave all his...
Latest News

Instead of going to football with friends, Alexander Lazarev gave all his free time to his wife and son. 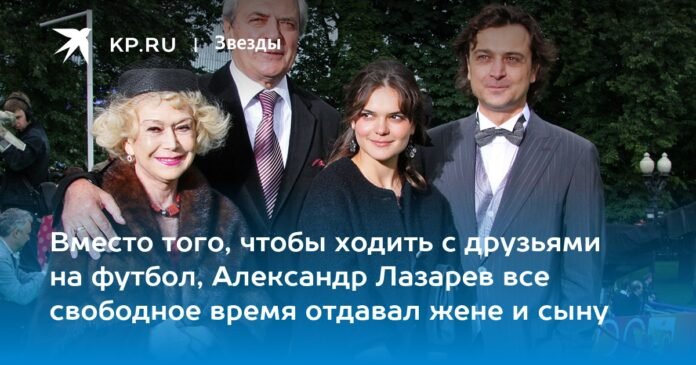 Alexander Lazarev with his wife Svetlana Nemolyaeva, their son Alexander and their granddaughter.

“During the blockade we had lunch every day. They took out empty plates, forks and pretended to eat…”.

Alexander Lazarev (for many years “senior” was added to his last name to distinguish him from his son, also an actor and namesake) was born in early 1938 in Leningrad. His mother was a typist, his father was an artist. Sasha celebrated his fourth birthday at the most catastrophic period in the city’s history, at the height of the blockade. They say that in order to keep warm, in the terrible winter of 1941-42, they had to burn all the books in his father’s library…

A terrible famine began. “How did we survive? We had to die, – the actor later recalled. “But we used to sit down for dinner every day. They set up empty plates, picked up forks, and pretended to eat. Psychologically it was very important.” However, the boy and his parents were lucky: they were able to evacuate to Orenburg. And after the lifting of the blockade, I return to Leningrad.

Then there was a completely ordinary life, in which Waterloo Bridge played a special role, a heartbreaking melodrama with Vivien Leigh and Robert Taylor, which enjoyed great success in the post-war USSR. Sasha Lazarev fell in love with this photo. “Under the impression, I wandered around St. Petersburg, encircled someone in my arms near the Kazan Cathedral, saw off someone at the railway stations. Naturally, all this happened in my imagination. That was the beginning of the beginning.”

This is exactly how Sasha thought of becoming an actor. And then everything happened as if by itself. In another interview, Alexander Sergeevich recalled: “My comrade said:“ Sasha, are you going to be an artist? Some kind of paper hangs on Nevsky Prospekt: ​​”Studio school announces student enrollment.”

It turned out that a commission from the Moscow Art Theater School came to Leningrad from Moscow to look for talented young people in the northern capital. “And they were in the city only three days. And we passed three rounds of entrance exams in two days. And they were registered. That is all. Happening! Don’t walk away from him. These three days could fly by, my friend would not have noticed this piece of paper or he would have forgotten to tell me, and everything could have turned out differently…”

Life in Moscow was not sweet. So much so that today the stories about her seem like fiction. In the documentary film “Lazarev and Nemolyaeva. Once again about love ”, which Channel One showed 15 years ago, Lazarev’s friends said that once in physical education he fainted from hunger: the students sometimes did not have enough money even for a glass of tea. And in the hostel in winter it was sometimes so cold that he almost froze his head against the pillow … They say that Lazarev was the tallest and most beautiful in the course. And for sure, the youngest: when he started studying, he was only 16 years old.

“Sveta is me, only in a female form”

After graduation, everything turned out to be very simple. So simple that it even bores. Lazarev was accepted into the troupe of the Mayakovsky Theater, and served there for 52 years, until his death. True, at first they did not see the talent in him, they took him because tall guys were required in Hamlet’s extras, and there were not enough of them in the troupe … But soon Lazarev already played a significant role in serious performances.

Yes, and with the film, everything passed elementary. Alexander Sergeevich played his first role in the film “Free Wind”, based on the operetta by Isaac Dunayevsky. Now both the operetta and the cinema are somewhat forgotten, and in 1961 the picture was seen by 16 million viewers. Lazarev had the main role, and all 16 million remembered him. Then there were the war movies Calling Fire on Ourselves and Retribution. And, in 1968, the role for which moviegoers primarily remember Lazarev – the physicist Elektron Evdokimov in the film “Once Again About Love.” It has already been viewed by 36 million. The sad love story of a physicist and a flight attendant played by Tatyana Doronina brought most of the viewers to tears. And it was after this image that Lazarev became popular all over the world: thousands of women saw in him the bright ideal of a man. All performances with the participation of Lazarev were sold out. Fans in the passion of him went crazy: they broke his car headlights, for example …

But he was faithful to the only woman – his wife Svetlana Nemolyaeva, who, like him, worked all her life in the theater. Mayakovsky. It was impossible to imagine them apart from each other. They just didn’t like spending time without each other. The actor’s son, Alexander Lazarev, Jr., said: “I don’t remember my father going to football or having a bath with friends. If he had free time, he spent it with his mother and me … “And Alexander Sergeevich himself said about his wife:” She is me, only in a female form. and I am she. It is impossible to feel that one can be alone.

And yet, alas, Svetlana Nikolaevna had to feel it.

Towards the end of his life, Alexander Sergeevich’s health began to deteriorate. In April last year, the actress herself said in an interview that she had felt bad in recent years. “We are playing with him in a play, I am agile, like a poker, I am running around the stage, and he tells me: ‘Sveta, I really want to go home so that we sit with you, I would have missed some glass and went to bed… And if they’re going to give me some role, do you know what I’d like? Very small, tiny, especially at the end of the performance, so that the staging was seated, or better, lying down, and there was always a protruding prop, that is, a kind of snack. So I laughed at him. But he really did not have health, he did not have strength ”.

And so, in May 2011, the denouement came. And completely unexpected. The actor underwent surgery, it went well, he came home to recover…

In an interview with KP, Svetlana Vladimirovna recalled: “In the morning she woke up, had breakfast and told me: “Sveta, I don’t want to die”. I say: “My God, Sasha, we will live with you, my dear!” But that’s what she said to her. I would say, just philosophically. We were in the field, she looked at the trees so thoughtful… she Died in her sleep. Five minutes later I got up-she was lying…she had already walked away. And Misha Filippov and Igor Kostolevsky called him at the last minute – they are friends for life … And all the actors! I am so grateful to everyone at the theater! Everyone wanted to protect him so that his experiences would not worry him… And so it happened.