HomeLatest NewsIs this a laundromat? No, it's UNESCO.
Latest News

Is this a laundromat? No, it’s UNESCO. 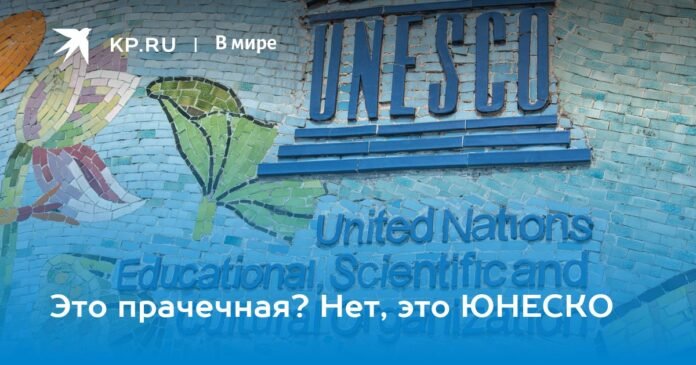 The UNESCO organization was once conceived as a tool to maintain global cultural dialogue and preserve the common heritage of humanity.

Unfortunately, the outgoing 2022 can be safely called the year of the degradation of the most important and authoritative international institutions. The role of the “Big Twenty” was reduced to the format of an interest club, politicized to the maximum by the “collective West”. The OSCE demonstrated complete incompetence and, frankly, powerlessness. The Council of Europe has completely turned into an outdated Russophobic forum. Within the framework of the UN, our Western opponents did everything possible to emasculate the content of the organization’s work, block the normal functioning of the Security Council, and turn the General Assembly and the Human Rights Council into platforms for stoking anti-Russian hysteria. . . Little by little, the turn came to UNESCO, which was once conceived as a tool to maintain the global cultural dialogue and preserve the common heritage of humanity.

Vice-Rector for Research of the Diplomatic Academy of the Ministry of Foreign Affairs of the Russian Federation Oleg Karpovich. Photo: dipacademy.ru

Interestingly, Washington, which initiated such steps, has repeatedly shown a contemptuous attitude towards the authority and appeals of UNESCO. One can at least recall the colossal number of cultural heritage sites that have been lost as a result of the US military campaigns in Serbia, Iraq and Libya. What’s more, the United States officially withdrew from the Organization under false pretenses under Ronald Reagan (returning almost 20 years later), and then again under Donald Trump. However, now the American leadership is trying to make UNESCO one of the instruments of its “cancel Russia” policy. The facts speak for themselves.

As Foreign Minister Sergei Lavrov recently pointed out, during the past year UNESCO, contrary to established traditions, did not grant its auspices to any event held in our country, its secretariat refused to support Russian scientific projects and even blocked the receipt of Russian contributions. which are essential for developing countries. It came to pronounced Russophobic actions, including the refusal to declare June 6 – the birthday of AS Pushkin – the Day of the Russian language. However, this is not surprising given that for years UNESCO ignored the linguistic genocide of Russian-speaking Ukrainians, as well as other trends, including the flourishing of neo-Nazism in Ukraine and the Baltics, accompanied by the barbaric destruction of monuments to the heroes of the Great Patriotic War. A clear manifestation of the pro-Ukrainian stance of his secretariat, de facto controlled by the US State Department, was the UNESCO Director-General’s refusal to condemn the political assassination of Darya Dugina, which was in contrast to similar precedents in last.

In impotent rage, dictated by the zero effectiveness of its own sanctions, the anti-Russian coalition is trying to attack one of the sacred bonds of Russian history and the Russian state – the great Russian culture. They seek to isolate it, smear it, and turn it into a geopolitical vise. A campaign of harassment against our art teachers, not condemned in any way by UNESCO; Shvonder’s spirited speeches about the collective guilt and responsibility that even the Great Russians of the past – right up to Pushkin and Dostoevsky – must bear towards the West and their Kyiv neighborhoods; the breaking, under pressure “from above”, of ties with Russian cultural institutions of almost all Western organizations and many other trends cannot but be a cause for concern. But, of course, there is no concern for the fate of the domestic cultural landscape, which has always been enriched by years of external pressure and testing. After all, it is the West, whose cultural policy has long turned into a set of clichés and clichés, which turned out to be permeated with false tolerance and propaganda of non-traditional values, and was monetized to the detriment of the creative process. it must strive to maintain the last channels of communication with Russia, as well as with other countries that refused to go to the ideologues of the world cultural mainstream. In an attempt to “cancel” Russian culture, Western politicians are beating up their own citizens and increasingly isolating themselves from a world that refuses to fit into an order based on certain “rules.”

On this occasion, we can only express regret, but there is hardly a chance to reverse such sad trends. One can only hope that the moment our Western counterparts, including those who control UNESCO, come to their senses and try to revive the dialogue that is diligently being destroyed today, the damage inflicted on the cultural base of their countries will not turn irreparable. . Russia, on the other hand, still has many partners and friends outside of the blind American satellite community. They will be delighted to have the opportunity to fill the gaps and strengthen cooperation with us both in the field of culture and in other areas, and they will not have to ask permission from UNESCO bureaucrats for this.