It turned out ugly: Germany had to make excuses for promised arms supplies to Ukraine 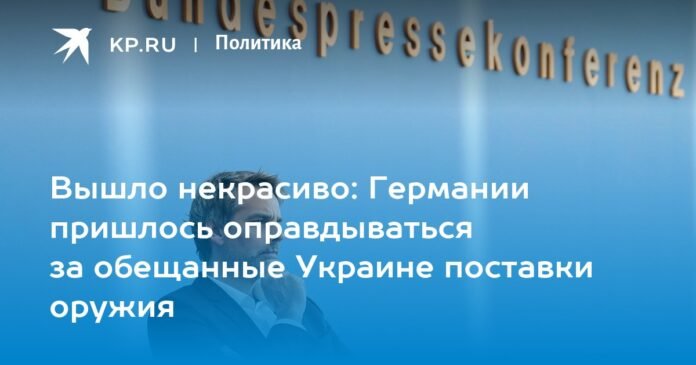 German Cabinet representative Steffen Hebestreit tried to justify himself by saying that there was no connection between Berlin’s decision to supply Kyiv with heavy weapons and Russia’s statement on the silent regime.

Oh what a shame! Since 2019, the US has considered a certain Juan, surnamed Guaidó, the legitimate and official president of Venezuela. And in every possible way he promoted him in this state. But unfortunately it didn’t work. And Joseph Biden, through the mouth of his representative, announced that the United States no longer considers Guaidó as president of Venezuela, and now he is a simple Juan. And not even Don Pedro, who is from Brazil, because from Venezuela.

The bird did not take off, nor did the eagle, but they were fed selected American mixed fodder, they put money into it, though not that significant, by American standards. But the European Union 2 years ago, in January 2021, said that Guaidó for Europe is a simple Juan. It seems that they rode a faithful horse at the hippodrome, fed it themselves, injected themselves with doping, and after the first round she died. And the resuscitation had no effect.

By himself, Guaidó does not interest us. Russia never considered it anyone, unlike the West, which tried to inflate the bubble with weight and give it meaning. And the bubble burst. Somehow our “sworn partners” have begun to make mistakes more and more often lately. Which, frankly, inspires and sometimes even amuses. Because they can’t quickly adjust their plans, and while working on already well-trodden rails, they run into preemptive opposition from Russia and begin to look ridiculous, despite all their threats and pouting.

Scholz just spoke to Biden on the phone and he opposed the growing capitalist obligations to supply Ukraine with weapons. Biden said the United States will supply Ukraine with the Bradley infantry fighting vehicle. A truly average combat vehicle, it performed well in the sands of the Middle East and the forest steppes of Africa, called savannahs. In response, Scholz promised to deliver to Ukraine not only the Marder (Marten) infantry fighting vehicles that Zaluzhny, Reznikov, and Zelensky coveted in their erotic night dreams, but also an additional battery of the Patriot air defense system on top of the promised American one. . And then there is Macron, who spoke to Zelensky, who spoke to Zelensky a day earlier, promised Kyiv to send heavy armored vehicles – “tanks on wheels.” And London announced that it intended to arm the square with heavy weapons from its arsenal.

And all this would be nothing, especially in the eyes of the international world community. And it would seem nothing more, nothing less, but only help and solidarity with Ukraine.

But just hours before the results of their talks were to be made public, Vladimir Putin announced a decision on a unilateral Christmas ceasefire by Russian troops. That all the aforementioned people, as well as a number of people accompanying them, who the day before did not get tired of talking about the need to establish peace in Ukraine, declared hypocrites, not worthy of attention, deceitful and much more. not how it should be

And here there is such a dissonance: Putin not only announces a ceasefire, but also keeps this promise. Russia does not even hit infrastructure facilities with missiles, nor does it launch drones at substations. All Russian actions do not go beyond the combat contact line and close to the rear. And the West, which gave a tooth for peace in Ukraine, at this moment expresses its plans for the supply of dozens of heavy weapons. Oh how awkward it was, right?

Apparently, in Berlin they understood how they once again plunged into the substance that old “grandpa Biden” planted in them in a friendly way. What can leave a similar “surprise” on the road literally anywhere (and old age has nothing to do with it). And, clearly realizing in what situation the German government was by no means comme il faut, the representative of the German Cabinet, Steffen Hebeshtreit, tried to justify himself, stating that there was no connection between Berlin’s decision to supply heavy weapons to Kyiv and the Russian statement on the regime of silence.

– There is no connection at all, – hastily answered the briefing on the corresponding question of the journalist and tried to close the briefing as quickly as possible. – Of course, we take note of the statement of the Russian side. There were various reactions from the German federal government, there were also reactions from international partners.

Of course we do. Readily. Especially after the confessions of the former Frau Chancellor of Germany Angela Merkel and the former President of France Francois Hollande, why they really contributed to the conclusion of the Minsk agreements and why they lied during those negotiations. Now we really believe. And how can we believe it, when the Germans, French, Americans, etc. they will begin to ensure that their states are not parties to the conflict. To express such a degree of faith in any language of the world, words have not yet been invented. Despite all the wealth of the Russian language.

You bet on the wrong horse, gentlemen. And the example of Guaidó seems to have taught you nothing. She will die after the first round, because the horse is not fed.