HomeLatest News“It was a firefly”: Sergey Mazaev commented on the departure of the...
Latest News

“It was a firefly”: Sergey Mazaev commented on the departure of the guitarist from the Dances Minus group Anton Khabibulin 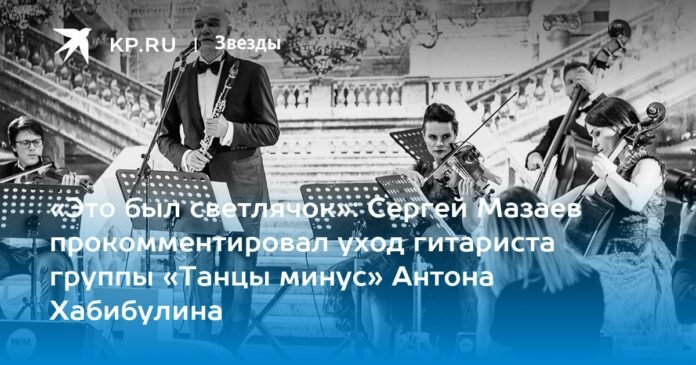 On December 20, as a result of an operation in a Moscow hospital, a musician from Yekaterinburg, Anton Khabibulin, died. Since 2006, he has worked with the Dances Minus group, and before that he collaborated with Moral Code, SBHR and even… wrote songs himself. KP managed to find out thanks to Sergey Mazaev, who produced the talented musician.

– First of all, I would like to note Anton’s human qualities, – Mazaev said in a conversation with KP.RU. -He was a very receptive, open and bright person. Such a “firefly”, you know? At the same time, he was an incredibly talented and hard-working musician.

– How did you start working with him?

– He was introduced to me by Alexander Marshal, who also appreciated Anton very much. I recommended him as an incredibly hard-working and talented musician who was diligent in rehearsals. He worked with us in the band for a while and also wrote great songs. They had a group “Trunks”, in which he sang together with another Anton-Sidorenko. He too, unfortunately, died. We released his album in 2007. Now, probably, we will release it on our label (“I want Brezhnev to keep everything the same,” Khabibulin sang on Trunks-Auth.).

I repeat once again, Anton was a first-class musician. Although I cannot comprehend what happened, the mind is incomprehensible. He often played in our orchestra … But a serious illness … It was difficult to do something in this situation. Blessed memory for him. We will miss Antonio.

Share
Facebook
Twitter
Pinterest
WhatsApp
Previous article
The Investigative Committee of the Russian Federation is investigating a series of fraudulent takeovers of apartments for the elderly in St. Petersburg KXan 36 Daily News
Next article
The Senate gives the green light to taxes on energy, banking and large fortunes