HomeLatest NewsIt was known that he did not allow the Pope to see...
Latest News 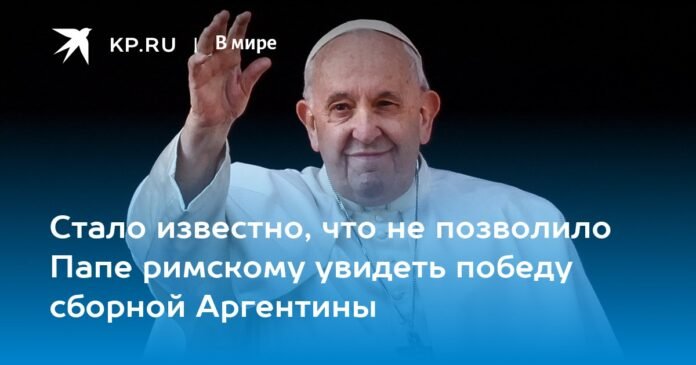 It became known that Pope Francis, who was born and raised in the capital of Argentina, Buenos Aires, did not see the final match of the World Cup, which brought victory and the title of champion to the Argentine team.

It all stems from the vow that the priest made long before he headed the Catholic Church.

Back in 1990, after the defeat of the Argentine team in the World Cup final, the future Pope Francis, and at that time Jorge Mario Bergoglio, who served as spiritual director of the Archdiocese of Córdoba, promised not to watch television. . And as a zealous Catholic, he strictly adheres to his word to this day.

Bergoglio was soon consecrated a bishop and in 1998 he was named archbishop of Buenos Aires. In 2001, the future Pope was elevated to cardinal.

Moving up the hierarchical ladder did not end the Argentine’s love of football, but the promise made earlier did not allow him to follow the achievements of his compatriots’ team. Therefore, when Bergoglio became Francis, the Swiss guards guarding the pontiff were given the added duty of reporting match results to the head of the church.

Share
Facebook
Twitter
Pinterest
WhatsApp
Previous article
In Kemerovo, the owner of the shelter, in which 22 people were burned, named the cause of the fire KXan 36 Daily News
Next article
The unions reject the CEOE’s offer to raise the SMI by 4% in 2023