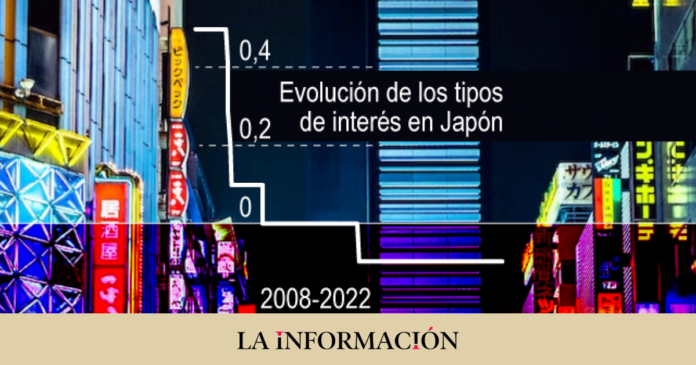 Japan threatens to leave the prison of the ‘liquidity trap’. The central bank of the Japanese country has caught the market by surprise with the relaxation of its ultra-expansionary rigid monetary policy after allowing the yield of the sovereign debt to 10 years reach a maximum of 0.5%, against the ceiling of 0.25% allowed so far. It is a small step for the institution chaired by Haruhiko Kuroda, but a giant step for the third world economy, which has been clinging to liquidity injections for more than two decades.

Although on paper interest rates remain intact in negative territory (-0.1%), the markets have interpreted this gesture as a change of course that opens the door to a rise in interest rates. Pilar Aranda, a Bankinter market analyst, anticipates that it will be in the spring when the “price of money” will awaken slightly from its hibernation and rise to 0%, a movement that will coincide with the departure of Kuroda as head of the BoJ.

The astonishment of the market has not been long in coming, causing a negative reaction on the stock market and a rise in interest on the ten-year bond of more than 50%, up to around 0.4%, an unprecedented threshold since 2015. The yen has also responded with a strong appreciation against the euro of 4.3%. At the close of the Spanish market this Tuesday, the yen was trading at 0.718 euros, while the revaluation against the dollar was greater than 4% and it was trading at 0.76 ‘greenbacks’.

Japan has tried for years to keep inflation to a minimum, which has now woken up in the heat of a rebound in world prices, reaching 3.6% in October, its highest level in four decades, above the BoJ’s target. It has done so at the cost of high debt. Its leverage ratio over GDP amounts to 262.5%, so the increase in the yield of the bonds will result in more expensive financing from the Japanese state.

Despite the reduction in its balance in recent months, the BoJ has a portfolio of just over five trillion euros. Inflation directly harms debt, raising interest and reducing its price. This may cause him to be forced to buy more bonds to control the yield curve, in the midst of a weak economy, which has registered a contraction of 0.3% during the third quarter of 2022, in contrast to the growth of 1.1 % accounted for during the months of April and June.

The last bastion of the big central banks falls

The decision, which a ‘priori’ may seem cautious, pushes the end of the ‘dovish’ policy of the big central banks worldwide. To date, the BoJ has remained reticent of any monetary tightening. Although it remains anchored in negative rates and denies its intention to make changes, this new stance brings it closer to closing a stage.

The guarantors of monetary policy around the world have been forced to change direction abruptly and quickly in order to put a stop to the increase in prices and change gears very quickly, beating the record at the rate of interest rate rises. . With the Federal Reserve setting the tone, the rest of the institutions took a little longer to follow. Among them, the European Central Bank (ECB) and the Swiss National Bank (SNB), which began to come out of the lethargy of rates in September, leaving only the BoJ, waiting for its new leader to put an end to the era. of the longest negative rates in history.

Share
Facebook
Twitter
Pinterest
WhatsApp
Previous article
Vladimir Putin, board of the Ministry of Defense of the Russian Federation December 21, 2022: live broadcast
Next article
White House: Kyiv will receive a Patriot battery, the US military will not go to Ukraine KXan 36 Daily News