Jon Enriquez and Beñat Arrizabalaga, two young people who work so that more companies can go digital and none is left out of the picture 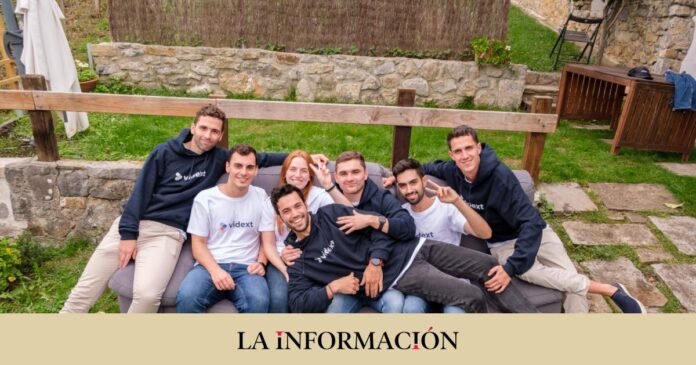 IN COLLABORATION WITH TELEFÓNICA

Jon Enriquez and Beñat Arrizabalaga are the protagonists of this Telefónica story that promotes access to digitization in any corner of the world. Under the name of Vidext, these two young Basques have managed to develop, in record time, an Artificial Intelligence (AI) startup that already has a dozen workers spread across the peninsula.

His company, which began as a final year project at Mondragón University, has now become a clear example of the power of transformative connections. In less than two years, they have pushed the progress of society and have shown that technology is a key tool to communicate, connect and grow both people and companies. An inclusive spirit that has also followed Telefónica for a long time and that, moreover, it promotes again in its latest campaign under the hashtag #TodosEnLaFoto.

With the aim of contributing to the progress of society as a whole and on a global level, the company defends that no one can be left ‘out of the picture’, since people are the ones who really give meaning to technology. In other words, each one of us has the potential to move communities forward, something that is only possible when there are more opportunities for everyone.

Focused on the audiovisual sector, Vidext offers the opportunity to create videos in more than 40 languages ​​only from text, eliminating all economic or training barriers that may prevent it. “We are making it easier for all companies to be digital. With this tool, those entities that work with more classic and static content, such as PDF or Word, can transform them into video,” says Jon Enriquez, CEO of the platform.

In addition to lowering costs and reducing production time to make companies more efficient, this startup has also contributed to “solving a big problem.” “We saw that there was an interest from several companies to quickly generate content in different languages. This caused us a lot of concern, we investigated and realized that Artificial Intelligence could help us,” he explains.

Undertake to provide solutions to society

The idea that emerged as a university project at the end of 2020, became a business in July 2021, at which time Miguel Ángel Castillo, current director of technology, also joined the project. “We entered Telefónica Open Future in May 2021 and when we saw that the project was minimally salable, they could set up the company,” he details.

As a catapult of talent and support for the growth of more than a thousand startups, Telefónica has become a valuable network for entrepreneurship. “We met several mentors within the program who gave us a lot,” Enríquez acknowledges when talking about the multinational’s acceleration program. A support that its founders still appreciate, since they also offered them “enough advice and help” in economic and financial matters.

“The more work we give, it will mean that the company is doing better”

A first impulse that has served to consolidate a successful business, since Vidext has helped to generate employment. With around 30 clients and a staff of 10 employees, the forecast is to continue growing: “The idea is to end the year with two more people and, if everything continues as before, add many more throughout 2023”. “The more work we give, it will mean that the company is doing better,” he says.

“Entrepreneurship gives us the tools to be able to solve problems and, in our case, help people to be more productive in their process,” insists Enríquez, who affirms that his technology “can have a positive impact” on those companies that request its services. A concept that the Spanish company has also promoted through Wayra, the most global and connected open innovation hub in the world, where it has invested more than 160 million euros in startups from 24 countries so that they can offer their technological solutions on a scale in scale. .

Technology, a key piece to contribute to progress

Vidext can be a useful tool for the field of training and e-learning, marketing and sales, support tutorials and, internally, for the Human Resources department. “It is much easier to retain information from videos. In addition, this type of format is one of the resources that young people value the most today,” she defends.

Currently, this startup only has a presence in Spain. “At the moment, it is our focus and where we want to have a greater relevance as soon as possible. Later, we will see ourselves expand through Latin America or closer countries,” he points out.

A strategy that conforms to Telefónica’s line, since it pursues connections throughout the world. Since its creation and to date, it has financed 1,300 startups, defending that the entrepreneurial spirit and, specifically, technology are a key element in guaranteeing social inclusion, reducing inequalities and boosting the economic growth of countries. In fact, Vidext has solved, based on a disruptive technological project, a manifest need in the market: “We have allowed any company, large or small, to create digital content”, he celebrates.

Regarding future projects, Enriquez indicates that they have the “technological challenge” of simplifying the contents even more: “We want this tool to be easier and easier and for the avatar to look more and more like a real human, both in voice and in image”. However, they confess that they are “very happy” with what they have achieved so far and hope to continue providing valuable solutions to both companies and individuals.