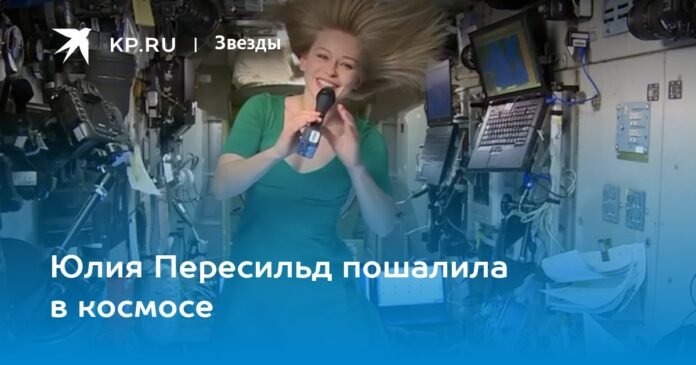 The first channel will show the musical number of Yulia Peresild, filmed in space

Each channel loves to absorb the audience more than Olivier on New Year’s Eve. Therefore, everyone is preparing impressive surprises for the audience. For example, Pervyy will show not only a special New Year’s concert with hits of the 2000s, but also exclusive footage from space, where Yulia Peresild sang the hit “Tenderness” (“The earth was empty without you”) on the ISS. .

“In space, you still need to remain a woman,” the actress believes. “And the fact that she had a dress with me added spice to our extreme trip. No one has ever flown into space in a dress. Unfortunately, there was no broom at the station… Well, do you remember what happened to my hair? I dreamed, of course, to fly there on a broomstick and feel like Margarita (from the novel by Mikhail Bulgakov – Auth.). But seriously, the dress was necessary for filming. Why exactly, you will find out after the release of our favorite “Challenge”.

As we remember, the star of the films “Edge”, “Battle for Sevastopol” and others, won the casting for the main role in the film “The Challenge”, the first film shot in space. Together with director Klim Shipenko and cosmonaut Anton Shkaplerov, the actress naturally went to the ISS, she spent 12 days there, filmed about 40 hours of footage with her colleague and returned safely to Earth.

Indeed, there on the ISS, in a state of weightlessness and 400 kilometers from Earth, Peresild performed the hit that Edita Pieha sang. How it looks, what will happen to the sound, and most importantly, the artist’s hair – the audience will find out on New Year’s Eve the first on December 31.