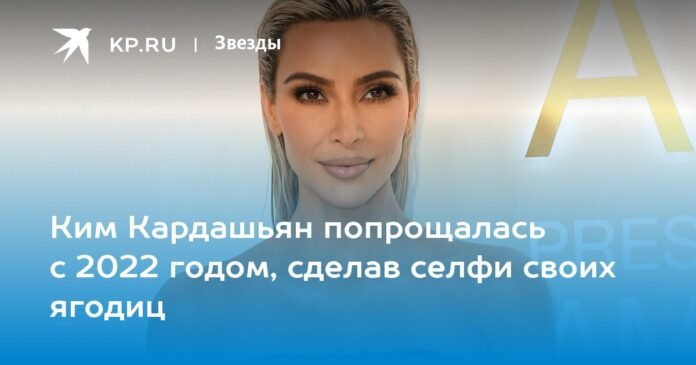 Kim Kardashian delighted fans with a new image of her famous buttocks. Thus, the 42-year-old model said goodbye to the outgoing 2022. The ex-wife of rapper Kanye West was photographed in a tiny bikini, sitting by the pool. Kim shared a candid photo on her page on the social network.

In the photo, Kardashian poses in a pink swimsuit from her brand Skims against the background of a pool of turquoise water and tropical vegetation. Kim took a “belfi” (butt selfie) by photographing the reflection of her butt in the window of her mobile phone.

“Looking back at 2022,” Kardashian captioned the snap.

Kim snapped a Belfie and captioned the photo: “Looking back on 2022.” Photo: social networks.

This year has brought a lot of excitement to the brunette. In March, the court officially divorced Kim from Kanye West. The ex-spouses continue to share custody of the children in court: the rapper and the model have four of them: 9-year-old North, 7-year-old Saint, 4-year-old Chicago, and 3-year-old. Psalm. It is already known that the musician will transfer $200,000 each month to his ex-wife for alimony. In addition, Kanye will pay half of the children’s education expenses and 50% of what is spent on his security (bodyguards, etc.).

Last year, Kim and Kanye often quarreled, and mainly over the children. The rapper accused his ex-wife of not allowing him to see the heirs. The musician said on social media that Kardashian limits her time with the children and insists that these encounters only take place in the presence of security guards. Also, Kanye was not happy with the fact that Kim allows her eldest daughter North to record videos and post them on social media.

The personal lives of the former spouses were also in full swing this year. Kanye dated model Julia Fox for two months before breaking up with her in February. Kim also had a stormy romance with comedian Pete Davidson. They dated for several months and broke up in early August. According to sources close to the couple, Kim is tired of this relationship. The model felt mentally destroyed by the “immaturity and young age” of her 28-year-old lover.

– Pete is completely spontaneous and impulsive. He wants her to fly to New York or wherever she is, anytime. But Kim has four kids and it’s not that easy. She needs to focus on the kids,” the source said.

Kardashian and Davidson started dating after they starred in a TV show together. Hollywood playboy fame has long been ingrained in Pete, and he often has flings with stars much older than himself. He dated Hollywood actress Kate Beckinsale, singer Ariana Grande, and Andie MacDowell’s daughter, Margaret Qualley. One of his last hobbies was model Kaia Gerber, daughter of supermodel Cindy Crawford.