HomeLatest NewsKirkorov's daughter is a princess with a crown, Zhukov's son is a...
Latest News

Kirkorov’s daughter is a princess with a crown, Zhukov’s son is a copy of dad: the stars brought the children to the premiere of the film “New Toy” 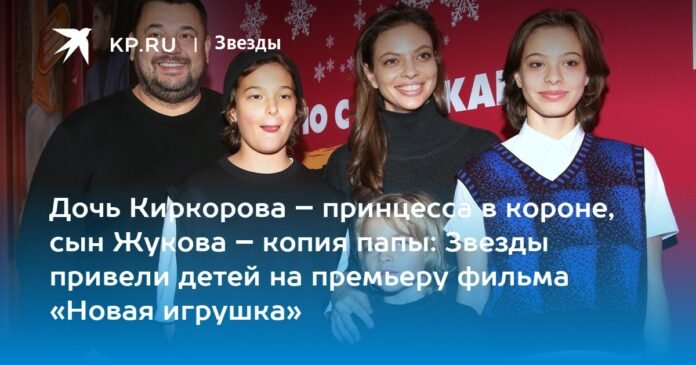 Sergei Zhukov with his family.

The premiere of the film “New Toy” was held in the capital’s “Artistic” cinema. The comedy with Pierre Richard, released in 1976, is known and loved by viewers around the world. No wonder the French decided to film a new version of the good old story. True, you will not see Pierre Richard in it. The place of the journalist François was taken by the security guard of the Sami shopping center. The popular French comedian of Moroccan origin, Jamel Debbouze, starred in the role of him (audiences know him well from the films Amelie and Asterix and Obelix: The Mission of Cleopatra).

The rest of the plot is the same: the young son of a millionaire comes to the store and demands that they provide him with a dozing watchman as a living toy. Sami has no choice, otherwise he will lose his job. For a substantial reward, the guard agrees to entertain the slacker 11-year-old, finally realizing that the boy is very lonely and in need of a loved one.

Mikhail Galustyan came to the show with his wife Victoria and their daughters: 12-year-old Estella and 10-year-old Elina.

The film opens on December 22. Russian stars were the first to see her, many of whom came to the cinema with the whole family, with children. The hero Jamel Debbuza in the Russian version was played by Mikhail Galustyan. The artist came to the show with his wife Victoria and his daughters: Estella, 12 years old, and Elina, 10 years old.

Philip Kirkorov also attended the premiere with his heirs.

Philip Kirkorov also decided to watch a remake of the famous comedy with his children. 11-year-old Alla-Victoria on the occasion of the premiere chose the image of a young princess. The heiress to the king of pop attended the parade in a black lace dress, silver shoes and a tiara in her hair. Her brother, Martin, 10, dressed in a Givenchy sweatshirt and cap. Felipe spares no money in the wardrobe of his heirs and always dresses the children in the latest fashion.

The singer brought his daughter Alla Victoria and son Martin to the show.

Soloist of the group “Hands up!” Sergei Zhukov is indifferent to fashion, although, like Kirkorov, he can afford the most expensive items from major brands. The ’90s disco star still collects stadiums, and his songs are still playing on every radio station and TV channel. Sergey prefers to invest his fees not in new fashionable clothes, but in a family business. Together with his wife, Regina Burd, former soloist of the Slivki group, he opened a chain of confectionery stores in Moscow that sells cakes and pastries.

Sergey Zhukov and Regina Burd attended the premiere together with their heirs: 14-year-old Nika, 12-year-old Angel and 8-year-old Miron.

The couple is raising three children, and that evening they attended the premiere together with their heirs: 14-year-old Nika, 12-year-old Angel and 8-year-old Miron. Guests of the show noted that the artist’s eldest son has grown a lot recently and has become an exact copy of his father. Zhukov’s children are already earning their own pocket money. Ángel, Miron and Nika participate in television programs and help in the family bakery. In addition, they recently made their film debut.