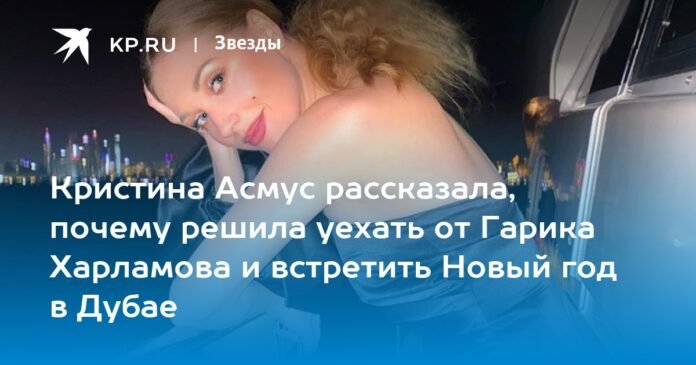 Christina Asmus spends her January vacation in Dubai. The actress celebrated the New Year in the company of her lover Roman Evdokimov, her daughter Nastya, her sister Karina and her niece Sofia. On social networks, Christina shared photos from the vacation. At the same time, Ella Asmus admitted that she did not want to leave Moscow, but she could not refuse her daughter.

“We are celebrating the New Year in Dubai for the second time in a row. It’s not what I wanted, of course, but my daughter drives me crazy. It was a beautiful, warm, cozy New Year in the company of those closest to us and surrounded by wonderful people. We rode a yacht, sang, danced and watched the fireworks from the most triumphant point in Dubai,” Christina wrote on her page.

The actress said that she agreed to celebrate the New Year in Dubai for the sake of her daughter Nastya. Photo: social networks.

Asmus’s boyfriend, Roman Evdokimov, also faked a Dubai frame on his page. Christine’s reflection can be seen in the window behind him. It was from this photo that the fans guessed that the lovers were resting together. Christina and Roman have yet to announce their relationship, although they spend vacations together.

The actress flew to the Emirates with her lover Roman Evdokimov. Photo: social networks.

The actress and her daughter stayed in a spacious apartment with elegant gray furniture and light-colored floors. The apartment has a kitchen-dining room combined with a living room. The interior of the apartment is decorated with plants in ceramic pots and paintings on the walls. On January 1st, Christina threw a fun party for her daughter and her niece. Christina invited Father Frost and the Snow Maiden directly to her hotel, who entertained the girls with tricks, games and dances.

While Christina and her daughter are resting in the hot Emirates, Garik took advantage of his wife’s absence and invited his beloved actress Katerina Kovalchuk to his home. Despite the divorce, Garik and Christina still live in the same mansion on Rublyovka. So Garik hardly dares to invite a girlfriend to his house in the presence of his ex-wife. But on New Year’s Eve, the showman showed on social networks with whom he celebrated the holiday. The photo shows his and Katerina’s mother, gently hugging near the New Year tree.

Recall that Garik and Christina live together, it became known a month ago. The showman, on his YouTube show, said that he left his ex-wife a “house of vomit and piss.” She responded on social media that he didn’t leave her any home and money too. Word for word, and in the course of a public skirmish, the actress’s subscribers were shocked to learn that two years after the divorce, Asmus and Kharlamov still share a living space for two.

It surprises many: how does beloved Asmus cope with the fact that she still lives under the same roof with her ex-husband and ex-mother-in-law? It seems that so far the lovers can’t do anything about it. On social networks, Cristina hinted that her ex-husband forced her to stay with him in the same house with threats.

The fact that she is happy and in love, 34-year-old Christina announced last year. Asmus and Evdokimov work together at the Yermolova Theater under the direction of Oleg Menshikov. Roman is six years younger than Christina.