HomeLatest NewsKyiv is confident that the conflict in Ukraine will end soon. ...
Latest News

Kyiv is confident that the conflict in Ukraine will end soon. But Russia has a different opinion on this matter. 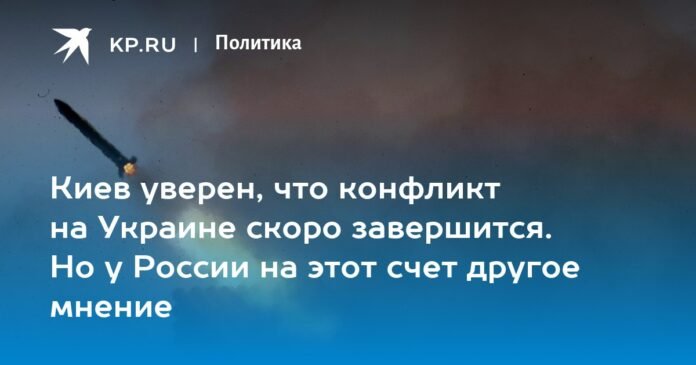 The conflict will not end within two or three months

The Russian military will adapt to the Patriot anti-aircraft missile systems, as they are now successfully countering the already delivered NATO weapons. However, such withdrawals lead to a significant prolongation of the conflict. This opinion was expressed by the historian and military expert Yuri Knutov on the morning air on the Komsomolskaya Pravda radio.

– Secretary of the National Security and Defense Council of Ukraine Danilov called the next two to three months of the conflict decisive. What do you say? Or is it for years? asked Ivan Pankin, one of the hosts of the morning show What Will Be.

– The conflict will not end in two or three months, – said Yuri Knutov. “It will last maybe two or three years. Moreover, this duration is not so much determined by us: if it were not for the help of NATO, we would have already successfully completed the special operation three months ago. By that time, we had destroyed the main types of weapons of the Armed Forces of Ukraine: 80-95% of tanks, armored vehicles, aircraft, anti-aircraft missile systems, MLRS and long-range artillery. The Kyiv regime would simply have nothing to fight against.

Then came Soviet-style teams from the former Warsaw Pact countries, which are now in NATO. We also demilitarized it, and now, for the most part, purely NATO weapons are already in place.

In these conditions, it is useless to talk that we are now going to start an offensive, as in the years of the Great Patriotic War, to cut down, encircle, crush.

By the way, we must not forget that the demilitarization of the NATO bloc is going more or less well in our country. At the latest meeting on arms supplies to the Kyiv regime, 20 out of 30 countries said their military arsenals had been depleted. And of the remaining 10, only the United States is ready to supply weapons in approximately the same volumes that they supply now. If it were not for the policy of the United States, it could be said that in two or three months the special operation will end with our victory and the capitulation of the Kyiv regime. Unfortunately, Washington is not interested in this. The US military-industrial complex just smelled money. For a long time, Afghanistan allowed them to receive quite serious income, and the operation in Ukraine increased the amount of such income from the sale of weapons dozens of times compared to Afghanistan. A cascade of money fell on them, why should they suddenly give it up? Never! They will pay colossal fees to their lobbyists, they will pressure other states to continue this war. And the fact that people are dying, they do not care. There will be a delay in the conflict because of Washington, in the first place.

– So why does the head of the National Security and Defense Council Danilov make such statements?

– In this way they are trying to encourage their armed forces and the population, give a breath of optimism. The depression is too strong right now. They say: we will capture Melitopol in two or three months, we will go to the Crimea. In the summer, Zelensky will already rest by the sea, which means that the Crimea will be Ukrainian.

PATRIOT HAS MANY FAULTS

– Vladimir Putin said that Russia does not intend to repeat the mistakes of the past, when in order to increase defense capabilities it destroyed the country’s economy. “We will not get involved in the militarization of the country and the economy.” What are the errors?

– I mean the Soviet period, when the production of consumer goods was in the backyard. Televisions, radios were produced mainly from discarded parts. Transistors for defense needs were produced, a batch was checked, a certain number turned out to be defective, all this batch is sent to the production of televisions. And then they break after six months. All this caused serious discontent. The money went to armaments, to the maintenance of the army. In the 80s, we found ourselves in such a situation that the stores were empty, the clothes were incomprehensibly what size and shape. And all this formed the most serious discontent, which, among other things, contributed to the collapse of the Soviet Union.

– We laughed when HIMARS was delivered to Ukraine. But HIMARS turned out to be very combat ready. Now the Americans are transferring Patriot air defense systems to Ukraine …

– At first there were javelins, we were very afraid of them. And then it turned out that they came up with something interesting, cheap, primitive and simple, but very effective, which protects armored vehicles from them. Same story with HIMARS. They hit with precision and efficiency. Time passed, we worked out the technology to shoot them down: algorithms appeared, flight telemetry was recorded, and software was developed. We put other air defense systems, we shoot down up to 80%. The same story will be with the Patriot: at the beginning they will work effectively, we will study them, we will see the frequencies, the characteristics… They have many vulnerabilities. The sector is not 360 degrees, but 90 degrees. Big problem with mobility. 25 minutes the complex unfolds and collapses. Our complexes do it in 5 minutes. In modern warfare, 25 minutes is an extremely long time. During this time, the complex can be detected and destroyed. We have anti-radar missiles, which we will also modify for Patriot frequencies.

HIMARS hits with precision and efficiency. Time passed, we figured out the technology of how to shoot them down. Photo: US Global Air Force/globallookpress.com Press

A Patriot is worth a billion dollars. A Patriot missile costs between 3 and 4 million. Autonomy from 80 to 200 kilometers. The European version of the missiles in the same Germany has a range of 160 kilometers. The complexes deployed on the territory of Poland, along the border with Ukraine, will create a virtual no-fly zone over the territory of Western Ukraine. That is the danger. There you can place bases, headquarters, warehouses, training centers, command posts in Western Ukraine. And all this will be covered by Patriot, who are on Polish territory, in which we cannot shoot.

A Patriot is worth a billion dollars. A Patriot missile costs between 3 and 4 million

What the Patriot will give Ukraine is to see how these systems behave in real combat conditions. They will be effective against cruise missiles. But against drones, I doubt it. This is the same as shooting sparrows with gold bullets.

Share
Facebook
Twitter
Pinterest
WhatsApp
Previous article
The main failure of the World Cup is Germany, which again did not leave the group. Are?
Next article
Bulgaria started sending weapons to Ukraine KXan 36 Daily News