Labor grants support the signing of women, young people and people over 45 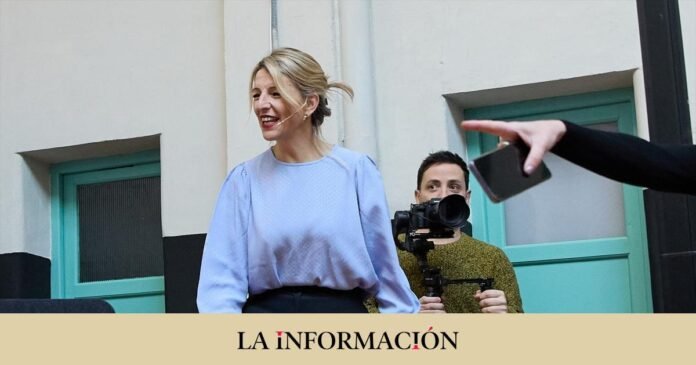 Since Yolanda Díaz held the Labor portfolio, her legislative reforms and her public policies have been aimed at encouraging permanent contracts, reducing temporary employment and precariousness. For this reason, in the same line of the labor reform, the second vice president has brought to the Council of Ministers this Tuesday a restructuring of aid for hiring. Likewise, with the new norm, Work seeks to improve the employability of those groups that have enormous difficulties: victims of gender violence, people with disabilities, unemployed people over 45 years of age or young people, among others. The new standard will start working in September.

Thus, with Royal Decree Law 1/2023, incentives were introduced for permanent contracts at the same time that the aid that currently exists for temporary employment will be cut. The objective is that public aid is exclusively used for stable employment. Until now, Work had designed a series of bonuses that rewarded the conversion of temporary into permanent. The problem, as they referred to the workers themselves, is that many were fired after making them permanent (and, consequently, after receiving the money from the company).

They will only be maintained for a single case, which is the transformation of temporary contracts in agriculture into ordinary discontinuous permanent ones, whose contribution will be subsidized for three years with 55 euros per month, a figure that in the case of women will be 73 euros. For the rest, with the new bonuses, whoever receives the incentive will have the obligation to maintain employment for 3 years. After being implemented, the Government will take care of evaluating each of these new measures. In this way, the ones that work will be kept and the ones that will not have the expected effects will be withdrawn. The contract modalities that will be able to appreciate these new SEPE aids are the following:

✅ Recruitment incentives must have a clear premise: create decent work through indefinite and full-time hiring.

This is the main objective of the new measure approved in the #CMin in line with the Employment Law and the labor reform. pic.twitter.com/udrdHbrR6U

The indefinite hiring of people registered in the employment office for at least one year in the eighteen months prior to hiring, will entitle the company to a contribution bonus of 110 euros per month. When these contracts are entered into with women or people aged 45 or over, the bonus indicated will be 128 euros per month.

Bonus for training and relief contracts

The transformation into indefinite training contracts at the end of their duration, would give the right to a bonus in the contribution of 128 euros per month. In the case of women, said bonus will be 147 euros. In the case of this, it is foreseen with the relief contracts, the contribution will be 55 euros per month and, if they are women, said bonus will rise to 73 euros.

Support for the extension of fixed-discontinuous

According to the new standard, “companies, excluding those belonging to the public sector, dedicated to activities within the tourism sectors, as well as those of commerce and hospitality, as long as they are linked to said tourism sector, that generate activity productive in the months of February, March and November of each year and who start and/or maintain the employment of workers with fixed-discontinuous contracts during said months, may apply a contribution bonus in said months, of 262 euros per month”.

The indefinite hiring or the incorporation as a member in the cooperative or labor company of the people who carry out practical training in the companies by the company where they carry them out, will entitle them to 138 euros per month for a maximum of three years, except that the hired worker is a person with a disability, in which case the bonus may be applied throughout the term of the contract.

The training activity in the workplace, linked to the alternating training contract, will give the right to bonuses in the company’s Social Security contributions to finance the training costs. In this sense, when the alternating training contract is formalized with beneficiaries of the National Youth Guarantee System, the maximum amount of the bonuses that the company may apply to finance the training costs will be the one that results from multiplying the corresponding economic module for a number of hours equivalent to 50% of the day during the first year of the contract, and 25% of the day the second.

The indefinite contracting of people with limited intellectual capacity will entitle them to a contribution bonus of 128 euros per month for four years. People with limited intellectual capacity are considered to be those people registered in the Public Employment Services as unemployed job seekers who officially certify, according to the current assessment scales of the disability situation, at least 20% cen and not reaching 3%. .

The indefinite hiring of women who will have accredited the status of victims of gender violence, sexual violence or trafficking in human beings, sexual exploitation or labor exploitation, and women in prostitution contexts will give the right to a bonus in the contribution 128 euros per month for four years.

Bonus for changing job position due to risk during pregnancy, lactation or occupational disease

In the cases in which, due to risk during pregnancy or risk during breastfeeding, the worker is assigned to a different job or function and compatible with her status, it will be used with respect to the fees accrued during the period of permanence in the new job or role, a contribution bonus of 138 euros per month. Likewise, this bonus will be applicable in those cases in which, due to an occupational disease, there is a change of job in the same company or the performance, in a different one, of a job compatible with the status of the person. employee

The indefinite contracting of workers in a situation of social exclusion will entitle them to a contribution bonus of 128 euros per month for 4 years. For the purposes of applying the fee bonus, the company must have prior accreditation of the situation of social exclusion by the social services or competent public body and keep the supporting documentation for five years available to the competent bodies, surveillance and control of bonuses.

Bonuses for victims of terrorism

128 euros per month for four years.

Bonuses for carrying out the alternating training contract

Grants for the pre-doctoral contract modality

The hiring of research personnel under the modality of pre-doctoral contract will give the right, during the term of the contract, including its extensions, to a bonus in the contribution of 115 euros per month.

Bonuses for joining as partners

The incorporation of the unemployed as worker or labor members to cooperatives and labor companies, will entitle them to a bonus in the contribution of 73 euros per month for three years, when said entities have opted for a system of Employee Security. If the incorporations are carried out with young people under 30 years of age, or people under 35 years of age who have a recognized degree of disability equal to or greater than 33%, the bonus will be 147 euros per month during the first year, and 73 euros per month. month for the remaining two years.

Share
Facebook
Twitter
Pinterest
WhatsApp
Previous article
Don’t wear armor, don’t wear pink and don’t Sinatra: The most ridiculous laws in the countries of the world
Next article
An ice-free bay froze over in Vladivostok due to abnormal cold – Rossiyskaya Gazeta