HomeLatest NewsLaima Vaikule brought to light: the ins and outs of the scandalous...
Latest News

Laima Vaikule brought to light: the ins and outs of the scandalous statement on Russia and Alla Pugacheva revealed 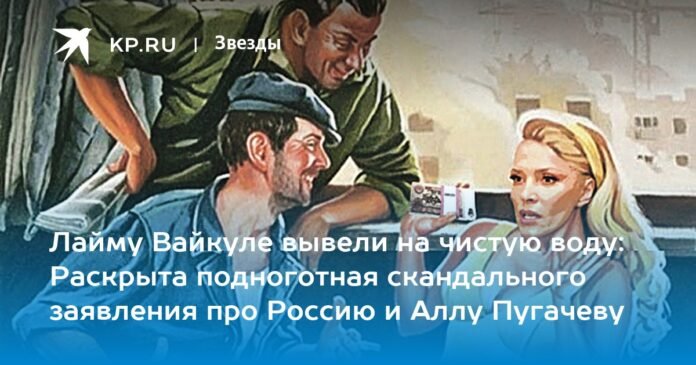 Recently, Laima Vaikule’s statement has been hotly discussed on social media. Remember that the 68-year-old People’s Artist of Latvia said in an interview: “I supported the Philharmonic, I supported the Soviet Union by releasing my CDs. Because I received 17 rubles, picking up a stadium for 45 thousand people. The Melodiya company sold my record in 20 million copies, and I received 137 rubles for it. I worked and supported the entire Soviet Union. And Alla (Pugacheva. – Ed.) contained all of Russia. We have earned so much money for the USSR that it is embarrassing to say it.”

Many were outraged. And publicist Mikhail Shakhnazarov sarcastically remarked: “One man fed the entire Soviet Union, but now he can’t feed a small impoverished Latvia. How does it happen? Mental activity, Lyme, this is not yours.

The scandalous Latvian politician, former member of the Seimas Aldis Gobzems did not stand aside either. He affirmed: “Lima’s recognition of financing the USSR is a way out. This is international terrorism. This is financing the occupation of Latvia!”

But emotions are emotions, but what was the situation with the income of Soviet artists in reality? Together with the experts, Komsomolskaya Pravda found out who, besides them, stayed with the pop stars of the USSR.

“Music income was not very notorious”

– Let me remind you that entrepreneurship, including creative business, was prohibited in the USSR, – says Yevgeny Safronov, editor-in-chief of the InterMedia news agency, academician of the Russian Music Academy. – Performers, like all creative workers, were in the service of state institutions, or in the so-called creative unions and other structures subordinate to the state. They received a flat rate and performance fees at rates approved by authorities at various levels. The right to the highest rates was established by the USSR Ministry of Culture. The system is inflexible and hardened.

One of the main problems back then was unfair pay. As early as the 1970s and 1980s, the state concert system, and especially the Melodiya firm, was earning hundreds of times more from the most popular artists than they were paid as fees.

In part, this injustice was compensated by the advantages of socialism: in addition to earnings at the general and academic level, the creators generously received, free of charge or on preferential terms, apartments, workshops, dachas, cars, etc. The authorities also often turned a blind eye to gross violations of the then strict legislation in the field of culture. And for the artists, loopholes for not entirely legal income were opened.

However, to say that pop artists in the USSR “supported the country” can only be a person who is not familiar with arithmetic. Even in the 1980s, the USSR was the world’s second-largest economy, and revenue from music did not show much in the Union’s gigantic budget. And, of course, we note the huge investments of this income in the sphere of culture – this is musical education, the widest support for amateur art, providing the same stars with rehearsal rooms, equipment, construction of concert halls , theaters, infrastructure. … There was no system of this magnitude anywhere in the world. A significant part of the money went to the development of young talents, the support of those creative workers who were not yet known and in demand. So we can say that the proceeds from the concerts of Alla Pugacheva, Yuri Antonov, Valery Leontiev, “Time Machine”, “Gems”, “Earthlings” de facto went to the development of culture, remained in the industry.

Get more members of the Politburo

– I can argue with every argument of Vaikule, with every word! – producer and coach Elena Shchegoleva is outraged. – But let’s talk about 17 rubles. She received such an amount (according to Vaikule) as a fee during the Soviet era. This is for a concert. And if she counts all the income, then in those days the artists of the pop genres had earnings several times higher than their monthly salaries. For example, the average earnings of stars per month could be from 1,500 to 3,000 rubles. All of them received a salary according to the scale of fees and fees for each appearance on the stage. Moreover, the average salary in the USSR, for example, in 1975 was 133.54 rubles. A member of the Politburo of the Central Committee of the CPSU had a salary of 1200 rubles, a minister – 700 – 800 rubles.

Before perestroika, pop artists from the USSR were evaluated in three categories.

Singers of the first category earned 3 rubles per concert.

This fee was in addition to monthly salaries.

People’s artists for the concert were paid several fees at once. For folk song performers, the stakes were higher than for artists. All fees were canceled after perestroika and fees became negotiable.

ALL THE FAMILIAR FACES

Laima Vaikule: from songs to perfume

Let’s study the income of the most popular Soviet artists in more detail.

In the early 1970s, Vaikule was a soloist with the Riga Radio and Television Orchestra under the direction of Raimonds Pauls. In the mid-70s, she went with the rock band “Shabashit” in restaurants in the resorts of the Black Sea coast. From 1979 to 1984 she worked in Jurmala: he sang in a variety show, in a hotel restaurant, in a bar. In the mid-1980s, Laima, with a ballet and a group, created her own show. In 1984, Vaikule first appeared on Central TV.

All-Union popularity came to her in 1987, when they showed a television version of Raimonds Pauls’ creative evening at the State Central Concert Hall, and the singer’s first two hits came out. The premiere of Vaikule’s first solo show took place only in 1988. Therefore, in the USSR the artist was popular and actively toured for only three years.

Vaikule started earning a lot of money after the collapse of the USSR. In 1993, the singer started her own business in Latvia: she created a company that sells hair cosmetics, equipment for beauty salons. From the “zero” the company worked in Russia: Vaikule owned half with a partner. In addition to selling cosmetics and salon equipment, she even opened the Hairdressing Academy. The company’s revenue in our country for the past year is 390 million rubles. At the end of the summer, Vaikule left the Russian business. The singer also earned money in Russia – with concerts, wildlife sanctuaries, filming on television until the beginning of a special military operation. In Moscow, Vaikule left an apartment of 114 square meters. m on Zoo Street.

As it stands now: Vaikule’s fee for a private concert for the past three years has been 30 thousand euros (2 million rubles).

Until 1975, the AB fee for a concert was 10 rubles. The fee grew along with the popularity. In 1980, the singer was awarded the title of “Honored Artist of the RSFSR”, in 1985 – “People’s Artist of the RSFSR”. Thanks to the titles, he was paid two fees for the concert – 38 rubles, plus they paid an additional 9 rubles 50 kopecks “for skill”. The star went on stage at least 15 times a month and in this case he received 712 rubles 50 kopecks. And the average salary in the USSR in 1985 was 190 rubles a month.

There were many tours. Often the stars traveled, for example, the Sverdlovsk region in two weeks – this is about 20 concerts! The rate did not depend on the number of people in the room: it could be a circus, a philharmonic society, a rural recreation center… In addition to free flights, hotels, food, costumes, equipment. The work of the entire team was also paid: administrators, musicians. All employees of the institution in which they worked were supported by the income of the stars: they were lesser-known artists, musicians of orchestras, other employees … About 20% of the profits from the artist’s concert remained for other needs of The industry.

In 1991, Pugacheva became a People’s Artist of the USSR (the fee is more than 100 rubles for a two-part concert). But after the restructuring, the system changed. The artists shared with the organizers of the concerts, paid taxes and the rest – for themselves and the team.

As it stands now: Over the past five years, AB has agreed to sing at private events for 300,000 euros (20.2 million rubles). But it appears very rarely.

Yuri Antonov: money did not matter

The most popular author and performer in the USSR is Yuri Antonov. If an artist came to a city on tour, they stayed for several days: the tickets were always sold out. The maestro himself recalled: “The record was five concerts a day. The first concert is at nine in the morning. A typical case: in 1981 in Leningrad Antonov gave 28 concerts in 15 days. The singer had an average of 40 concerts a month.

Antonov’s first record was released in 1973, and he became very popular in 1983 after the appearance of the giant record “Under the Roof of Your House” on the Melodiya company.

The teacher never hid that he earned a lot of money: “In the Soviet Union, money did not matter. There was some limit, which was enough for a decent life. He had two Zhiguli cars: one broke down, I drove the second. Well, have dinner at a restaurant, buy gifts for a girl. It was impossible to buy an apartment…”

Unlike most of his theater colleagues, Yuri Antonov wrote hits himself. Antonov’s songs sounded not only in his performance, but also in the films, they were sung by the maestro’s colleagues. Most of Antonov’s income was song royalties. When the average salary of Soviet citizens was 100-120 rubles, Yuri Mikhailovich earned about 10 thousand rubles a month.

As it stands now: the artist’s fee for a concert at a private event is $250 thousand (15.8 million rubles). But the artist rarely agrees to perform: he is very selective.

Lyudmila Georgievna was awarded the title of “People’s Artist of the USSR” in 1973. She received a double fee, bonuses for the title, folklore repertoire. Since the beginning of the 80s, a Zykina concert was supposed to cost about 300 rubles.

The fee for a concert in the early 90s of Lyudmila Zykina was 2-3 thousand rubles. The average salary in the country was then about 6,000 rubles.

In a word, Vaikule’s statement is more like an emotional outburst from an artist who lost her business and huge profits at private concerts in Russia. Big pop stars – Pugacheva, Antonov, Leontiev, Rotaru, Magomaev and others – lived in abundance in the USSR, simply beautiful in comparison with their fans. But Vaikule was not among the best. And her hits were just a couple of songs. But Lyme understood well what is in demand in her country today: hatred of all things Soviet and Russophobia.

Share
Facebook
Twitter
Pinterest
WhatsApp
Previous article
“Grad” destroyed the equipment and manpower accumulation of the Armed Forces of Ukraine KXan 36 Daily News
Next article
Tom Hanks and Tilda Swinton: Empire has published a list of the best actors of all time