“Large-scale international platform”: summary of the first results of the International Business Week, which took place in Ufa 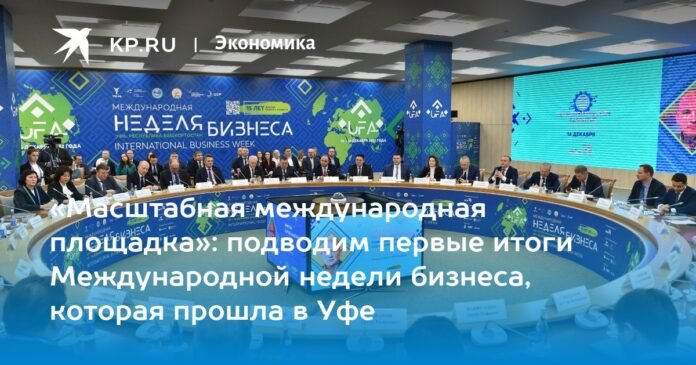 From December 14 to 16, Ufa hosted the International Business Week. The annual economic event, which has already taken place for the fifteenth time this year, brought together more than 3,000 representatives from government, business and the expert community. On the sidelines of the Forum, more than 50 business events were held, at which more than 500 speakers at the federal and international level spoke, including Russian Foreign Ministry Spokesperson Maria Zakharova, Deputy Minister of Construction and Housing and Utilities of the Russian Federation. Konstantin Mikhailik, the deputy of the Regional Council of Veneto Stefano Valdegamberi and the Secretary General of the SCO, Zhang Ming. Yes, you read that right, 24 countries participated in the event in person and online, from the UK, Germany and France to Turkey, Iran, China and various countries in Asia and Africa.

The Prime Minister of the Government of the Republic of Bashkortostan Andrey Nazarov summed up the first results of the forum.

“Business Week is a large-scale international platform,” said Andrey Nazarov. “Only in the first two days of work on the sidelines of our anniversary forum, almost 30 agreements worth more than 36 billion rubles were signed.”

The Prime Minister of the Government of the Republic said that the value of the International Business Week lies in the fact that it allows not only to develop new contacts with businessmen and foreign investors, but also, in general, sets the vector for the development of foreign economic activity. . This year has been special in terms of the unprecedented number of sanctions imposed against Russia. But these challenges have turned into new opportunities, and the Russian economy has been able to adapt to the sanctions.

The Prime Minister also mentioned the meeting of the international working group Ufa Dialogue. During the discussion, it was revealed that the positions of the hostile countries’ governments and companies differ significantly and that the European business community is interested in continuing business interaction with Russian partners.

This year, new approaches have been developed to develop foreign trade activities, support exporters and foreign investors. All these initiatives are packaged in a new 5S export strategy, which was evaluated by representatives of the Russian Export Center. It includes five main elements: speed, service, synergy, modern infrastructure, and incentives. The experience of the export strategy “5S” was noted by the First Deputy Chairman of the Federal Government Andrey Belousov.

“The effectiveness of the course we have chosen is evidenced by the fact that, despite all the restrictions, today we maintain commercial and economic relations with 113 countries in the world,” said the head of the Republican Cabinet of Ministers. – According to the results of 9 months, foreign trade turnover increased by 13.5%. It amounted to almost 4 billion dollars. We continue our investment cooperation. The geography of joint projects is quite wide – more than 10 countries. Projects with foreign participation represent around $90 billion of investments. We have always paid special attention to the development of cooperation with Asian countries. In modern realities, this is becoming a strategically important and critical area. Thus, the turnover of foreign trade with the countries of the Shanghai Cooperation Organization amounted to 1,400 million dollars. This is almost 30% higher than last year’s level.

Also, Andrey Nazarov emphasized that Bashkortostan positions itself as an effective hub for Chinese and Asian companies to enter the Russian market. However, this initiative requires further discussion and elaboration. He also stressed that a good communication platform for such purposes was the forum “Small Businesses in the Regions of the SCO and BRICS Member States”, which was held for the first time in Ufa in 2015. The head of the Cabinet of Ministers of the Republic noted that it is necessary to resume this tradition and hold a forum next year in Ufa.

The head of Bashkortostan, Radiy Khabirov, took part in the large section of BSC as part of the International Business Week as a flagship for the development of the chemical industry in Russia. The head of the region thanked the leadership of companies in the oil and gas and chemical sectors for the effective interaction with the republic and the high social responsibility of companies.

“The economic and social stability of Bashkortostan is closely related to the efficient operation of our largest companies. And we are very grateful to our flagship crews in the oil and gas and chemical industries for their tremendous work in today’s difficult conditions. First of all, it concerns Bashneft and Bashkir Soda Company,” said Radiy Khabirov. – Thanks to you, we are fulfilling two most important tasks: ensuring the development of the economy and supporting the Russian Armed Forces. With your participation we were able to take care of the families of the military who today defend our Homeland. Congratulations to you for your invaluable help!

The session participants discussed the current trends in the development of the chemical industry in Russia, the prospects for the development of domestic technologies and materials, including in terms of import substitution, as well as the possibility of expanding financial instruments for the implementation of the industry. investment projects

In 2022, the Turkish Exporter Turkish market was accredited in Russia. Bashkortostan turned out to be the region where the platform tested its first residents. Arsen Ayupov, General Director of the Russian-Turkish Dialogue Association, head of the Russian-Turkish working group in the RSPP, spoke about this in the section “The Republic of Bashkortostan – the Republic of Turkey: Industrial Dialogue in the New Economic Reality ” .

“This is a pretty big B2B market. Last year, Bashkiria turned out to be the region where it tested its first residents. We brought 20 companies to the platform for free, placed them there and as a result the first export contract was signed,” said the expert.

According to Ayupov, since 2022, Turkish Exporter has been operating at full capacity and has become an excellent alternative to outbound western sites, a good opportunity to enter the Turkish market and Middle Eastern markets.

It should be noted that during the first days of the International Business Week 2022 forum alone, almost 30 agreements worth more than 36 billion rubles were signed. One of the most significant was the concession contract for the creation of the Inter-University Student Campus of the world-class Eurasian Scientific and Educational Center”. This is the beginning of the creation of a modern scientific and educational infrastructure in the region.

The range of residents of the Alga and PSEDA Special Economic Zone is expanded. A new production of fiber and pectin substances will be launched for 4.5 billion rubles, the creation of a housing construction plant for modular structures and buildings for 9 billion rubles.

On the last day of the event, another 25 agreements and memorandums worth 57 billion rubles were signed, including concession agreements for the construction of 6 schools in the cities of Ufa, Sterlitamak, Neftekamsk and the Ufimsky district worth more than from 12 billion rubles. In agriculture, a new agropark worth 25 billion rubles will be built. Thus, the capitalization of the “contract” of the International Business Week will amount to 93 billion rubles.

“SDG CONTINUES TO BE THE BEST IN THE COUNTRY”

Andrey Nazarov held a strategic session “Digitalization of regional economic and urban management” of the “Smart City” working group of the Ministry of Construction of Russia. The Deputy Minister of Construction and Housing and Public Services of the Russian Federation, Konstantin Mikhailik, emphasized that at present, the construction industry has a multiplier effect for the entire economy. He paid special attention to the fact that such an effective and useful tool has been created in the republic as the Control Center of the Republic of Bashkortostan.

“The ODS, which is in the region, is not in vain still the best,” said the minister. – Colleagues see everything and respond promptly. They also see social problems that affect the development of the city. It’s a very difficult process.”

The Executive Secretary of the SCO Business Council, Sergei Kanavsky, also participated in the discussion. He told the meeting participants about the importance of the 2022 International Business Week for the Shanghai Cooperation Organization.

“Interesting questions were raised at the forum, results were obtained, the possibilities of creating regional platforms were tested, which are the initiators of many ideas. We came up with the idea to unite the efforts of the regions and the SCO Business Council and organize a single platform that allows the society of the regions to interact both at the regional and federal levels. Ufa is becoming a center of new ideas, new opportunities and new cooperation”, emphasized Sergei Kanavsky.

Sergey Paseko, Executive Director of Transport and Infrastructure at the Eurasian Development Bank, thanked the event organizers for the opportunity to participate in the forum, also noting that the construction of the Eurasian Campus will allow students, including those from the countries of the European Union, to exchange experiences.