Larisa Dolina, 67, danced in the Maldives in beach shorts 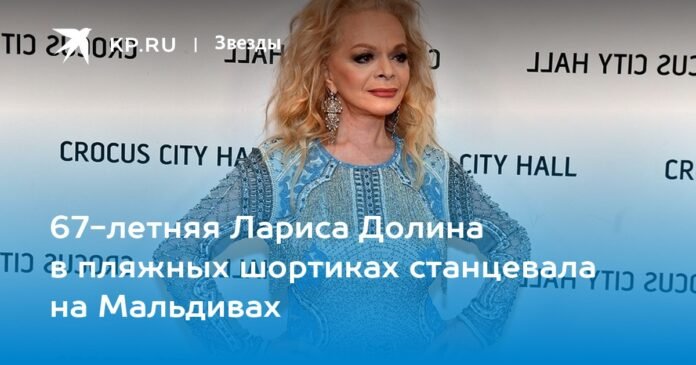 Larisa Dolina has changed her job for vacations this year. Just before the New Year, the singer flew her family to the Maldives. On social media, she shared spectacular vacation photos taken on a Maldives beach. The singer poses in microshorts and a mermaid print flared shirt. The actress did not stop showing off her slender figure and her slender legs.

In addition to the photo, the 67-year-old star also showed a video in which she dances against the sunset. In the video, Larisa Alexandrovna is dressed in the same microshorts that open her legs from the very hips. The singer made several incendiary passes, singing alone.

The singer is on vacation in the Maldives. Photo: social networks.

“What plastic! I was always amazed at how exquisitely Larisa Alexandrovna moves to the beat of the music”; “There is something elusive and unique about him: so elegant, so melodious, so expensive”; “She herself danced to the rhythm with you”, fans admire the dance of the star.

However, the artist also has enough detractors. Some netizens believe that he dresses inappropriately for his age. Larisa Alexandrovna has repeatedly made it clear that she does not care about the opinion of haters. The singer has repeatedly stated that she is not going to hide her figure under the robes and baggy clothes of her grandmother.

“I marvel at some comments from people who, it seems, accidentally got on my page and decided that their absolutely incompetent opinion would be listened to and taken into account by me…”, he replied to the envious people.

Larisa Alexandrovna shared a video in which she dances against the backdrop of the Maldivian sunset. Photo: video frame.

This year, la Valle decided to stop working over the New Year holidays to relax and take care of her health. The artist worked for two years without vacations and almost no days off. In addition to performances and filming for a TV show, Dolina is busy teaching (she heads the pop-jazz singing department at the Moscow Institute of Culture) and building her own jazz club. As a result, by the end of the year, the artist feels squeezed like a lemon. Larisa Alexandrovna admitted that she had great problems with sleep. After concerts, the singer often cannot fall asleep, so she is forced to resort to sleeping pills.

“Sleep is very important to me, but it has problems. I can’t sleep as many hours as it takes for my voice and beauty,” said Dolina.

By the end of the year, the singer realized that she urgently needed a vacation, otherwise she would have a nervous breakdown. She therefore refused New Year’s performances and bought tickets to a hot country.

“I will not work this year. I will go somewhere with my family,” Larisa Alexandrovna told reporters before the trip.

The singer went on vacation in the company of her daughter Angelina and her beloved 11-year-old granddaughter, Alexandra.