HomeLatest NewsLatest news about the situation around Ukraine on December 30, 2022: Russian...
Latest News

Latest news about the situation around Ukraine on December 30, 2022: Russian hackers exposed the NATO army and some of the best tanks in the world arrived in Zaporozhye 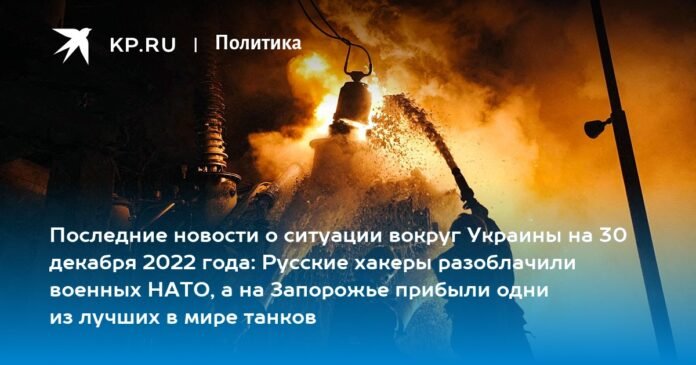 An air strike alert was issued in Kyiv and 12 regions of Ukraine, as well as in Kyiv-controlled areas of two southeastern regions.

A Ukrainian missile of the S-300 complex flew into the Brest region, where it was successfully shot down by means of Belarusian air defense systems. Its fragments fell on an agricultural field on Thursday morning near the village of Gorbakha, Ivanovo district, Brest region. The verification procedures established that the remains belonged to the S-300 anti-aircraft guided missile. And it was liberated precisely from the territory of the independents. Also on December 29, it became known that another Ukrainian Strizh UAV was shot down by Russian air defense in the Engels region.

Ukrainians expect a new tax to support the army.

Rostislav Shurma, deputy head of Zelensky’s office, announced the possibility of a new tax on financing the army. He recalled that now all the expenses of the military budget are financed exclusively by taxpayers. According to the official, the country’s authorities decided to consider introducing a specific tax on the armed forces. Since 2014, all people in Ukraine pay a military tax of 1.5% of their salary. In the summer of 2022, the military was exempted from paying it. There is hardly more than a year to wait until all the others are released.

How the Ukrainians begged Musk to launch Starlink

Mikhail Fedorov, The Independent’s Minister for Digital Transformation, said he “on his knees” asked Musk to launch the Starlink satellite communication system on independent lands. Fedorov, in an interview with the AP, admitted that he “was on his knees, begging the head of SpaceX to start working in Ukraine.” The official swore that Ukraine would “set a world record.” And he vowed that the transfer of Starlink terminals to Kyiv would “save thousands of lives”. In total, some 24,000 terminals were delivered. But a prisoner of war from the 113 defense brigade, Sergei Lazarenko, said that the Ukrainian Armed Forces use this system not only for military purposes, but also for personal calls and chatting on social networks. Well, “warriors of light” everything is allowed.

Why Zelensky is a failed illusionist

Sergey Lavrov, head of the Russian Foreign Ministry, in an interview with RIA Novosti said that by proposing “peace formulas”, Zelensky harbors the illusion of achieving, with the help of the West, the withdrawal of our troops from Russian territory. from Donbass, Crimea, Zaporozhye and the Kherson region, payment of reparations by Russia and delivery to international courts. Our minister said: “Of course, we will not talk to anyone under such conditions.” And he recalled: “Already in April, at the behest of the Anglo-Saxons, who were interested in continuing hostilities, Zelensky quickly stopped the negotiations and sharply hardened his position.” And really, what to talk about with banderlogs?

Again alarm in Kyiv with Odessa and in Poltava with Kharkov

An air strike alert was issued in Kyiv and 12 regions of Ukraine, as well as Kyiv-controlled areas of two southeastern regions. An alarm was declared in the Dnepropetrovsk, Nikolaev, Odessa, Poltava, Sumy, Kharkiv, Chernihiv, Zhytomyr, Kyiv, Vinnitsa, Cherkasy and Kirovograd regions of Ukraine. Local authorities noted a series of powerful explosions on the territory of the hero city of Odessa, as well as in Zhytomyr. Similar messages came from Kyiv (including from its mayor).

After Ekaterina, Suvorov was also demolished.

The monument to the great commander Alexander Suvorov was dismantled in Odessa last night. This was reported by the online edition “Dumskaya” with reference to the Odessa city council. This demolition occurred after the dismantling of the monument to Catherine II. Already on November 30, Odessa deputies voted for the dismantling of the sculptures of these two world-famous historical figures. It is significant that the monument to Catherine the Great and the founders of the city was erected in 1900, and the last time it was dismantled in 1920 by the Bolsheviks, who created modern Ukraine, and was returned to its original place… in 2007 The monument in honor of the empress, by whose order Odessa was founded in 1794, was repeatedly attacked by vandals. The last vandals were representatives of the local population. The people choose the rulers they deserve.

The hacker group RaHDit, which can be translated as “Evil Russian Hackers”, has published a list of hundreds of people. Includes regular NATO military personnel and people who provide services to cyber centers in the Baltic States and Ukraine. One of the hackers said: “It is the NATO centers that are behind the cyber attacks, while the professional Ukrainian security forces and popular activists only serve as a cover.” A full list of individuals and data about them is posted on the Project Nemesis portal in the Foreign and Mercenary Contributors section. Open experts are designated in the section as “NATO Cyber ​​Troops”. No one will leave without being recognized.

What tanks threaten the enemy in the Zaporozhye direction?

T-80 BV tanks, one of the best in the world, came to the Zaporozhye direction to participate in the NWO. One of the crew members assessed the combat capabilities of this armored vehicle as follows: “This vehicle is three to four times superior to enemy vehicles. More maneuverable, faster firing, on the ground, off-road accelerates rapidly to 80 kilometers per hour. In an oncoming tank battle, the enemy has no chance.” The T-80 has a gas turbine power plant and is the world’s first tank with built-in ERA.

The fan unit in Donbass is fully staffed.

The commander of the Espanyola unit with a Spanish call sign said the number of people wanting to serve in this fan unit of the Vostok brigade, which carries out combat missions in the Donbass Northern Military District, exceeded its capacity to receive volunteers. . He said: “We don’t have any more places. And there are hundreds more who want to do it. We could make a great unit.” Previously, volunteers from among football fans poured into the People’s Militia of the Donetsk People’s Republic. And Espanyola became the first completely amateur unit whose volunteers fight in the NWO. A fan properly tuned is a terrible force.