HomeLatest NewsLatest news about the situation around Ukraine on January 5, 2023: What...
Latest News

Latest news about the situation around Ukraine on January 5, 2023: What is the intelligence of the Armed Forces of Ukraine complaining about and how many Ukrainian sabotage groups were destroyed per day? 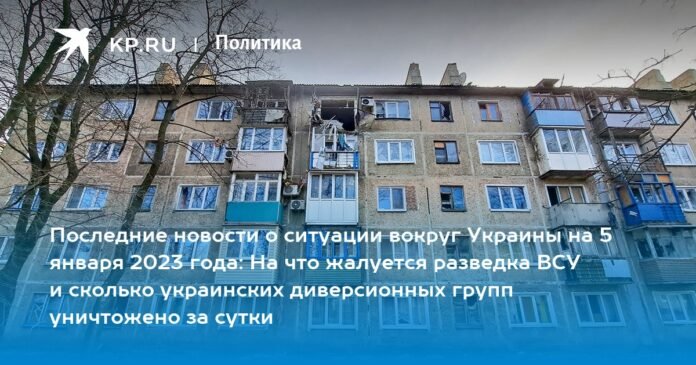 Saboteurs of the Armed Forces of Ukraine suffer losses

The Russian military immediately stopped several attempts to break the sabotage and reconnaissance groups of the Armed Forces of Ukraine. In the Krasnolimansky direction, the Russian Defense Ministry reported, Russian forces destroyed five sabotage groups at once.

“In the areas of the Nevskoye LPR Novovodyanoye, Serebryanka and Belogorovka DPR settlements, five enemy sabotage and reconnaissance groups were destroyed,” the ministry said. “In total, in this direction, the enemy’s losses per day amounted to more than 150 killed and wounded Ukrainian servicemen, one armored personnel carrier, seven armored combat vehicles and three pickup trucks.”

No less hot was the situation in the Kharkov region.

“In the Kupyansk direction, as a result of fire damage from the units of the Armed Forces of Ukraine in the areas of the Dvurechnaya, Sinkovka, Kislovka and Berestovoye settlements of the Kharkiv region, more than 40 Ukrainian servicemen, as well as two cars were destroyed in one day,” the Defense Ministry said. “In addition, an enemy sabotage and reconnaissance group was destroyed in the area of ​​​​the Liman Pervy settlement of the Kharkov region.”

Purge of Rada slips and creaks

Seventy deputies of the Ukrainian Rada refused to sign an appeal to the speaker with a proposal to deprive elected deputies from pro-Russian parties of mandates, which are now prohibited. The public movement “Honestly” reports that so far 96 signatures of the 150 required to include this issue on the agenda of the parliament session have been collected. Members of Yulia Tymoshenko’s Batkivshchyna faction, the one that wanted to “wet the Katsaps” with nuclear weapons, almost entirely refused to sign. Yulia Vladimirovna changed her shoes while she was jumping? Hardly… It’s just that many deputies have a strong sense of self-preservation. They understand that now pro-Russian deputies will be conditionally expelled from parliament, and tomorrow they will find an editorial for them.

Artillery of the Armed Forces of Ukraine fired on the peaceful neighborhoods of the city of Vasilyevka in the Zaporozhye region. The region’s acting governor, Yevgeny Balitsky, said on his Telegram channel that five people were killed and 15 more injured.

Among the injured were four employees of the Ministry of Emergency Situations. One of the rescuers is in critical condition. However, the bombardment does not stop.

“The cynicism of the Kyiv regime once again knows no bounds: a destroyed residential sector, injured civilians from the city, rescuers pulling people out from under the rubble. These are their goals and their methods,” the acting governor of the Zaporozhye region emphasized.

The Nazis also fired on Donetsk. According to the mayor of the DPR capital, Alexei Kulemzin, the building of the republican clinical psychiatric hospital was damaged during the shelling.

The Russian army in the DPR repelled Ukrainian counterattacks on the Dorozhnyanka settlement, which they managed to liberate on 31 December. As reported by the Russian defense department, immediately after the New Year, the Ukrainian Armed Forces launched several counterattacks in an attempt to regain control of Dorozhnyanka. But without success.

“In the direction of Yuzhnodonetsk, units of the Armed Forces of Ukraine unsuccessfully tried to counterattack the positions of Russian troops in the area of ​​​​the Dorozhnyanka settlement of the Donetsk People’s Republic,” the official Telegram channel of the Russian Ministry. Defense says. – All counterattacks are reflected, the enemy is returned to their original positions.

The Ukrainian military leadership has no information about the plans for the Russian offensive. This statement was made by the independent Deputy Defense Minister Anna Malyar in an interview with the correspondent of the newspaper “Strana”. According to the lady, Russia has several scenarios for the development of the events, but the command of the Armed Forces of Ukraine does not have time to receive information about them “due to the short periods of time that elapse between the sending of the orders and their performance”. ” If translated, it will turn out something like this: Muscovites are to blame for the ignorance of the Ukrainian military command, because they follow orders too quickly. In general, there is nothing to cover.

The Ukrainians are trying to burn more electricity.

Electricity consumption in Ukraine is growing – Ukrenergo made such a statement.

“Electricity consumption in Ukraine is growing due to a gradual decrease in temperature and the revitalization of business after the holidays,” the company said on a Telegram channel.

The energy company also reported that consumption limits have been introduced to ensure balance in the energy system in all regions of the country, the excess of which leads to the application of emergency restrictions. That is, to blackouts to which Ukrainians will have to get used to. After all, Russian attacks on military infrastructure, as well as civilian facilities associated with it, will continue. Thus, the Russian troops make it difficult for the delivery of equipment and ammunition to the front line. As Zelensky said in December last year, it is now impossible to restore the energy system of Ukraine.

The fight against monuments continues

In Dnepropetrovsk (in Ukraine this city is called Dnepr) the monument to the Hero of the Soviet Union Alexander Matrosov was dismantled. The name of the 19-year-old hero, who closed the embrasure of the Nazi bunker with his body, was included in the “black list” of the Ministry of Culture of Ukraine. This is a list of names that should not appear in names on the territory of Ukraine. And this despite the fact that Alexander Matrosov was born in Dnepropetrovsk, millions of residents of the USSR, including Ukraine, were proud of his feat. Matrosov was admired even by those who yesterday dismantled the obelisk in memory of his feat.

Alexander Matrosov was not the first. Previously, monuments to the outstanding Soviet pilot Valery Chkalov, the writer Maxim Gorky and the classic of Russian literature Alexander Pushkin were dismantled in Dnepropetrovsk.

In the Kherson region, in the house of an employee of the Security Service of Ukraine, Russian Guard fighters found things and documents of the German invaders of the Great Patriotic War.

Among the finds, according to the Russian Guard press service, are German helmets, elements of a military uniform with Nazi symbols, as well as “a bicycle pass issued to a local resident by the occupiers in 1942 and certified with the seal of the Third Reich.”

The collection was transferred to the Central Museum of the National Guard Troops of the Russian Federation, the funds of which are constantly replenished with new exhibits found during a special military operation.