HomeLatest NewsLatest news about the situation in Ukraine on December 31, 2022: Arestovich...
Latest News

Latest news about the situation in Ukraine on December 31, 2022: Arestovich revealed the terrible truth and Kawasniewski gave a catastrophic forecast 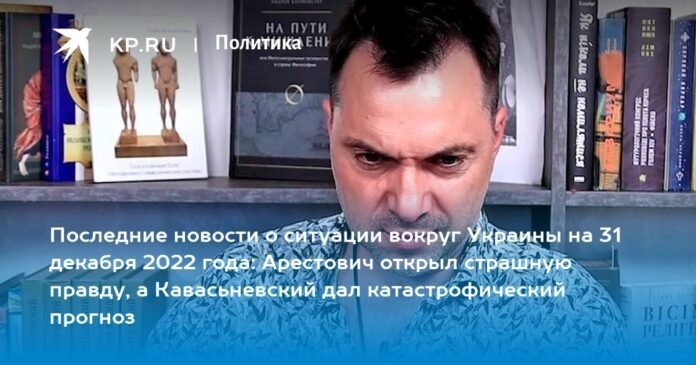 The border waters on one side no longer protect

Taras Melnichuk, the representative of the Ukrainian Cabinet in the Rada, said that Kyiv had terminated the agreement with Moscow on the joint use and protection of border water bodies. It has been in operation for 30 years, since October 1992. Yes, it is becoming more and more difficult for the regime to protect the banks of the Dnieper. And what will happen to the banks of the Danube… Therefore, to hell with that, with the agreement!

12,000 true patriots from the square tried to escape their purely European country due to martial law and a possible conscription into the army. These data were provided by the State Border Service of the Independent. Of the fugitives, at least 15 people died in the section of the river and in the mountains. Some even tried to swim to… Romania (obviously they hadn’t read The Golden Calf). It would be better if they collected their unfortunate heads for their homeland somewhere in the Donbass, well, or went out with a white flag …

Andrey Marochko, an officer with the LPR People’s Militia, said Ukrainian officers attributed heavy losses near Kremennaya and Svatovo to his command due to bad weather. According to intelligence, the officers of the Armed Forces of Ukraine complain that due to weather conditions, it is not possible to conduct reconnaissance of the area with drones. And due to bad weather, offensive operations slow down and Ukrainian soldiers become easy targets. The other day, even the sixth president recognized the great dangers for the Armed Forces of Ukraine as independent. According to him, the situation in Donbass is difficult and painful. But gradually it turns into the very western Seversky Donets.

In the LPR, representatives of the Russian special services detained a resident of the released Svatovo. It is suspected that the lady passed data on the movement of servicemen and equipment of the Russian Armed Forces to the special services of Ukraine. There is information that the Ukrainian Armed Forces could use the data transmitted by the attacker, including to inflict artillery strikes on civilian infrastructure in Svatovo. Earlier, FSB officers detained a native of the Kherson region, who conveyed information about the whereabouts of Russian troops to representatives of the SBU. The waiters waited so eagerly for “their own” that they expected jail.

Aleksander Kwasniewski, the former president of Poland, said the planet is in a state of “unsafe chaos.” The former leader of Poland said: “Since the beginning of the conflict in Ukraine, the world has changed dramatically. One era ended and a new unknown era began. According to him, other elements of the destruction of the world order were the election of Biden as president of the States and the aggravated contradictions between China and Taiwan. Kwasniewski suggested that both “Ukrainian” and “Chinese” conflicts could become global conflicts. It is significant that the former US President Joe Biden, after a meeting with Zelensky, said that the West, including the United States, does not seek war with Russia, as well as a third world war, supplying Ukraine with weapons. And then what are they striving for: the endless enrichment of their military-industrial complex?

Will a thousand British metal detectors save Kyiv?

London donated more than 1,000 VALLON metal detectors and 100 bomb disposal kits to Kyiv. The message on the British Cabinet website states that the mine action team will assist the Ukrainian Armed Forces to “clear minefields” and “secure civilian housing and infrastructure”. The information, in particular, says: “This is the last installment of support that Britain provides to Ukraine during 2022, and it will continue until 2023.” It is also indicated that London has provided the Independent with a significant package of air defense systems, including more than a thousand air defense systems and 125 anti-aircraft guns. And the Royal Air Force made more than 240 flights to Poland to deliver these cargoes further east. In 2022 the British trained 11,000 AFU soldiers and in 2023 they will train 9,000 more. Total military aid amounted to £2.3 billion. And they want to give the same amount to Kyiv next year. It’s not beer that kills people, it’s gifts that kill people.

General Wesley Clark, former head of NATO’s Joint Forces in Europe, said that the interests of Washington and Kyiv do not coincide at all 100 percent. The differences seem to be these: Ukraine wants the return of territories and the United States wants to stabilize the situation and reduce the risks of a confrontation between Russia and NATO. Clark spoke about this at an online conference hosted by the US-Ukraine Foundation. According to him, the states hope to keep as much territory as possible behind Ukraine without the start of a third world war. Clark believes the White House strategy is akin to “feeding the dead end,” which no one believes will be successfully resolved, but he continues to stick to the old line. In his opinion, Washington is “bleeding Ukraine”: the country is losing its infrastructure, losing its industrial potential. And Russia, Clark noted, is making a difference by building defenses. The general draws an original conclusion: Washington should send artillery mounts, MLRS and UAVs to Kyiv. Oh yes, Clark, oh yes, Strategist…

Yuri Ignat, spokesman for the Air Force Command of the Armed Forces of Ukraine, admitted that the S-300 air defense missile that fell on the territory of Belarus could be Ukrainian (are there other options, such as Greek or Turkish?). According to Ignat, this was possible. And I remembered the territories of other neighboring countries. The Ukrainian Ministry of Defense also announced its readiness to conduct an “objective investigation of the incident that occurred on December 29 in the sky over the territory of Belarus.” But Kyiv is ready to invite to the investigation only experts from among the countries that do not support Russia. Yes, everyone well remembers how Zelensky tried to “sell” his S-300 missiles, which killed peasants on the Polish border and wrecked a tractor, for retaliatory Russian weapons. Warsaw didn’t kick Kyiv, but Minsk?

The Armed Forces of Ukraine are suffering such heavy losses in the Artemovsk area (in the Ukrainian version – Bakhmut) and Soledar that Aleksey Arestovich, adviser to the head of the presidential office of Ukraine, is forced to admit it. He said with a sour face: “Traditionally, we have Bakhmut and Soledar. We are suffering serious losses…” On the eve of this statement, the commander of Akhmat’s special forces, Apty Alaudinov, said that the Ukrainian authorities were preparing to hand over Artemovsk, where the hottest point of the entire line of the front. . That is, when in Kyiv they come out of the narcotic fog and look to the east, they are horrified, declare the end of the world and return to the fog. Well, such…

Asia Times claims that Russian electronic warfare (EW) means are very effective in the fight against UAVs of the Ukrainian Armed Forces. Columnist Gabriel Onrada opines: “Russia may already be getting the best of electronic warfare in Ukraine, crippling its drones and blinding its artillery.” It refers to information from the Royal United Defense Research Institute (RUSI) of Great Britain. According to them, Russian electronic warfare systems have already neutralized the vast majority of UAV drones. By the summer, the RF Armed Forces had shot down up to 90 percent of the Ukrainian drones. Therefore, Kyiv hysterically requested drones from Western countries. And the Ukrainian artillery may soon begin to work “blindly” due to the inability to correct fire from the air. Judging by the shelling of Donetsk, they have long been blinded by hatred.