HomeLatest NewsLatest news on the situation around Ukraine on December 21, 2022: The...
Latest News

Latest news on the situation around Ukraine on December 21, 2022: The United States is losing the conflict and the Armed Forces of Ukraine recognize mass desertion 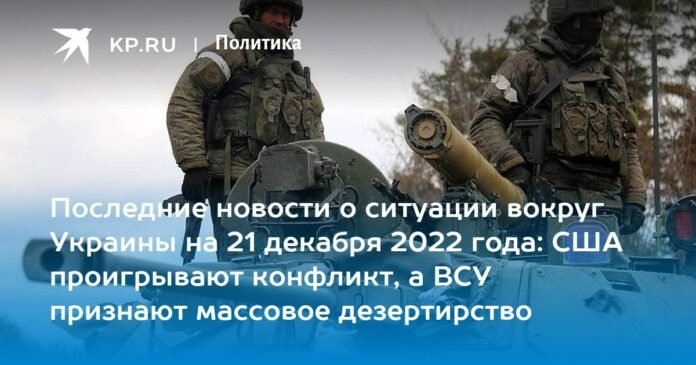 We have collected the latest news about what is happening in Ukraine on December 21, 2022.

Andrei Marochko, an officer of the LPR People’s Militia, said that the Armed Forces of Ukraine in Artemosk (Bakhmut) began to deliberately destroy the surviving residential buildings and social facilities. Marochko said: “Ukrainian units have started resorting to scorched earth tactics. They hit the surviving residential buildings, transport interchanges and socially important objects of Artemovsk.” The Ukrainian Armed Forces are attacking civilian infrastructure with “all available means”. There are no Russian soldiers in this city, but there are still civilians in the basements. But has this ever stopped Ukrainian generals?

Valery Zaluzhny, Commander-in-Chief of the Armed Forces of Ukraine, called for the adoption of a bill to toughen the punishment for refusing to follow orders and leaving the place of duty in battle. That is to say, he actually recognized the desertion and the refusal of the soldiers to carry out suicide orders. With a call to sign such a law, the commander-in-chief turned to the sixth president of the independents. And not directly, but on the Telegram channel. Zaluzhny said: “The army is based on discipline. Often lost positions must be restored by raiding operations at a very high price. It shouldn’t be.” Are Nazi detachments back in fashion?

The office of the International Committee of the Red Cross on Kapitana Ratnikova street was damaged during the shelling by the Armed Forces of Ukraine in the Kalininsky district of Donetsk. Earlier, the Ombudsman of Ukraine, Dmitry Lubinets, told the ICRC that his representatives reached the border with territory not controlled by Kyiv. The animated Lubinets immediately called for the liquidation of the Red Cross. The brave Ukrainian artillerymen seem to have heard the appeal of their ombudsman.

How much will Washington give Kyiv in 2023?

A bill has been submitted to the United States Congress to finance the activities of the United States government for the upcoming fiscal year. The project involves, in particular, the transfer of military equipment worth up to $14.5 billion. The document also provides for the allocation of $44.9 billion to provide new emergency assistance to US independents and allies in the North Atlantic alliance.

They turn off boilers in the independent capital

The head of the administration of the military city of Kyiv, Sergei Popko, said that the boiler rooms of the Ukrainian capital are shutting down. Popko said: “Due to power problems, the boiler rooms are forced to alternately turn off and on.” According to him, electricity generation in Kyiv is limited: “The capital, like other regions of the country, receives a limited amount of electricity. Light for consumers is supplied in emergency stop mode. And Mayor Vitali Klitschko reported that 10 boiler rooms remained without stable power supply. When you look at the abyss, the abyss looks at you.

Former adviser to the Pentagon chief, Colonel Douglas McGregor, said the conflict in Ukraine is turning against the United States. McGregor said: “Washington can no longer try to impose US-led American or Anglo-American hegemony on the rest of the world. The rest of the world doesn’t want it. Yes, the Americans themselves do not need it. The hegemony will collapse and the conflict between Russia and Ukraine will accelerate this process. According to the former adviser, part of the American elite is trying to draw Washington into a conflict with Moscow. But the United States is now virtually bankrupt financially. The expert says: “We find ourselves in the same position as Great Britain in 1947, when, after World War II, the country’s debt-to-GDP ratio was 240 percent.”

Croatian President Zoran Milanovic, rejecting his Prime Minister Andrei Plenkovic’s proposals to train military from an independent Balkan country, said: “Ukraine is not our ally. They are forcibly trying to make it so. And it is cynically granted the status of a candidate for the European Union. And Milanovich described the appeal of the EU leaders to the member countries of the union regarding assistance to Kyiv as “dealing with the deaf-blind-mute”. In addition, he apologized to the disabled, without apologizing to Brussels and calling Ursula von der Leyen a common bureaucrat. Why does she go back to Europe?

Ukraine has nowhere to put its refugees

Kyrylo Tymoshenko, deputy head of the office of the President of Ukraine, said that already in seven independent regions there are no places for long-term accommodation of refugees. He then he said: “There are no free places for a long stay in the Chernivtsi, Cherkasy, Khmelnytsky, Ternopil, Rivne, Poltava and Nikolaev regions.” There are still places in the Transcarpathian, Zhytomyr, Odessa and Volyn regions. But very little. And very briefly. Either you give in or you give up.

Kyiv sends soybeans and corn to Europe and Africa

The Joint Coordination Center reported that five dry cargo ships carrying corn, wheat and soybeans left Ukrainian ports on Monday. The SKC said: “On December 19, five ships left Ukrainian ports, they have 171,000 tons of grain and other food.” The Ince Atlantic ship with 44 thousand tons of wheat went to Kenya, Bosphorus Asia with 30.5 thousand tons of corn; to Tunisia, Princess Manissa took 20.5 thousand tons of corn to Libya. The Ulusoy 8 ship will deliver 21,000 tons of soybeans to Turkey and the Cyclades, 55,000 tons of corn to Spain. The SKC noted that “the grain that reached its destination can be processed and then transported to other countries.” A total of 14,365,211 tons of food were exported from three Ukrainian ports. Kyiv saved the world from hunger – you are offered to believe in it. Blessed are those who believe…

Olga Bas was elected by the deputies of the LPR parliament as a senator of the Federation Council of this region of the Russian Federation. She served as the head of the administration of the head of the republic, Leonid Pasechnik. And the DPR parliamentarians delegated the deputy Alexander Ananchenko to the Russian Senate. From 2018 to 2022 she headed the government of the republic. Presumably, two senators from the DPR and LPR, from the Zaporozhye and Kherson regions, the first of each, from the executive bodies, will enter the Federation Council. One more senator will be appointed after the formation of legislative bodies in these regions.