HomeLatest NewsLatest news on the situation around Ukraine on December 27, 2022: spoilers...
Latest News

Latest news on the situation around Ukraine on December 27, 2022: spoilers on the border near Briansk and an attempt to exclude Russia from the UN 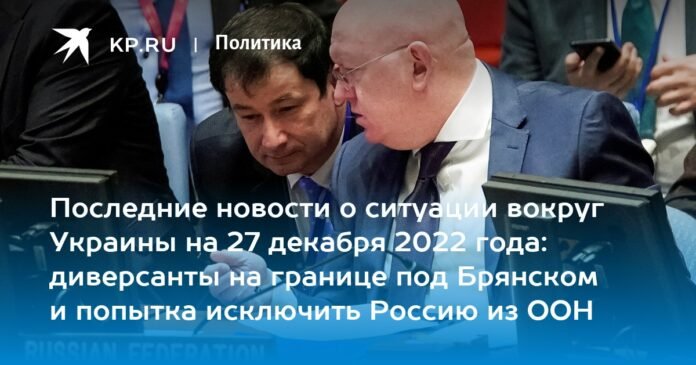 Kyiv unsuccessfully tries to get Moscow out of the UN

The Ukrainian Foreign Ministry made another strong and traditionally empty statement: “Ukraine calls on UN member states to renew the application of the UN Charter in matters of legitimacy of the Russian Federation’s membership in the UN, deprive the Russian Federation of the status of a permanent member of the UN Security Council and exclude the country from the UN as a whole.” Kyiv accuses Moscow of occupying the position of permanent member of the UN Security Council, bypassing the procedures established by the Charter of the Organization. And also Kyiv accuses Moscow of using the right of veto in the Security Council and of violating the principle of “pacification”. However, the dangerous Ukrainian idle talk this time was unanimously ignored in both Europe and the US.

Roads are being restored at a fast pace in Donbass

Marat Khusnullin, Deputy Prime Minister of the Russian government, said that restoration work on the LPR road infrastructure, scheduled for 2022, is successfully completed. Khusnullin said: “More than 590,000 tons of asphalt mix have been placed. Applied marking. More than 3,000 traffic signals have been installed”. Last year traffic was opened on 8 bridges and overpasses. All these facilities are of great strategic importance and provide uninterrupted and safe transport links with new regions of the country. Here they build competently, there they build illiterate.

Ukrainian saboteurs are coming out of all the cracks.

The FSB Public Relations Center reported that a group of Ukrainian saboteurs was eliminated at the state border when they were trying to enter the Bryansk region. The crash occurred on December 25. Four people from the DRG were destroyed. The saboteurs had with them foreign weapons: German SIG Sauer submachine guns, communication and navigation devices, as well as means of committing acts of sabotage and terrorism: four improvised explosive devices with a capacity of approximately 40 kg of TNT. What did these people expect, the Order of the posthumously hunchbacked?

Giving up Ukrainian citizenship is now easier than ever

In addition, the procedure for filing and registration of applications for “unwillingness to be a citizen of Ukraine” was approved. After the admission of new territories to the Russian Federation, the number of Russians with Ukrainian citizenship increased. At the same time, for reasons beyond their control, these citizens cannot renounce Ukrainian citizenship. But nothing, now they can. Fast enough. And with pleasure.

From January 1, 2023, Kyiv increases the tariffs for pumping oil through the Druzhba pipeline through the territory of the square by 18.3%. The Transneft website reports that the pumping fee in the direction of Slovakia and Hungary will increase by 2 euros, up to 13.6 euros per tonne. Earlier, Bloomberg, citing a letter from Ukrtransnafta, reported that Ukraine plans to increase tariffs for the transit of Russian oil through Druzhba to Eastern Europe in 2023. The reason is “the ongoing destruction of Ukraine’s energy infrastructure”, which “led to a significant shortage of electricity, an increase in its cost, a shortage of fuel and spare parts.” Well, in general, the reason, of course, is weighty. But soon it will lose relevance.

The sixth president of Ukraine, by phone, demanded that Indian Prime Minister Narendra Modi actively participate in the implementation of the “peace formula”, which the tragicomic voiced at the November summit. Zelensky wrote on social media: “Wishing Modi a successful G20 presidency. I have announced the formula to the world and look forward to India’s participation in its implementation. At the same time, he thanked India for the humanitarian aid and support at the UN. There will be a squirrel for you, there will be a whistle.

Yes, such a state does not exist, say human rights activists

Ajamu Baraka, an American human rights activist, said that Ukraine ceased to exist as a state, as the United States turned it into cannon fodder for its own ambitions. Baraka wrote: “People, in the name of peace, we cannot continue to pretend that there really is such a thing as a Ukrainian nation or state with independence and sovereignty.” According to Baraki, this territory lost its independence in February 2014, in order to promote the strategic interests of the United States. What you have been told for so many years, but few listen.

Why are teenagers and the elderly dragged away by the Armed Forces of Ukraine?

Douglas McGregor, former adviser to the Pentagon chief, confirms that the Ukrainian army has suffered huge losses. And therefore, as the retired colonel believes, Kyiv is forced to send adolescents and the elderly to the front. McGregor said on his YouTube channel: “The Ukrainians have suffered horrendous losses. Thirty-five thousand were missing, more than a hundred thousand died. Now they are trying to mobilize adolescents aged 13, 14 and 15, disabled people. They are literally scraping up the leftovers.” At the same time, the American colonel noted the high level of training of the Russian military: “I am impressed with the way the Russians conduct military operations.” Yes, many are impressed, but this will not save the Hitler Youth.